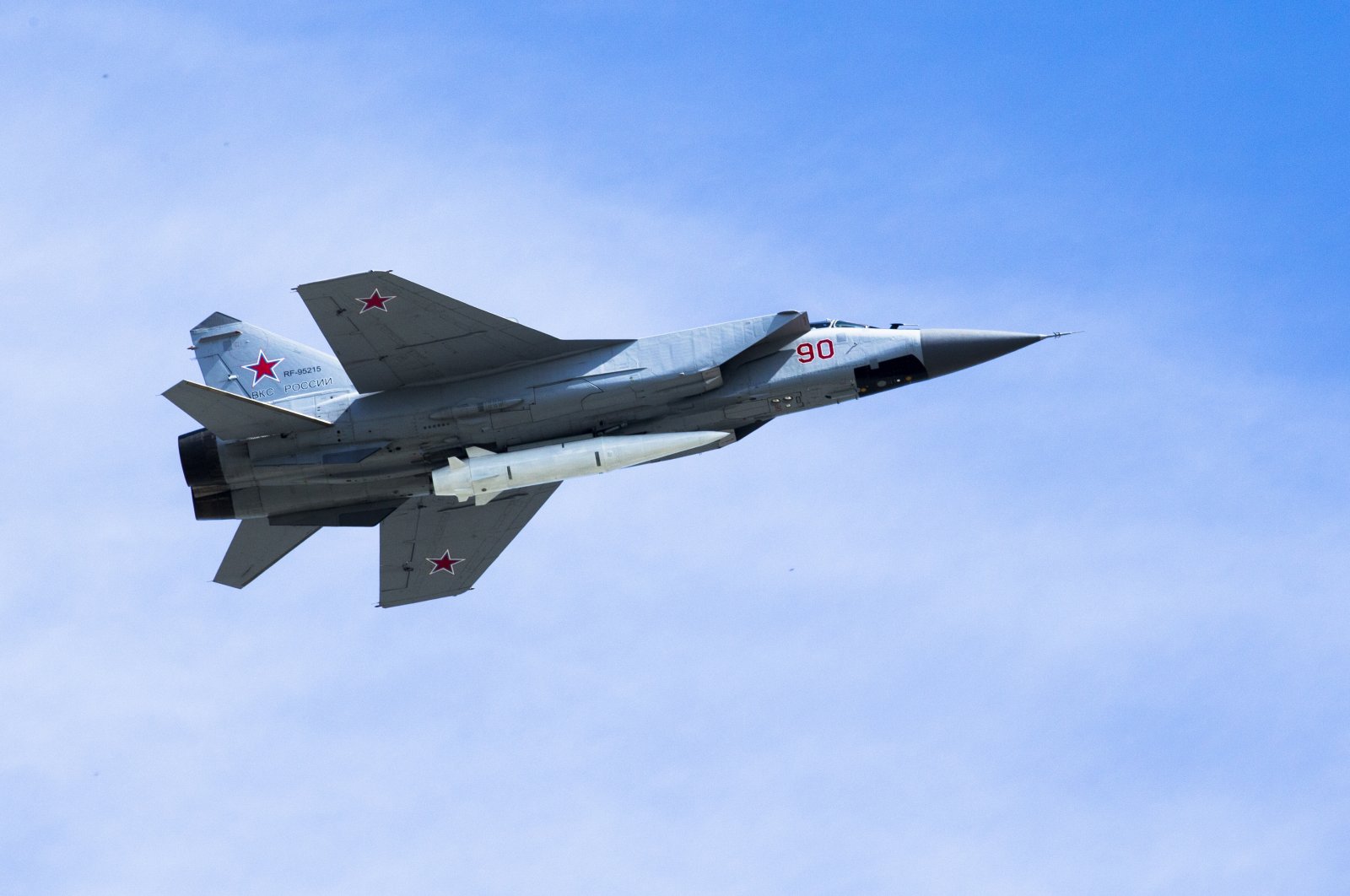 A Russian Air Force MiG-31K jet carries a high-precision hypersonic aero-ballistic missile Kh-47M2 Kinzhal during the Victory Day military parade to celebrate 73 years since the end of WWII and the defeat of Nazi Germany, in Moscow, Russia, May 9, 2018. (AP Photo)
by ASSOCIATED PRESS Jun 25, 2021 4:24 pm
RECOMMENDED

Russia launched Friday drills in the Mediterranean Sea featuring warplanes capable of carrying hypersonic missiles, a show of force amid a surge in tensions following an incident with a British destroyer in the Black Sea.

Moscow said one of its warships fired warning shots and a warplane dropped bombs in the path of British destroyer Defender Wednesday to force her out of an area near Crimea that Russia claims as its territorial waters. Britain denied that account insisting its ship wasn’t fired upon and said it was sailing in Ukrainian waters.

The Russian drills that began Friday in the Eastern Mediterranean come as a British carrier strike group is in the area. Earlier this week, British and U.S. F-35 fighters from HMS Queen Elizabeth flew combat sorties against the terrorist group Daesh.

Russia has waged a military campaign in Syria since September 2015, allowing Bashar Assad’s regime to reclaim control over most of the country after a devastating civil war.

The Russian Defense Ministry said that a pair of MiG-31 fighter jets capable of carrying Kinzhal hypersonic missiles arrived at the Russian airbase in Syria for the exercise. The Hemeimeem airbase, in the coastal province of Latakia, serves as the main hub for Moscow’s operations in the country.

It's the first time the warplanes capable of carrying Kinzhal have been deployed outside Russia's borders.

The military says the Kinzhal flies at 10 times the speed of sound and has a range of up to 2000 kilometers (about 1,250 miles).

The Defense Ministry said the maneuvers in the Eastern Mediterranean involve several warships, two submarines and long-range Tu-22M3 bombers along with other combat aircraft. The supersonic, nuclear-capable Tu-22M3s were first deployed to Syria last month in a demonstration of an increased Russian military foothold in the Mediterranean.

The Russian military has modernized the runway at Hemeimeem to accommodate heavy bombers and built a second one to expand the operations there.

Russia also has expanded and modified a naval base in the Syrian port of Tartus, the only such facility that Russia currently has outside the former Soviet Union.

The Russian military has increased the number and scope of its drills amid a bitter strain in relations with the West, which have sunk to post-Cold War lows after Moscow’s 2014 annexation of Ukraine’s Crimean Peninsula. As part of President Vladimir Putin’s efforts to beef up Russia’s military, the Russian navy in recent years has revived the Soviet-era practice of constantly rotating its warships in the Mediterranean.

Speaking to reporters Sunday aboard HMS Queen Elizabeth, Commodore Steve Moorhouse said the Eastern Mediterranean has become more "congested and contested” with the heavier Russian military presence in Syria, resulting in regular encounters with Russian ships and warplanes. He noted that a Russian warship has come within 10 kilometers (16 miles) of the carrier.