Scottish vote could put independence back on table 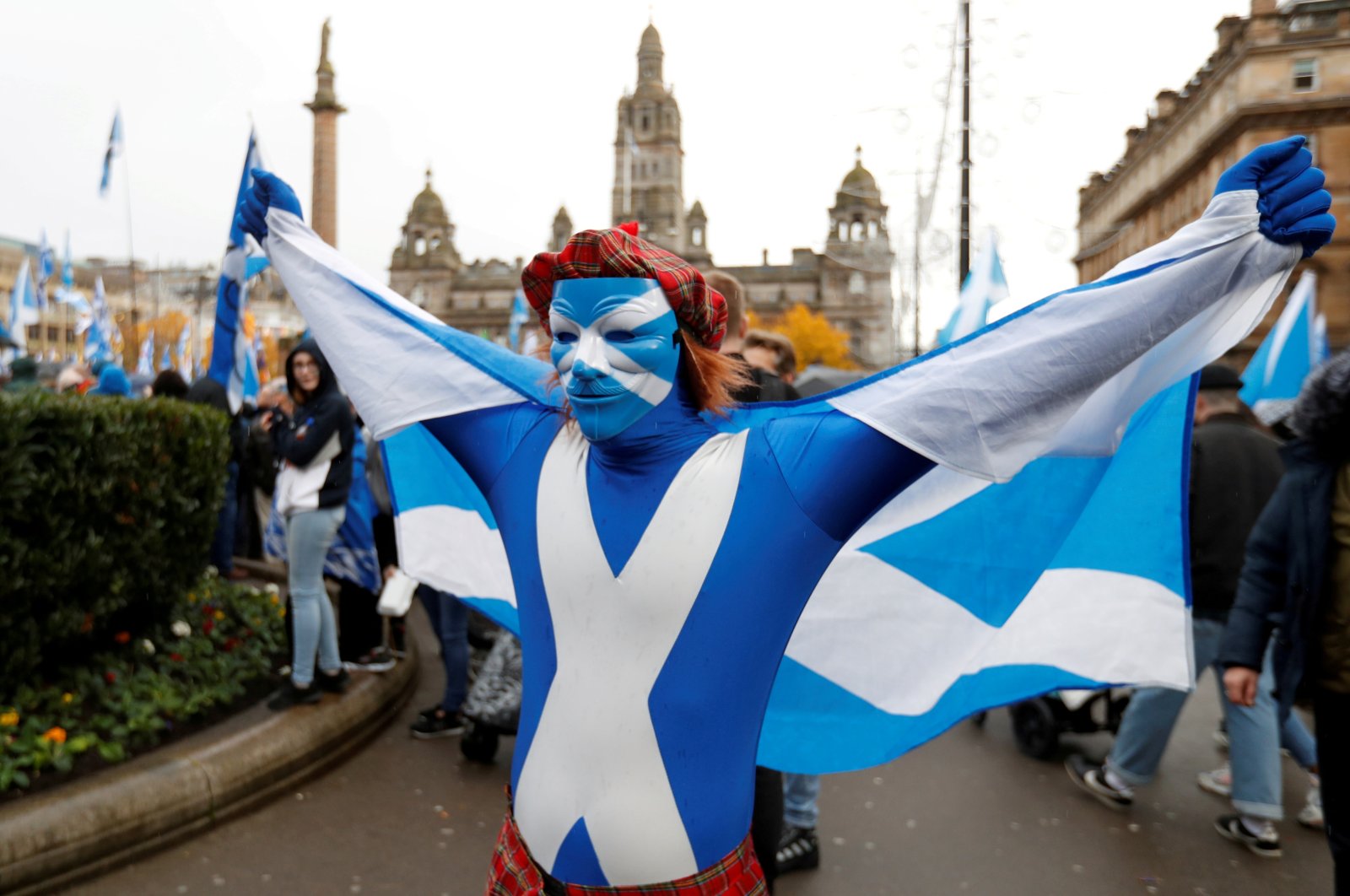 A demonstrator holds a flag during a pro-Scottish Independence rally in Glasgow, Scotland, Nov. 2, 2019. (Reuters Photo)
by Anadolu Agency May 05, 2021 1:49 pm
RECOMMENDED

A second referendum for an independent Scotland could be a possibility after the May 6 parliamentarian elections if pro-independence parties win the majority seats.

Scottish National Party (SNP) leader Nicola Sturgeon has repeatedly said her country would not be dragged out of the EU and she would initiate a second independence referendum, dubbed indyref2.

In her latest campaign, she said they would concentrate on recovery from the effects of the pandemic and decide on what kind of future they want to have.

Catriona MacDonald, the SNP's candidate for the Edinburgh Southern constituency, thinks that if the majority of the new Scottish government is formed by pro-independence members of the country's parliament, the central government in London should respect their demand to hold a second referendum.

Speaking to Anadolu Agency (AA), MacDonald said: "Brexit was something Scottish people had rejected (...). We knew it would have a serious impact on Scotland's economy."

"We have already seen that impact in many areas. For example, the fishing industry has really struggled since Brexit, we have seen exports dropping as a result of the fact that there are now barriers in trading with the EU."

She said Scotland saw the immediate negative effects of Brexit despite the country having voted against it.

Speaking on a possible second independence referendum, the SNP candidate said the decision on the future of Scotland should be "in our hands."

"I believe that Scotland would be a successful, wealthy, international and independent nation in the future," she said, voicing support for independence, as an SNP candidate.

"We believe that the full powers of independence are crucial to a sustainable recovery from the pandemic and for us to take our place in the world as the kind of welcoming, international nation we would like to be."

MacDonald reiterated: "If Scotland returns as a majority of pro-independence MSPs (members of Scottish Parliament) this week, then we would expect Boris Johnson and the U.K. government to respect that democratic choice and work with us to hold a referendum in the smoothest and easiest possible way."

Miles Briggs, a Conservative member of the Scottish Parliament for the Lothian region since 2016 and candidate for the same constituency on Thursday, thinks such a referendum on Scotland's independence would be "divisive."

Briggs told AA that Brexit was never going to be easy, but the government did work to sign a Brexit deal and bring a transition period.

"This was delivering what the people had voted for," he added.

Briggs said a second independence referendum would be divisive and therefore his party, the Scottish Conservatives, "have been standing to try to make sure that we move on from those divisions."

Briggs said it was time to move on and focus on Scotland's recovery from the coronavirus pandemic.

"That should be our number one focus, but not another divisive referendum."

He said that if SNP leader Nicola Sturgeon goes forward with a wild-cat referendum, this would not be good for Scotland and stability.

The first referendum that asked Scottish voters whether they would want to break free from the U.K. was held in 2014, a mere two years before the historic EU referendum.

The government under then-Prime Minister David Cameron pledged a better understanding for Scots from Westminster and "extensive new powers" for the Scottish Parliament.

The SNP, then leading the independence campaign, had full confidence that the country would survive and be even better off outside the U.K., strengthened by the nation's oil fields in the North Sea, world-famous malt whiskey, textiles, jet engines and various banking and financial services.

But, Scots rejected separation from the rest of the U.K., as just over 2 million votes (55.3%) were cast to remain part of the kingdom, while 1.62 million (44.7%) people voted for independence.

Sitting British Prime Minister Boris Johnson and the Scottish Tories have repeatedly rejected the idea of indyref2, calling the 2014 referendum a "once-in-a-lifetime" event that proved Scots prefer the union.