UK police under fire after crackdown on mourners for killed woman 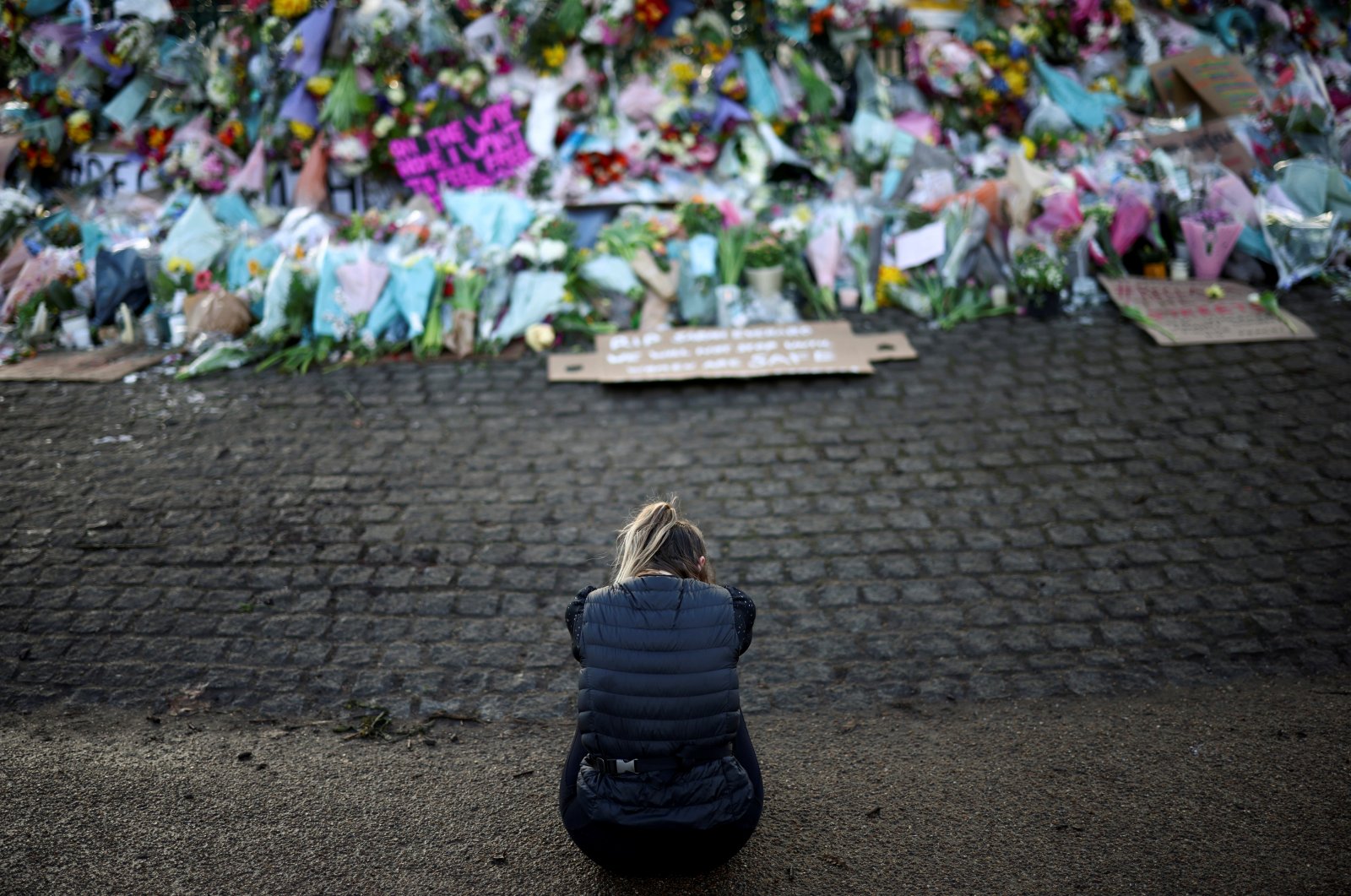 A mourner sits in front of a memorial site at the Clapham Common Bandstand, following the kidnap and murder of Sarah Everard, in London, Britain, March 14, 2021. (Reuters Photo)
by French Press Agency - AFP Mar 14, 2021 1:18 pm
RECOMMENDED

Police in London drew widespread criticism on after handcuffing mourners at a vigil for a woman who was murdered after setting out to walk home, in a case that has sparked national fury about violence against women in the U.K.

Officers scuffled with some members of the hundreds-strong crowd that gathered despite coronavirus restrictions for a candlelit tribute late Saturday close to the spot where 33-year-old marketing executive Sarah Everard disappeared on March 3.

Reclaim These Streets – who initially organized the event in south London's Clapham – condemned the actions of officers "physically manhandling women at a vigil against male violence."

Social media footage showed police restraining and handcuffing some mourners, leading to an outpouring of criticism from across the political spectrum.

Both Home Secretary Priti Patel and London Mayor Sadiq Khan said they had asked for explanations from the Metropolitan police over how the vigil was handled.

And Liberal Democrats leader Ed Davey called for Metropolitan Police Commissioner Cressida Dick to resign, having "lost the confidence of millions of women in London."

On Sunday, Dick, who is the first woman to head the force, said she was personally appalled by the attack on Everard and she was more determined than ever to lead the organization, reported The Associated Press (AP).

She said she fully understood the strength of feeling in response to Everard's case, but stressed that Saturday's vigil was an unlawful gathering and officers had been put in a "very difficult position" trying to police a protest during a pandemic.

She said that as big crowds gathered, officers needed to act to counter the considerable risk to people's health. She added that she welcomed a review into her force's operations.

The murder of Everard, who vanished after setting out to walk home from a friend's flat, has shocked the country and brought discussion around women's safety to the fore once again.

Wayne Couzens, 48, a serving officer in the Metropolitan Police's elite diplomatic protection unit, appeared in court earlier on Saturday charged with kidnap and murder following his arrest at his home in Kent, southeast England. The victim's body was discovered in nearby woods.

Organizers had canceled the vigil after police outlawed it because of COVID-19 restrictions, but hundreds still turned out, with tensions overspilling as Saturday night fell.

Mourners shouted "shame on you" at police, with tensions running high as a man arrested in connection with the murder is an officer.

In the hours following the vigil, rage mounted with pressure groups and politicians condemning police actions.

Opposition Labour MP Harriet Harman condemned the "terrible" scenes at Clapham in a tweet, adding: "Met mishandled vigil plan from the outset. They should have reached agreement."

Caroline Nokes, the conservative chair of the women and equalities committee, said she was "truly shocked at the scenes from Clapham Common – in this country we police by consent, not by trampling the tributes and dragging women to the ground."

And feminist direct action group Sister's Uncut tweeted late Saturday that "Metropolitan police officers waited for the sun to set before they started grabbing and manhandling women in the crowd."

Many more joined in a virtual tribute, including Prime Minister Boris Johnson and his partner, who lit a candle for Everard.

"I cannot imagine how unbearable their pain and grief is. We must work fast to find all the answers to this horrifying crime," he tweeted.

"I will do everything I can to make sure the streets are safe and ensure women and girls do not face harassment or abuse."

Earlier on Saturday Prince William's wife Kate visited the bandstand at Clapham Common, which has turned into a shrine for the victim.

Everard had visited friends in Clapham and was returning home to Brixton, about a 50-minute walk away, when she disappeared around 9:30 pm.

The case has caused a political fallout, with MP Jess Phillips this week reading out the names of 118 women murdered last year.