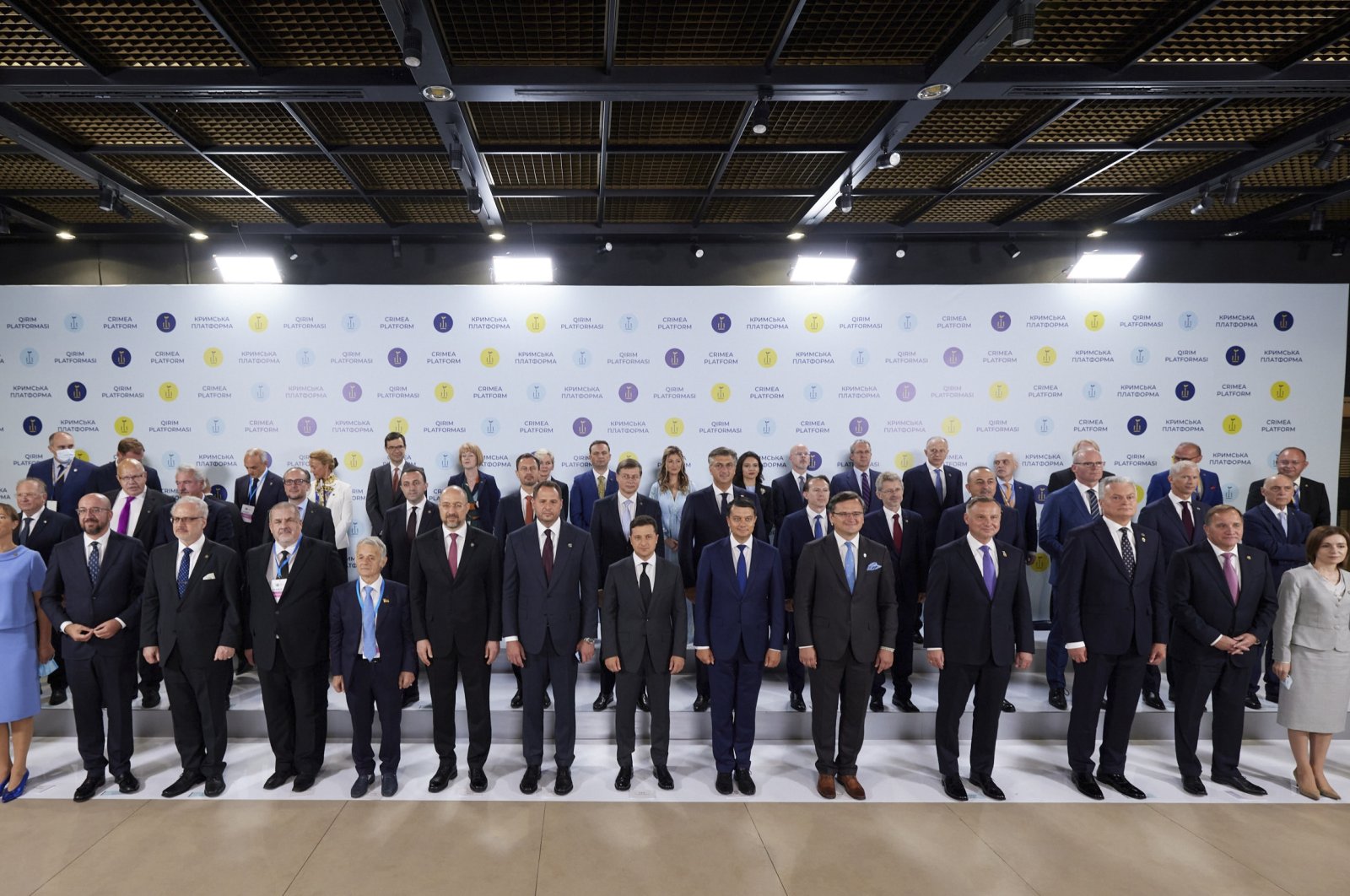 More than seven years after the annexation of Crimea by Russia, Ukraine's president vowed to do all he can to bring back the peninsula, urging international allies to support the effort on Monday.

President Volodymyr Zelenskyy spoke at the Crimean Platform summit, called by Ukraine to build up pressure on Russia over the 2014 annexation that has been denounced as illegal by most of the world. Russia's relations with the West have sunk to post-Cold War lows as a result.

In his opening remarks, Zelenskyy promised to "do everything possible to return Crimea, so that Crimea, together with Ukraine, becomes part of Europe.”

"For this we will use all possible political, legal and first and foremost diplomatic means," Zelenskyy said, adding that Kyiv needs "effective support at the international level.”

Top officials from 46 countries and blocs took part in the summit, including representatives from the United States, the European Union and Turkey.

During the summit Turkish Foreign Minister Mevlüt Çavuşoğlu stressed that his country has never recognized the illegal occupation of Crimea and will not recognize it, underlining Ankara's support for Ukraine's territorial integrity.

"We have never recognized the illegal annexation of Crimea and we constantly emphasize that we will not. Just saying that is not enough. We express the territorial and border integrity of Crimea and Ukraine with other friendly and allied countries that support Ukraine, and we emphasize our support," Çavuşoğlu said in Kyiv, expressing confidence over the platform's vital role in defending the rights of Crimea and Crimean Tatars, and in protecting Ukraine's border integrity.

"We are working hard to further develop our relations in different fields. I will come to Ukraine again in October to hold the Joint Strategic Planning Meeting with my dear friend (Foreign Minister) Dmytro Kuleba," he said, adding that there are excellent bilateral relations between Ankara and Kyiv.

Kremlin spokesperson Dmitry Peskov denounced the summit as an "anti-Russian event.” According to the Deutsche Presse-Agentur (dpa), Russia's Foreign Minister Sergey Lavrov described the meeting as a "Witches' Sabbath."

Zelenskyy charged that Russia has turned Crimea into a "military base" and "a foothold for Russia to boost its influence on the Black Sea region.” He said Moscow has tripled its military presence in Crimea, as The Associated Press (AP) reported.

In April, Russia increased troops near its borders with Ukraine, including in Crimea, eliciting international outrage. On June 23, Russia said one of its warships in the Black Sea fired warning shots and a warplane dropped bombs in the path of the HMS Defender, a British Royal Navy destroyer, to chase it away from an area near Crimea that Moscow claims as its territorial waters.

Britain, which like most other nations didn’t recognize the annexation of Crimea, insisted the Defender wasn’t fired upon and said it was sailing in Ukrainian waters. All 30 NATO member states were represented at the summit.

"Occupation of Crimea casts doubts on the effectiveness of the entire international security system,” Ukraine's president said. "Without restoring the trust in it, not a single state can be sure that it wouldn't become the next victim of occupation.”

According to a statement by his ministry, German Economics Minister Peter Altmaier reiterated "that the German government, together with its EU partners, is firmly committed to the territorial integrity of Ukraine and to the non-recognition of Russia's annexation of Crimea, which is contrary to international law, as well as to the maintenance of the Crimean sanctions on Russia."

EU Council President Charles Michel said, "Our task is to ensure that the annexation is never legalized."