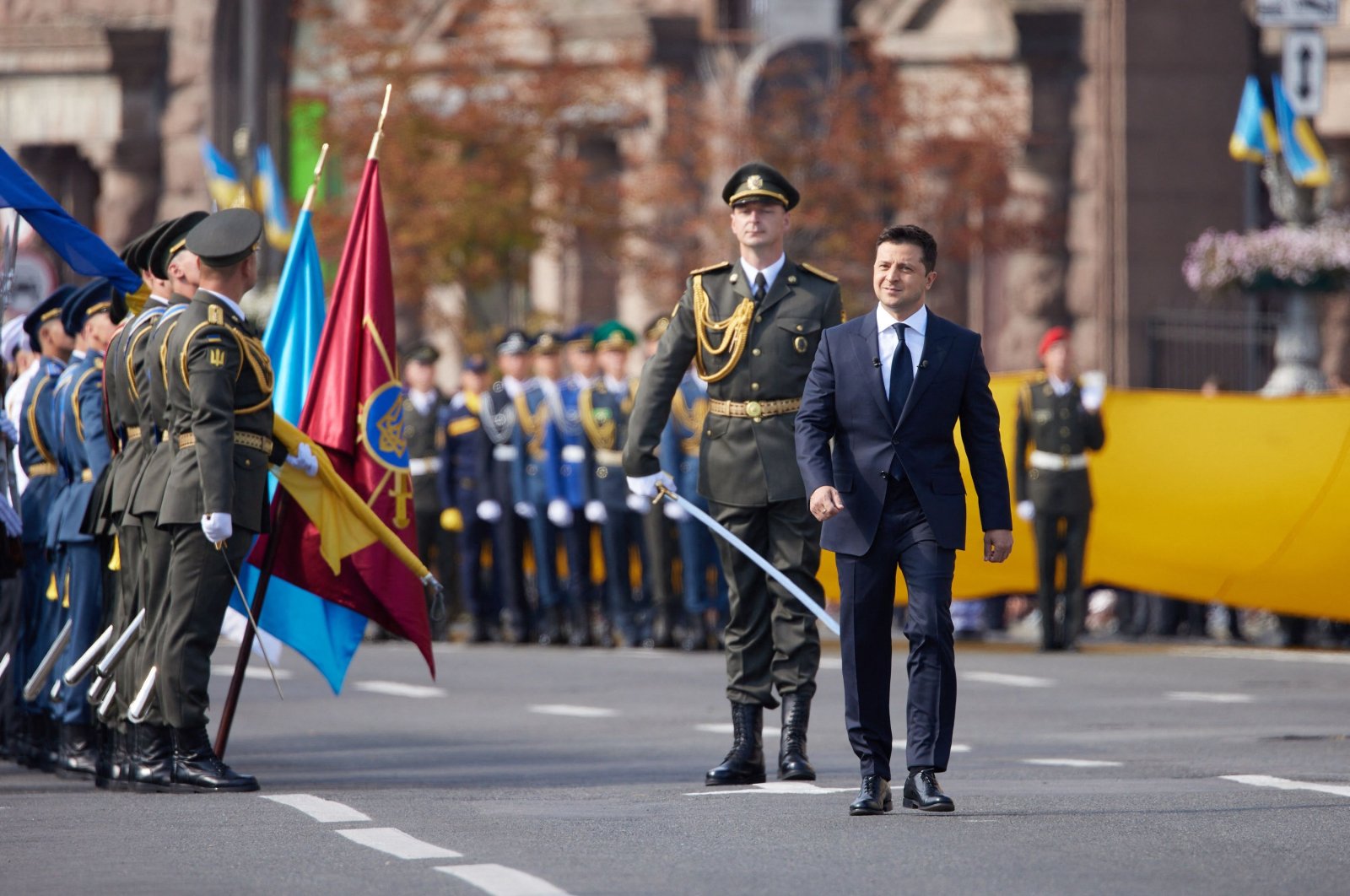 The Ukrainian president on Tuesday called for stronger ties with the European Union and NATO in an address celebrating the 30th anniversary of Ukraine's independence.

Ukraine marked its independence day on Tuesday with a military parade and massive festivities in the capital Kyiv. Opening the parade, President Volodymyr Zelenskyy said that a strong Ukraine is “a country that dreams ambitiously and acts decisively.”

“Such a country becomes NATO's Enhanced Opportunities Partner; such a country is officially supported by others when it applies to join the European Union," Zelenskyy said.

Ukraine didn't officially become independent until the collapse of the Soviet Union in December 1991. But like most of the 15 former Soviet republics, it declared its sovereignty immediately after the failed hard-line coup against reformist Soviet President Mikhail Gorbachev.

On Aug. 24, 1991, the Ukrainian parliament adopted the Act of Declaration of Independence of Ukraine, reestablishing the country’s independence after more than 70 years of being part of the Soviet Union. Less than four months later, Boris Yeltsin and leaders of other Soviet republics declared the Soviet Union defunct and Gorbachev stepped down on Dec. 25, 1991.

The 30th anniversary of Ukraine's independence came as the country is locked in a bitter tug-of-war with Russia, which in 2014 annexed Crimea and has since been backing a separatist insurgency in eastern Ukraine, and Kyiv’s efforts to shore up support among Western nations.

“Territories may be occupied, but one can't occupy the people's love for Ukraine. One can create a desperate situation and make people get (Russian) passports, but one can't issue passports for their Ukrainian hearts,” Zelenskyy said Tuesday. “If some people in Crimea and Donbass (region in eastern Ukraine, controlled by Russia-backed separatists) are afraid to talk about it, it doesn't mean they are afraid to think about it. They will come back, because we're family.”

The center of Kyiv on Tuesday turned into a large venue for concerts and other festive events marking the anniversary. Thousands of people flocked to the central Maidan square, which over the past 30 years has been a rallying point for Ukrainians.

The popular uprising of 2013-2014, which ousted pro-Russia President Viktor Yanukovych and triggered the yearslong confrontation with Moscow, started on Maidan square.

Delegations from 46 countries and blocs, including 14 presidents, attended the parade in Kyiv. The day before, they took part in the Crimean Platform summit called by Ukraine to build up pressure on Russia over the 2014 annexation of Crimea that has been denounced as illegal by most of the world.

The annexation and Moscow’s backing of rebels in the east of Ukraine, where more than 14,000 have been killed since 2014 in the fighting between separatists and Ukrainian forces, plunged Russia’s relations with the West to post-Cold War lows. The tensions rose once again this year after Russia increased troop numbers near its borders with Ukraine, including in Crimea, eliciting international outrage.

Russian President Vladimir Putin published an article last month, describing Russians and Ukrainians as “one people” and accusing the West of working methodically to rupture historic links between the two neighbors and to turn Ukraine into a key bulwark to contain Russia.

But polls in Ukraine show that the vast majority of Ukrainians support the independence of the country. If a referendum on Ukraine's independence was held this year, 70.3% of the country's residents would vote for it, according to a survey of the prominent Kyiv International Institute of Sociology.

“The generation of Ukrainians, born both in the west and the east of the country after it became independent, see themselves as a separate European nation that is not tied to the myths of the Soviet era and is indifferent to the Kremlin's pleas about the common past,” the institute's director, Volodymyr Paniotto, told The Associated Press (AP).

Paniotto said that Zelenskyy's generation, as well as younger Ukrainians, have a “pro-Western mindset and will determine Ukraine's path for decades to come – from the Soviet past to a European future.”

Firefighter Serhiy Zhadko, 29, who came to watch the parade with his 7-year-old son, told the AP that “Ukrainians had to (go through) two revolutions in order to finally choose their path to Europe, but we’re ready to defend our choice.”

“Yes, there are lots of problems in Ukraine, there’s a war and poverty, but we look forward and not back on the Soviet past,” Zhadko, 29, said.

NATO and the EU keep mum about when Ukraine can become a member, despite Kyiv's persistence. The EU only went as far as to sign a landmark Association Agreement with Ukraine in 2014, which stipulated free trade and visa-free travel between the two.

Ukraine's Western allies expect Kyiv to keep pushing reforms, including in the judiciary, and the creation of effective anti-corruption mechanisms that would stem the endemic graft in the country.

“Ukrainian democracy is a work in progress which yet to learn the lessons of fighting corruption and to limit the influence of the oligarchs,” Ukrainian political analyst and head of the Penta Center think tank Volodymyr Fesenko told the AP.

“Western partners directly link the speed of (Ukraine's) integration into Euro-Atlantic blocs with success in reforms and the fight against corruption,” he said.