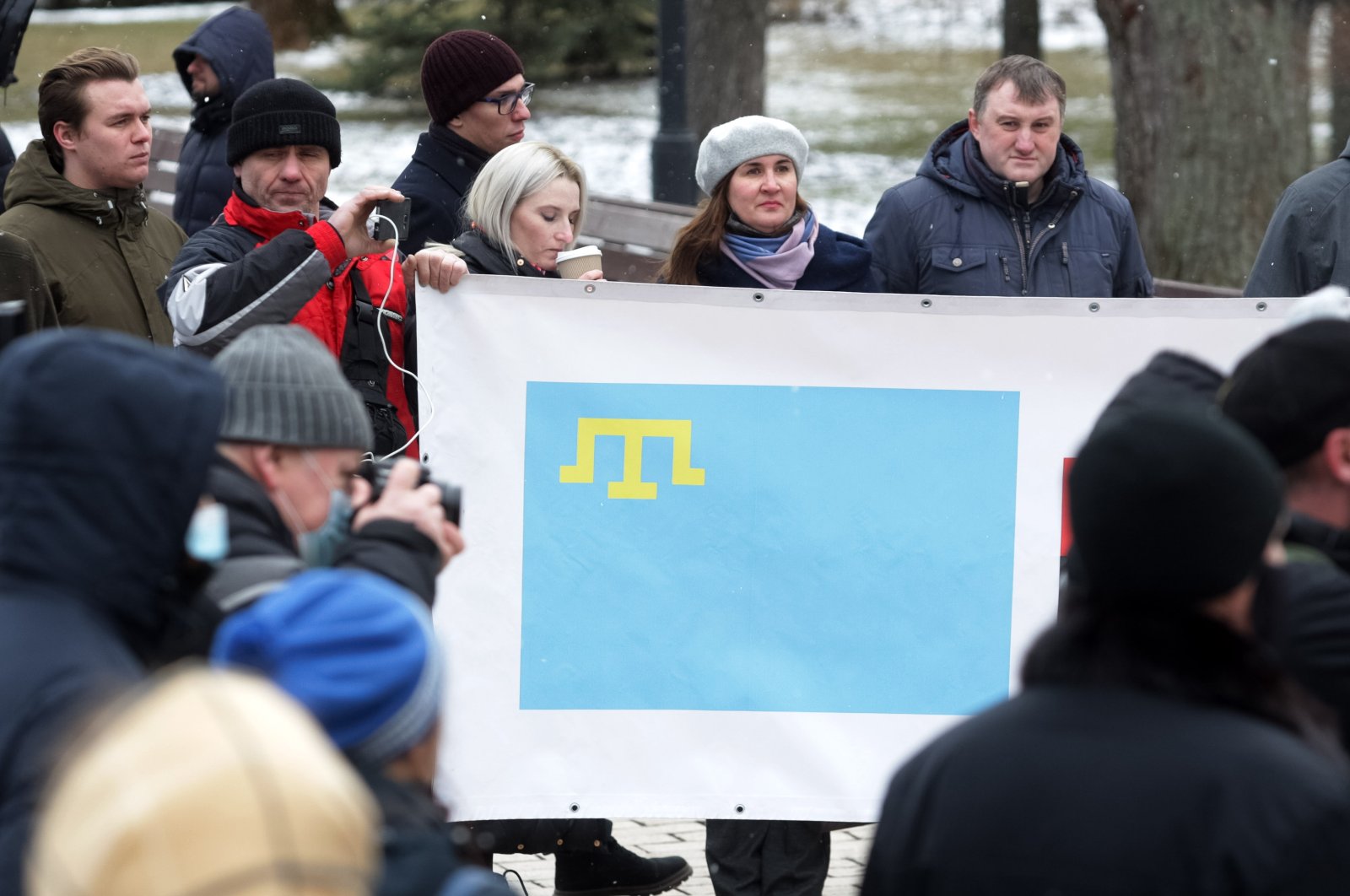 Turkey on Tuesday reiterated that Ankara would not "recognize the de facto situation" in Crimea.

"Ukraine's Autonomous Republic of Crimea was annexed by the Russian Federation, based on an illegitimate referendum held seven years ago today," the Turkish Foreign Ministry said in a statement.

Underlining that the current situation in Crimea "constitutes a breach of international law," the ministry confirmed Turkey's support for Ukraine's sovereignty and territorial integrity.

"On this occasion, we underline one more time the importance we attach to the safety, well-being and the protection of the cultural identity of the Crimean Tatar Turks, who are among the constituent people of Crimea," it said.

The statement added that Ankara would "continue to closely monitor the developments in Crimea."

In 2014, Russia annexed Ukraine's Crimean Peninsula, a move widely viewed as illegal by the international community, including Turkey and the United Nations.

International society did not respond to Russia's illegal annexation of Crimea as expected, according to the national leader of the Crimean Tatar people and Ukrainian deputy on Tuesday.

"I thought the reaction of the world was going to be different, it had to be so strong but unfortunately it wasn't," Mustafa Abdulcemil Kırımoğlu told Anadolu Agency (AA).

Apart from Turkey, the U.S. as well as the U.N. General Assembly, view the annexation as illegal.

Kırımoğlu said he did not think the annexation would last for seven years and added: "I didn't believe that a country will enter your country in the 21st century, occupy it with its tanks and as if it's not enough, it will add your lands to its own."

He said his thought was that Russia would turn Crimea into a puppet government similar to what happened in Georgia in 2008 when Tbilisi fought a five-day war with Russia over Georgia's breakaway regions of South Ossetia and Abkhazia.

Georgia lost control of both areas and Russia later recognized both South Ossetia and Abkhazia as independent states.

Noting that Crimean Tatar Turks were in favor of the integrity of Ukraine then, he said they boycotted the referendum.

"For this reason, the occupiers showed the most oppression to Crimean Tatar Turks. There are around 120 remanded in prisons, 75% of them are Crimean Tatars but our population is only 13% of Crimea," Kırımoğlu said, adding that 95% of house raids, 85%-90% of those who were kidnapped and killed were Crimean Tatars.

Russians would never agree with Tatars, Kırımoğlu noted, stressing that they adopted a policy to "force them to leave."

"They didn't load them in wagons carrying animals and send them to Siberia as in 1944 because we are in the 21st century, but they are applying the policy after the 1783 occupation. There were such pressures then and the majority of our people migrated to the Ottoman lands, especially after the Crimean war," he said.

He said, according to estimates, there are around 3 million to 5 million Crimean Tatar Turks living in Turkey.

They brought many people from Russia to Crimea, he added, noting: "According to official statements of Russians, 205,000 people came (to Crimea), to us, 600,000, while our cognates in Crimea say the number is nearly 1 million."

This is the policy, Kırımoğlu stressed and said even though Russia will need to leave Crimea in the future, their people will stay there.

"They are bringing their people to influence Ukraine's policy," he added while urging Parliament to make the necessary decisions to prevent such influences.

He said that those people shall not be given Ukrainian citizenship and shall be punished for illegally crossing the borders before being returned to their country.

Noting that this year there will be some initiatives within the Crimean Platform, part of Ukraine's strategy of de-occupation of Crimea which started since the peninsula was annexed by Russia, Kırımoğlu said, "There are several parts of Ukraine that are under occupation, 20,000-square-kilometer (7,722-square-mile) Donbas and 26,000-square-kilometer Crimea."

He said invitations were sent to 114 countries to discuss the situation, while the European Union, Canada, the U.K. and the U.S. voiced support for Crimea.

He recalled that when they came to Turkey with Ukrainian President Volodymyr Zelensky last October, a declaration was issued after their meeting with President Recep Tayyip Erdoğan.

"Turkey said it supports the platform 100% and that it will attend it, we are grateful for that," he said.

Stressing that the platform will serve to bring the issue to the world agenda, Kırımoğlu said the fight will continue whether the platform succeeds or not.

Kırımoğlu and the President of the Crimean Tatar National Assembly Refat Cubarov were banned from entering the peninsula after the annexation.

The assembly was branded an "extremist organization" and its activities were banned.

Some 2,500 Crimean Tatars who had direct ties to the assembly, and everyone who had relations with it, were considered members of the "extremist organization."

Due to pressure from the Russian administration, thousands of Crimean Tatars had to leave the peninsula.

Crimean Tatars continue to be detained and evicted from their homes, mosques and kindergartens on charges of being members of a "terrorist organization."