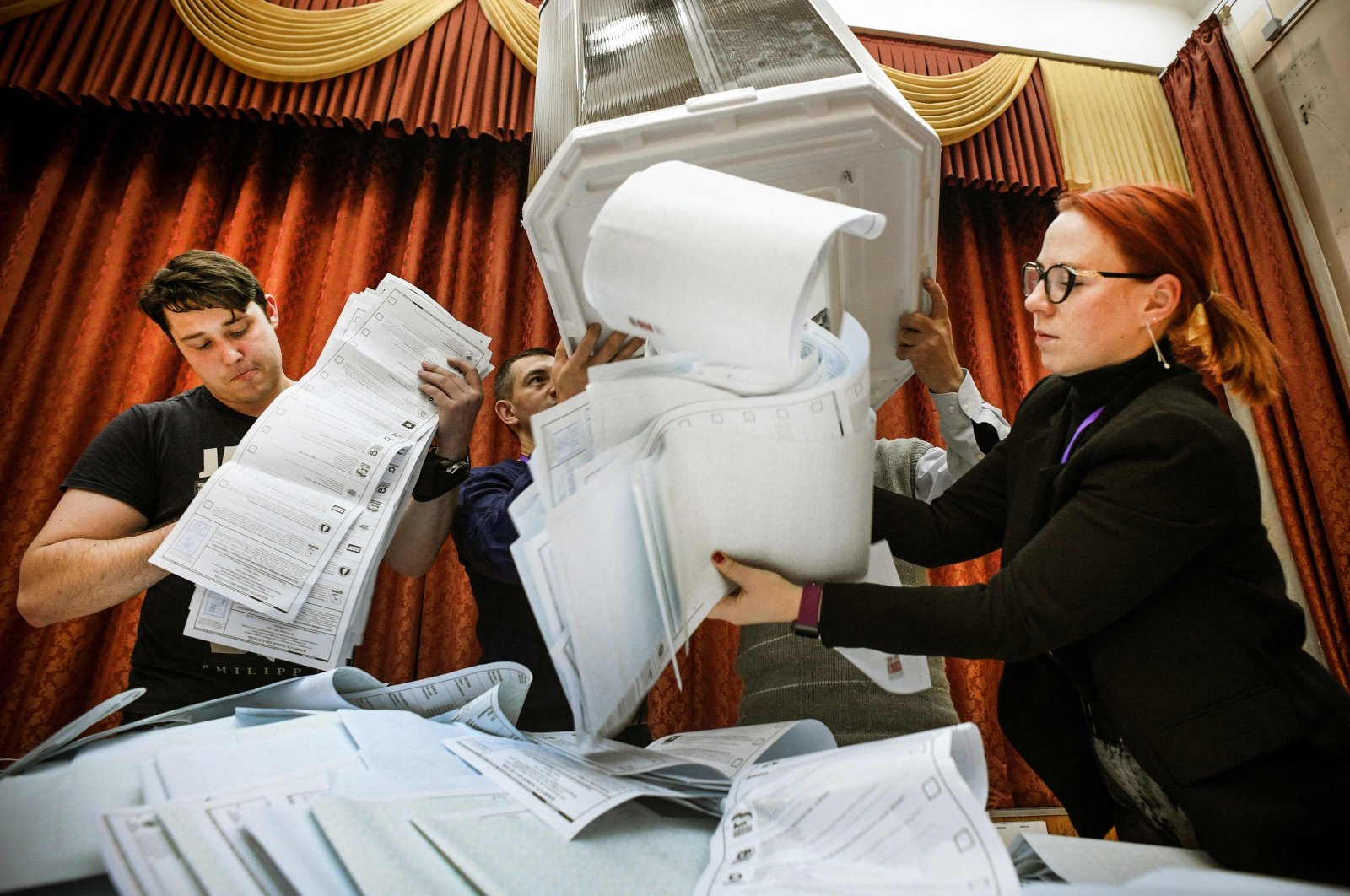 Members of a local electoral commission empty a ballot box at a polling station after the last day of the three-day parliamentary election, in Moscow, Russia, Sept. 19, 2021. (AFP Photo)
by Agencies Sep 20, 2021 8:40 am
RECOMMENDED

Russia's ruling United Russia party, which supports President Vladimir Putin, retained its parliamentary majority after an election and a sweeping crackdown on its critics, despite losing over a 10th of its support, partial results on Monday showed.

Results from about 95% of the country’s polling stations gave the ruling United Russia party 49.64% of the vote for the 225 seats apportioned by parties, according to the Central Election Commission (CEC). Another 225 lawmakers are chosen directly by voters, and the results Monday morning showed United Russia candidates leading in 199 of those races.

Top United Russia official Andrei Turchak suggested that the party will get 315 out of the 450 seats – a result that would give them more than two-thirds of the legislature's seats. In fact, the results indicated there would be almost no opposition voices in the Duma at all, with three other parties that usually tow the Kremlin line set to take many of the remaining seats, along with the New People party, which was formed last year and is regarded by many as a Kremlin-sponsored project.

Cries that the results had been manipulated mounted Monday, when the results of online voting in Moscow were still not available to the public. The results in the other six regions that were allowed to vote online have been released. In Moscow, approvals of the ruling party have always been particularly low and protest voting has been widespread, and Kremlin critics were calling for protests of the vote later in the day.

Any fraud allegations aside, the Kremlin sweep was widely expected since few opposition candidates were even allowed to run this year after Russian authorities unleashed a sweeping crackdown on Kremlin critics.

Although that amounts to an emphatic win, it looks like a somewhat weaker performance for United Russia than the last time a parliamentary election was held in 2016, when the party won just over 54% of the vote, according to Reuters. A malaise over years of faltering living standards and allegations of corruption from jailed Kremlin critic Alexei Navalny have drained some support, compounded by a tactical voting campaign organized by Navalny's allies.

United Russia would have fared worse in a fair contest, given a pre-election crackdown that outlawed Navalny's movement, barred his allies from running and targeted critical media and non-governmental organizations, they said.

Electoral authorities said they had voided any results at voting stations where there had been obvious irregularities and that the overall contest had been fair.

The outcome looks unlikely to change the political landscape, with Putin, who has been in power as president or prime minister since 1999, still dominating ahead of the next presidential election in 2024. Putin has yet to say whether he will run. He was due to speak on Monday. The 68-year-old leader remains a popular figure with many Russians who credit him with standing up to the West and restoring national pride.

The partial results showed the Communist Party finishing in second, followed by the nationalist LDPR party with about 8% and the Fair Russia party with about 7%. All three parties usually back the Kremlin on most key issues. A new party called "New People" appeared to have squeezed into parliament with just over 5%.

At a celebratory rally at United Russia's headquarters broadcast on state television, Moscow Mayor Sergei Sobyanin, a close ally of the Russian leader, shouted: "Putin! Putin! Putin!" to a flag-waving crowd that echoed his chant. Allies of Navalny, who is serving a jail sentence for parole violations he denies, had encouraged tactical voting against United Russia, a scheme that amounted to supporting the candidate most likely to defeat it in a given electoral district.

In many cases, they had advised people to hold their noses and vote Communist. Some Moscow-based Communists who felt cheated called for a protest in the Russian capital on Monday evening. The central square they named as the venue was sealed off by police on Monday afternoon.

"With such a colossal number of violations, the results of the State Duma elections cannot be recognized as clean, honest or legitimate," said Lyubov Sobol, an ally of Navalny whose movement was declared extremist in June by a court, as The Associated Press (AP) said. Electoral authorities said they had voided any results at voting stations where there had been obvious irregularities and that the overall contest had been fair.

Golos, an election watchdog accused of being a foreign agent by authorities, recorded thousands of violations, including threats against observers and ballot stuffing, blatant examples of which circulated on social media, with some individuals caught on camera depositing bundles of votes in urns. The CEC said it had recorded 12 cases of ballot stuffing in eight regions and that the results from those polling stations would be voided.

The European Union said the elections had suffered from intimidation and limited "credible" monitoring, while Germany called for fraud claims to be "clarified."

"One day we will live in a Russia where it will be possible to vote for good candidates with different political platforms," Navalny ally Leonid Volkov wrote on Telegram messenger before polls closed on Sunday.

"I don't see the point in voting," said one Moscow hairdresser who gave her name as Irina. "It's all been decided for us anyway."