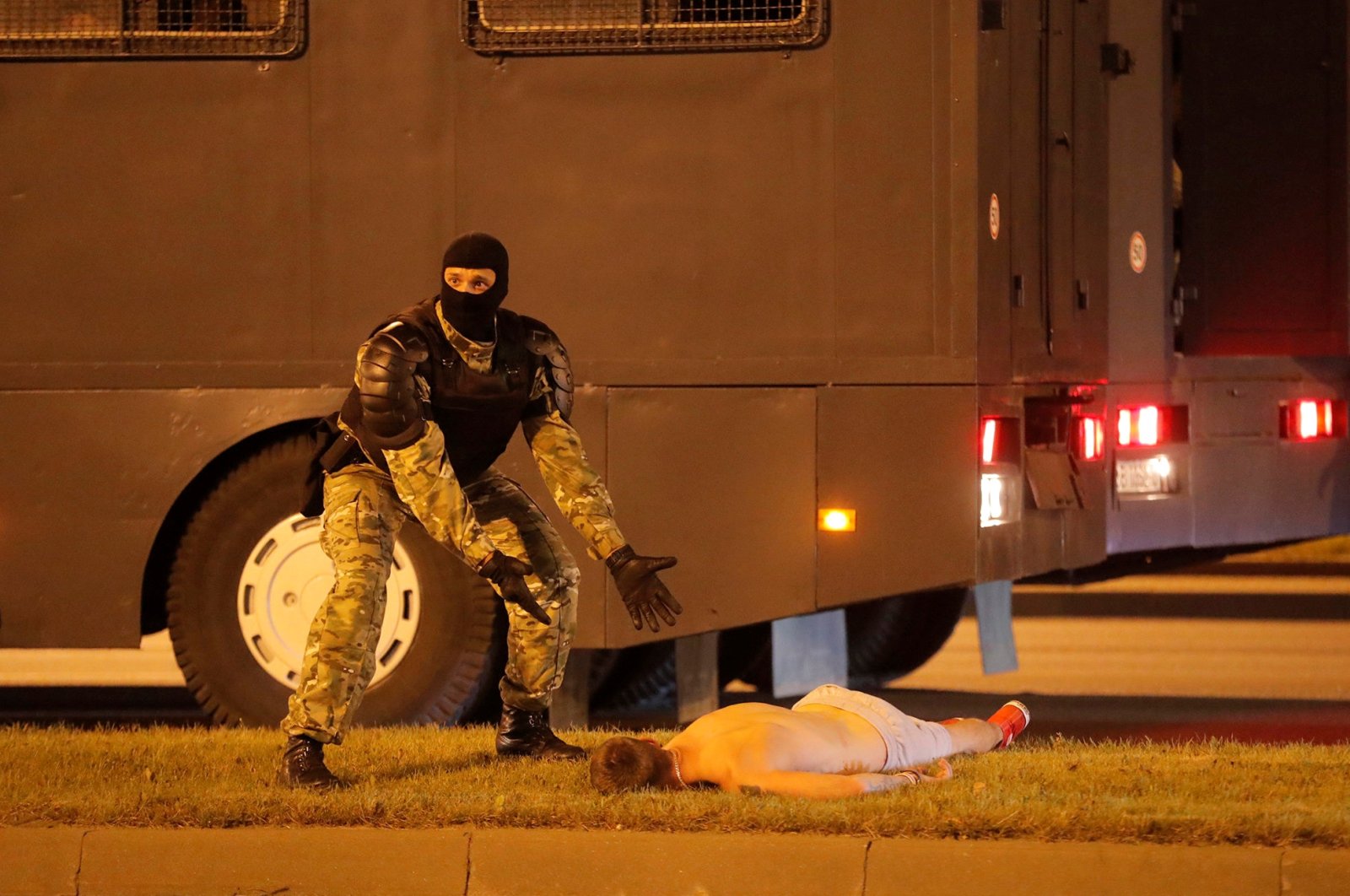 A Belarusian law enforcement officer gestures next to an injured protester, who lies on the ground during clashes after presidential election polls closed in Minsk, Belarus, Aug. 9, 2020. (Reuters Photo)
by Agencies Aug 10, 2020 9:10 pm
RECOMMENDED

Several Western countries on Monday urged Belarus to exercise restraint after a police crackdown on protests following a presidential election in the post-Soviet republic.

Election officials said Monday that President Alexander Lukashenko won a sixth term in office with 80% of the vote, while opposition challenger Sviatlana Tsikhanouskaya got 10%. Tsikhanouskaya dismissed the official results as a sham and demanded a recount. Dozens were injured and thousands detained hours after Sunday's vote when police brutally broke up mostly young protesters with tear gas, water cannons and flash-bang grenades and beat them with truncheons.

The White House said it was "deeply concerned" by the presidential election in Belarus and urged authorities to allow protests.

U.S. President Donald Trump's press secretary Kayleigh McEnany said that "intimidation of opposition candidates and the detention of peaceful protesters" were among numerous factors that "marred the process."

"We urge the Belarusian government to respect the right to peaceably assemble and refrain from the use of force," she told reporters. Meanwhile, France urged "the greatest restraint."

"We watch with concern the violence against Belarusian citizens who demonstrated after the closing of polling stations and call for the greatest restraint," the French Foreign Ministry said in a statement.

Canada's Foreign Minister Francois-Philippe Champagne said his country was "deeply concerned" by the police crackdown and wanted the Belarusian government to show restraint.

In a statement, Champagne said actions by the authorities had "further eroded the democratic legitimacy of the vote" and called for the results of Sunday's election "to reflect the will of the people."

The European Union condemned the police crackdown and called for an immediate release of all those detained.

In a joint statement, EU foreign policy chief Josep Borrell and the EU commissioner responsible for relations with Europe’s close neighbors, Oliver Varhelyi, lamented that “the election night was marred with disproportionate and unacceptable state violence against peaceful protesters.”

“The Belarusian authorities must ensure that the fundamental right of peaceful assembly is respected,” they said.

Lukashenko warned Monday that the protesters who challenge the official vote results extending his 26-year rule will face a tough crackdown, deriding the opposition as “sheep” manipulated by foreign masters.

Lukashenko, whose iron-fisted rule since 1994 has fueled growing discontent in the ex-Soviet nation of 9.5 million, warned that he wouldn’t hesitate to use force again to disperse the opposition demonstrations. He argued that the protesters met a due response overnight after injuring 25 police officers and attempting to take control of official buildings in several Belarusian cities.

“We will not allow them to tear the country apart," he said.

The 65-year-old former state farm director asserted that the opposition was being directed from Poland and the Czech Republic, adding that some groups in Ukraine and Russia could also have been behind the protests.

“They are directing the (opposition) headquarters where those sheep don't understand what they want from them,” he said in a dismissive reference to Tsikhanouskaya and her campaign.

The Interior Ministry said 89 people were injured during the protests, including 39 law enforcement officers, and about 3,000 people were detained, some 1,000 of them in Minsk.