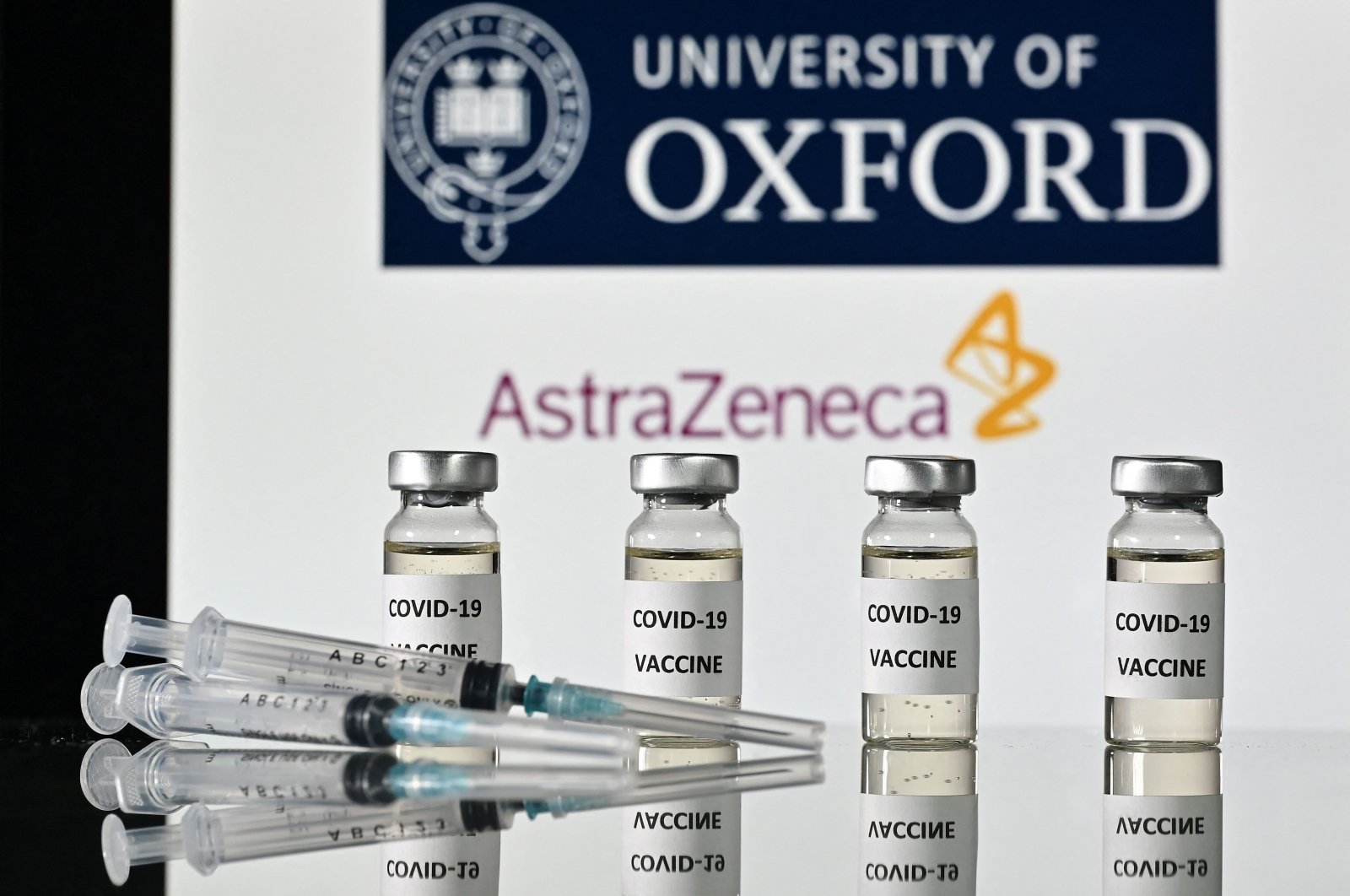 An illustration of vials and syringes in front of the logo of the University of Oxford and its partner British pharmaceutical company AstraZeneca, on Nov. 17, 2020. (AFP Photo)
by French Press Agency - AFP Mar 17, 2021 4:57 pm
RECOMMENDED

The World Health Organization (WHO) said Wednesday that its experts are still reviewing data on the safety of the AstraZeneca COVID-19 vaccine due to concerns about blood clots, but recommended that vaccination programs continue.

"The WHO Global Advisory Committee on Vaccine Safety is carefully assessing the latest available safety data," the U.N. health agency said in a statement. "At this time, WHO considers that the benefits of the AstraZeneca vaccine outweigh its risks and recommends that vaccinations continue."

Meanwhile, after a number of European countries halted their rollout of the jab over safety fears British Prime Minister Boris Johnson said on Wednesday he will receive the AstraZeneca vaccine, downplaying risks.

Johnson dismissed questions in parliament about why several countries had suspended use of the product developed by the British-Swedish pharmaceutical company with scientists at Oxford University.

But he told lawmakers: "I finally got news and I've got to have my own jab, very shortly, I'm pleased to discover."

"It will certainly be Oxford AstraZeneca, that I will be having," said Johnson, who is 56, and among the next category of people being called for vaccination.

The government hopes to have offered it to all adults by July. Britain is also using a jab developed by Pfizer-BioNTech in its vaccination campaign but recipients do not normally get a choice. Johnson wrote in the Times newspaper the "vaccine is safe and works extremely well."

His latest comments join a chorus of support for the AstraZeneca shot from Britain's political and royal establishment.

European countries including France, Spain and Germany are among those who have halted using the jab pending a review by the European Medicines Agency (EMA). But Queen Elizabeth II's oldest son and heir, Prince Charles, on Wednesday criticized opposition to coronavirus vaccines, saying fear was unfounded.

"Who would have thought, for instance, that in the 21st century that there would be a significant lobby opposing vaccination, given its track record in eradicating so many terrible diseases," he said in an article in the Future Healthcare Journal.

Charles, who has been vocal in advocating the rollout of the vaccine among more reluctant minority communities in Britain, added the jab had the "potential to protect and liberate some of the most vulnerable in our society from coronavirus."

The 72-year-old Prince of Wales tested positive for COVID-19 last year and suffered mild symptoms. He had his first dose of a vaccine in February. His wife, Camilla, 73, confirmed on Tuesday she had been given the AstraZeneca shot. "You take what you are given," she said as the pair visited a vaccination center at a north London mosque, adding that she had no ill effects.

Professor Jeremy Brown, from the Joint Committee on Vaccination and Immunisation (JCVI) government advisory body said suspension of the jab was "not logical".

"There is the concern that what's happening in Europe might make people in the UK less confident in the AstraZeneca vaccine," he told broadcaster ITV. In a newspaper article published on Wednesday, Health Secretary Matt Hancock said there was "no evidence" that vaccines caused blood clots.

The EMA, WHO and Britain's Medicines and Healthcare products Regulatory Agency have all backed the AstraZeneca jab, he wrote in The Sun.

"The rate of reported cases (of clots) among the people vaccinated is lower than what would be expected to happen naturally in the general population," he wrote.

Britain has given nearly 25 million people a first dose of a COVID-19 vaccine, including 11 million doses of the AstraZeneca jab, after starting a mass inoculation program in December last year. Vaccinations are seen as central to getting Britain out of lockdown and back to normality.

France and Italy have said they will "promptly restart" administering the jab if the EMA review allows it. As Britain has surged ahead with its vaccination program, European countries have been accused of playing politics to distract from their sluggish inoculation rollouts.

European leaders were angered in January after AstraZeneca announced it was unable to deliver the agreed numbers of jabs to the bloc.