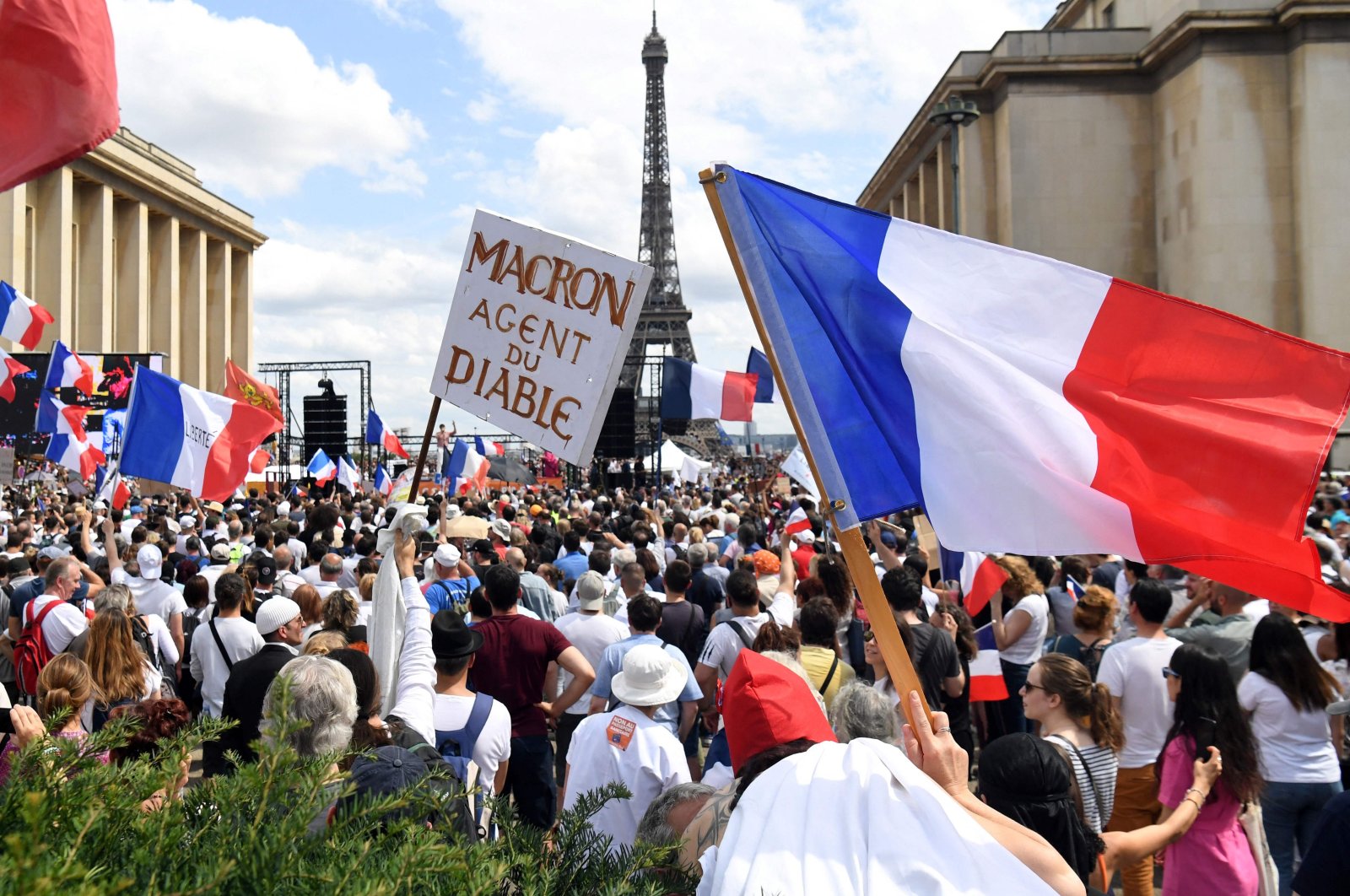 Protesters hold flags and placards during a protest against the compulsory vaccination for certain workers and the mandatory use of the health pass called for by the French government, on the "Droits de l'homme" (human rights) esplanade at the Trocadero Square, Paris, France, July 24, 2021. (AFP Photo)
by ASSOCIATED PRESS Jul 24, 2021 6:45 pm
RECOMMENDED

Members of France’s yellow vest movement and far-right activists gathered Saturday to protest against a bill requiring everyone to have a special "health pass" to enter restaurants and other venues and mandating COVID-19 vaccinations for all health care workers.

Legislators in France’s Senate were debating the bill Saturday after the lower house of parliament approved it Friday. As virus infections are spiking and hospitalizations are rising anew, the French government is trying to speed up vaccinations to protect vulnerable populations and hospitals and to avoid new lockdowns.

Most French adults are fully vaccinated and polls indicate a majority of French people support the new measures. But not everyone.

Protesters chanting "Liberty! Liberty!” gathered at Bastille plaza and marched through eastern Paris in one of several demonstrations Saturday around France. Thousands also joined a gathering across the Seine River from the Eiffel Tower organized by a former top official in Marine Le Pen's anti-immigration party.

While most protesters were calm, tensions erupted on the margins of the Bastille march. Riot police sprayed tear gas on marchers after someone threw a chair at an officer. Other projectiles could also be seen in a video of the incident.

Many marchers focused their anger on a French "health pass” that is required to enter museums, movie theaters and tourist sites. The bill under debate would expand the pass requirement to all restaurants and bars in France and some other venues. To get the pass, people need to be fully vaccinated, have a recent negative test or have proof they recently recovered from the virus.

Lawmakers have debated the measure amid divisions over how far to go in imposing health passes or mandatory vaccinations.

Last weekend, more than 100,000 people protested around France against the measures. They included far-right politicians and activists as well as others angry at President Emmanuel Macron for various reasons.

Remaining members of France’s yellow vest movement, largely from political extremes, are using the virus bill to try to rekindle its flame. The movement started in 2018 as a broad uprising against perceived economic injustice and led to months of protests marked by violence between demonstrators and police, but subsided after the French government addressed many of the protesters’ concerns.