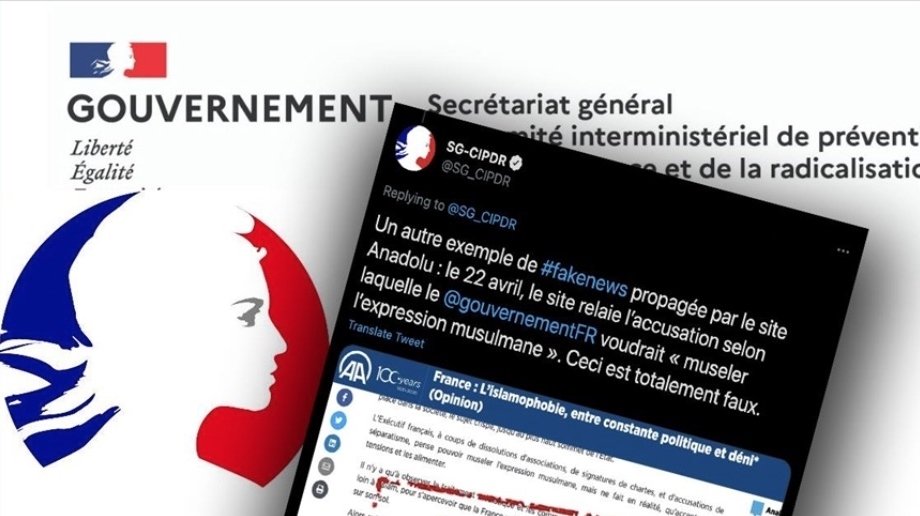 France's Interministerial Committee for the Prevention of Crime and Radicalization (CIPDR) claims that AA is a "propaganda body" and "attacking France in a deceptive and slanderous manner" in its opinion pieces, targeting the agency for covering Islamophobia, April 27, 2021. (AA)
by Anadolu Agency Apr 28, 2021 3:09 pm
RECOMMENDED

France's public institutions continue to target Anadolu Agency (AA), Turkey's state-run news agency, which recently exposed the country's pressure on Muslims and Turks to the international community with its news and commentary as part of freedom of the press.

The French government has taken steps that will complicate the daily lives of Muslims and provide a legal basis for anti-Islamism, especially in recent months through a draft bill to fight "Islamist separatism" and operations carried out in the name of the fight against terrorism.

Reporting on these developments in France both by meeting with the victims and through the concrete steps taken by the relevant institutions, the agency was targeted by the Paris administration, which defends freedom of expression on every platform.

Recently, in a statement on its social media account, France's Interministerial Committee for the Prevention of Crime and Radicalization (CIPDR) claimed that AA is a "propaganda body" and "attacking France in a deceptive and slanderous manner" in its opinion pieces.

However, contrary to what the CIPDR claims, the agency, as an international news agency, informs the international public as part of freedom of expression based on the principle of objective broadcasting.

Additionally, the opinions expressed in the agency's news and publications, especially regarding France's practices in question, are also emphasized by French academics, journalists and experts.

France's discriminative policies against Muslims are also often shared in the international press. The New York Times published a story critical of French police holding four 10-year-old children in custody for more than 11 hours in Albertville, France, on false allegations of "apology of terrorism."

The CIPDR is affiliated with the minister delegate in charge of citizenship, attached to France's Interior Ministry.

In a statement on these allegations, Serdar Karagöz, the agency's chairperson of the board and director-general, said the agency continues to report on the attacks faced by the Muslim and Turkish community in France to its subscribers in 13 languages within the framework of objective broadcasting policy.

The "separatist" bill in the process of being approved by France's National Assembly and the practices carried out in the name of fighting against terrorism have been closely followed not only by the agency but also by the entire international press. Besides, these practices have been the subject of criticism and news review, Karagöz underlined.

"In this respect, AA has fulfilled its duty of informing the public properly," he said, adding that as in every media organization, the agency has a platform under the title of "opinion," which allows the author to comment freely.

In the news, the agency gives both parties a voice, he noted, adding that by conveying France's statements and announcements for its readers, the latest decisions are always presented to them.

"In our news articles, the views of all parties are always presented within the framework of the principles of journalism. Even though France may not like developments and views, universal journalism prioritizes public good and seeks public interest.

"It is unacceptable that France's public broadcasters, who accuse Turkey of violating the freedom of the press at all times and on every platform, question the journalism of AA, which serves the public's freedom of information," Karagöz said.

"I condemn the CIPDR's claims and the broadcasts of French public channel France 5 targeting the agency.

In the documentary by journalist Caroline Roux, "Erdoğan: The Sultan Who Defies Europe," which was aired in March on France 5, it was claimed that AA "produced fake news about France" and that "everything was done to show France as Islamophobic."

In its statements, the CIPDR had also targeted Marwan Mohammed, the former director-general of the anti-racist group Collective Against Islamophobia in France (CCIF), which was previously dissolved by the government.

The bill is being criticized because it targets the Muslim community and imposes restrictions on almost every aspect of their lives.

It provides for intervening in mosques and the associations responsible for their administration as well as controlling the finances of associations and nongovernmental organizations belonging to Muslims.

It also restricts the education choices of the Muslim community by preventing families from giving children a home education.

The bill also prohibits patients from choosing doctors based on gender for religious or other reasons and makes "secularist education" compulsory for all public officials.