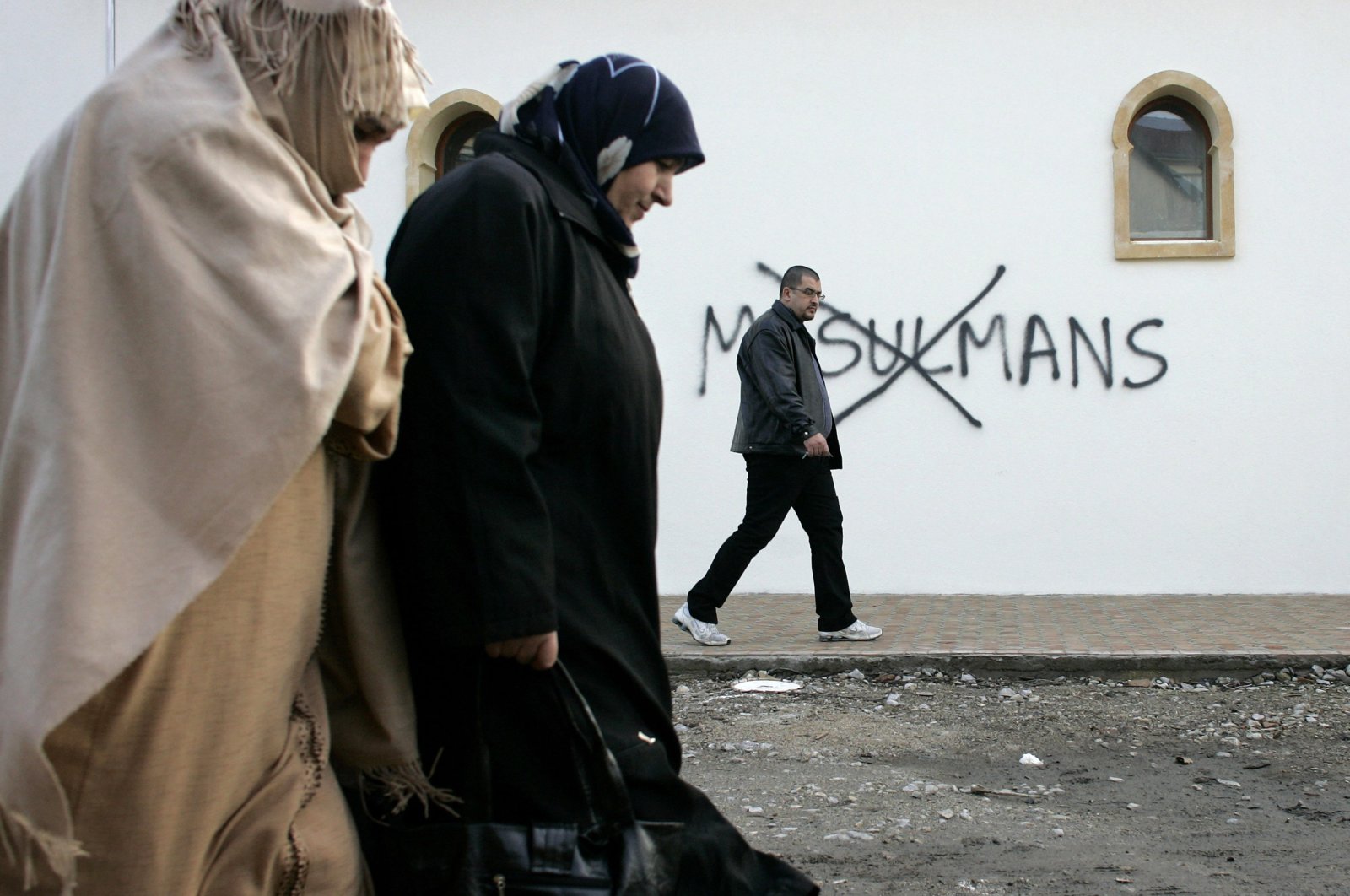 Muslim residents walk past racial slurs painted on the walls of a mosque in the town of Saint-Etienne, central France, Feb. 8, 2010. (AP Photo)
by Daily Sabah with AFP Dec 28, 2021 1:30 pm
RECOMMENDED

$106M funneled to Islamophobic groups in US: CAIR report

France has ordered the closure of another mosque in the north of the country as part of Paris’ crackdown on its Muslim population with the pretext of “fighting against extremism.”

The mosque in Beauvais, a town of 50,000 people some 100 kilometers (62 miles) north of Paris, will remain shut for six months, according to the prefecture of the Oise region where Beauvais is located.

Agence France-Presse (AFP) reported by citing regional authorities Tuesday that the radical nature of its imam's preaching and the sermons that incited hatred, violence and "extremism" were the reason for the closure.

The move comes two weeks after Interior Minister Gerald Darmanin said he had triggered the procedure to close the site because the imam there "is targeting Christians, homosexuals and Jews" in his sermons. This, the minister said, was "unacceptable."

Local authorities were legally bound to launch a 10-day period of information-gathering before taking action but told AFP on Tuesday that the mosque would now be shut within two days.

Local daily Courrier Picard reported this month that the mosque's imam was a recent convert to Islam.

The paper quoted a lawyer for the association managing the mosque as saying that his remarks had been "taken out of context" and said that the imam had been suspended from his duties following the prefecture's letter.

In January, a special commission in the French National Assembly approved the "charter of republican values" of Islam that was introduced last year by President Emmanuel Macron as part of the fight against "separatism." The bill was announced on Oct. 2, 2020, by the president, who claimed that the law was needed to fight so-called Islamic "separatism," prompting criticism and rejection from the Muslim community.

The draft law is being criticized because it targets the Muslim community and imposes restrictions on almost every aspect of their lives. It provides for intervening in mosques and the associations responsible for the administration of mosques, as well as controlling the finances of associations and nongovernmental organizations (NGOs) belonging to Muslims.

$106M funneled to Islamophobic groups in US: CAIR report