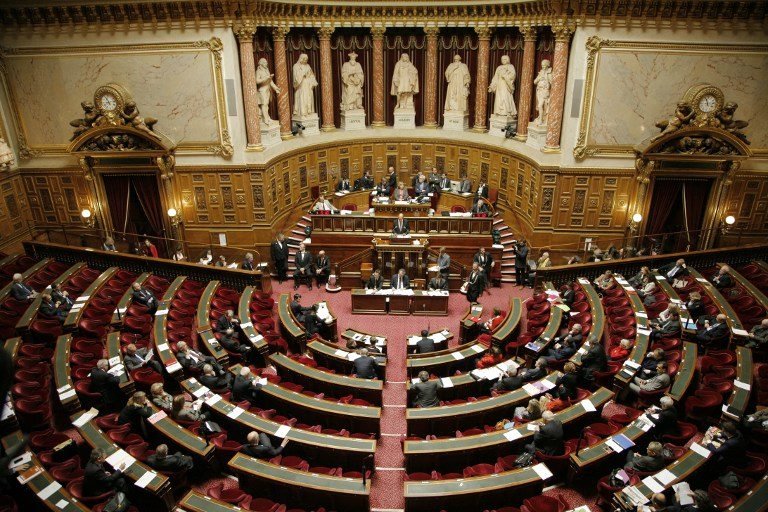 French President Emmanuel Macron's so-called 'anti-separatism' bill is widely seen as a blatant attack on freedom of association and while the country's conservative-led Senate is expected to approve the legislation, critics say that the law will legalize Islamophobia

A bill debated this week in the French Senate, which the government says is aimed at strengthening the country and eradicating extremism, has unwittingly showed how divided France is.

While proponents of the controversial "anti-separatism" bill pushed by French President Emmanuel Macron's government say it simply intends to strengthen the nation's "republican values," namely freedom, equality and fraternity, many others see the law as a populist movement, directed at pandering to right-wing voters.

Macron, who faced threats from the far-right ahead of next year's presidential elections, used the law to thwart divisive rhetoric. He persuaded the leaders of the French Council of the Muslim Faith to develop a charter of principles that uphold the country's secular values and lay the foundation for this action. Other experts say they are concerned about the ramifications of the legislation.

A legal scholar at Toulouse Capitole University, Rim-Sarah Alouane, described the bill as an “attack” on civil liberties, pointing out provisions that she said would allow the government to violate fundamental human rights.

“I see a blatant attack on freedom of association. This bill has no safeguards of potential abuse from public authorities,” she told NBC News.

The bill will be debated in the Senate on March 30. It is expected to return to the National Assembly after a vote is held.

The debate in the French Senate comes after the French lower house National Assembly, which is dominated by Macron's centrist La République En Marche (LREM), approved the bill aimed at "fighting extremism" that the government sees as a riposte to "religious groups attempting to undermine France's secular traditions." Macron's LREM rallied around the legislation on Feb.16, with 347 National Assembly lawmakers voting in favor, 151 against and 65 abstaining.

Macron's government says the bill will contain what the president has called "Islamist separatism" and will highlight the country's secular system. However, critics say the law violates religious freedom and unfairly targets France's 5.7 million Muslim minority, the largest in Europe. Although, the law does not specifically mention the word "Islam," French Muslims have protested against it for months, claiming the measures set them apart.

A Paris correspondent of Anadolu Agency (AA) said Monday in a video seminar held by Ankara-based Migration Research Foundation, an organization that conducts and publishes research mainly on migration and the diaspora, that France's proposed law will legalize Islamophobia. As a Parisian and journalist, Yusuf Özcan noted that the bill targets Muslims in France and would alienate them by restricting their rights and interfering with their beliefs.

If the bill is accepted by the Senate, the French government would ban homeschooling for Muslims, make formal education obligatory and would be able to close associations, schools and mosques if a suspicious incident occurred.

Özcan went on to say that a number of parliament members abstained from voting as they found the draft law "insufficient,” expecting it to involve harsher interventions such as a ban on wearing headscarves across the country.

Emphasizing that the increase in the number of Muslims was regarded as a threat and a source of worry by far-right politicians, he added that when a Muslim person's visibility increased in social, cultural and political life, their chances of being regarded as a terrorist increased in France.

Alouane also highlighted such tendency, saying that Macron’s focus on "Islamic radicalization" has reinforced negative religious stereotypes, dividing French Muslims over the bill and their relationship with their nation.

“In France, a good Muslim is an invisible Muslim,” Alouane said.

Comments from some senior ministers also sparked the debate. French Interior Minister Gerald Darmanin said he was "shocked" that supermarkets have aisles dedicated to halal and kosher foods.

A legal expert from France, Osman Han, said the proposed law mainly targeted Muslim schools whose numbers had recently increased in the country.

"A law should be necessary and proportionate. But there are determinations made by administrative authorities and advisory boards in France that this draft bill is not necessary or proportionate," Han said, adding that the lawmakers meant to shut down Muslim schools and make formal education compulsory for children 3 years old and above.

"The French Ombudsman Institution states that this bill does not meet the aim of strengthening respect for the principles of the republic," he said.

The bill provides for intervening in mosques and the associations responsible for their administration as well as controlling the finances of associations and nongovernmental organizations belonging to Muslims. It also prohibits patients from choosing doctors based on gender for religious or other reasons and makes "secularism education" compulsory for all public officials. Opponents say the law violates religious freedom and unfairly targets France's 5.7 million Muslim minority, the largest in Europe.

Human rights group Amnesty International said Monday that new regulations "would be a serious attack on rights and freedoms in France."

“Time and again we have seen the French authorities use the vague and ill-defined concept of ‘radicalization’ or ‘radical Islam’ to justify the imposition of measures without valid grounds, which risks leading to discrimination in its application against Muslims and other minority groups,” Amnesty International’s Europe researcher Marco Perolini said, adding that “this stigmatization must end.”

Amnesty said that in its current state, some aspects of the bill raise concerns about the protection of freedom of association and expression, as well as the principle of non-discrimination in France. According to the rights group, several of the 50 articles are problematic. Amnesty highlighted Article 6, which asserts that any organization that applies for a grant from the State or a local authority must sign a contract of “republican commitment." Another article that Amnesty says will bring controversy is Article 8, which will delegate to the authorities additional powers to dissolve organizations.

“It would allow public authorities to fund only organizations that sign a ‘contract of republican commitment’ – a vaguely defined concept which is wide open to abuse and threatens the very freedoms of expression and association the French authorities claim to stand for,” said Perolini, speaking about Article 6.

The legislation was discussed in an extremely tense atmosphere after three attacks late last year. One of them was the deadly attack on Oct. 16 on teacher Samuel Pati, who showed his students cartoons of the Prophet Muhammad during a lesson on free speech.