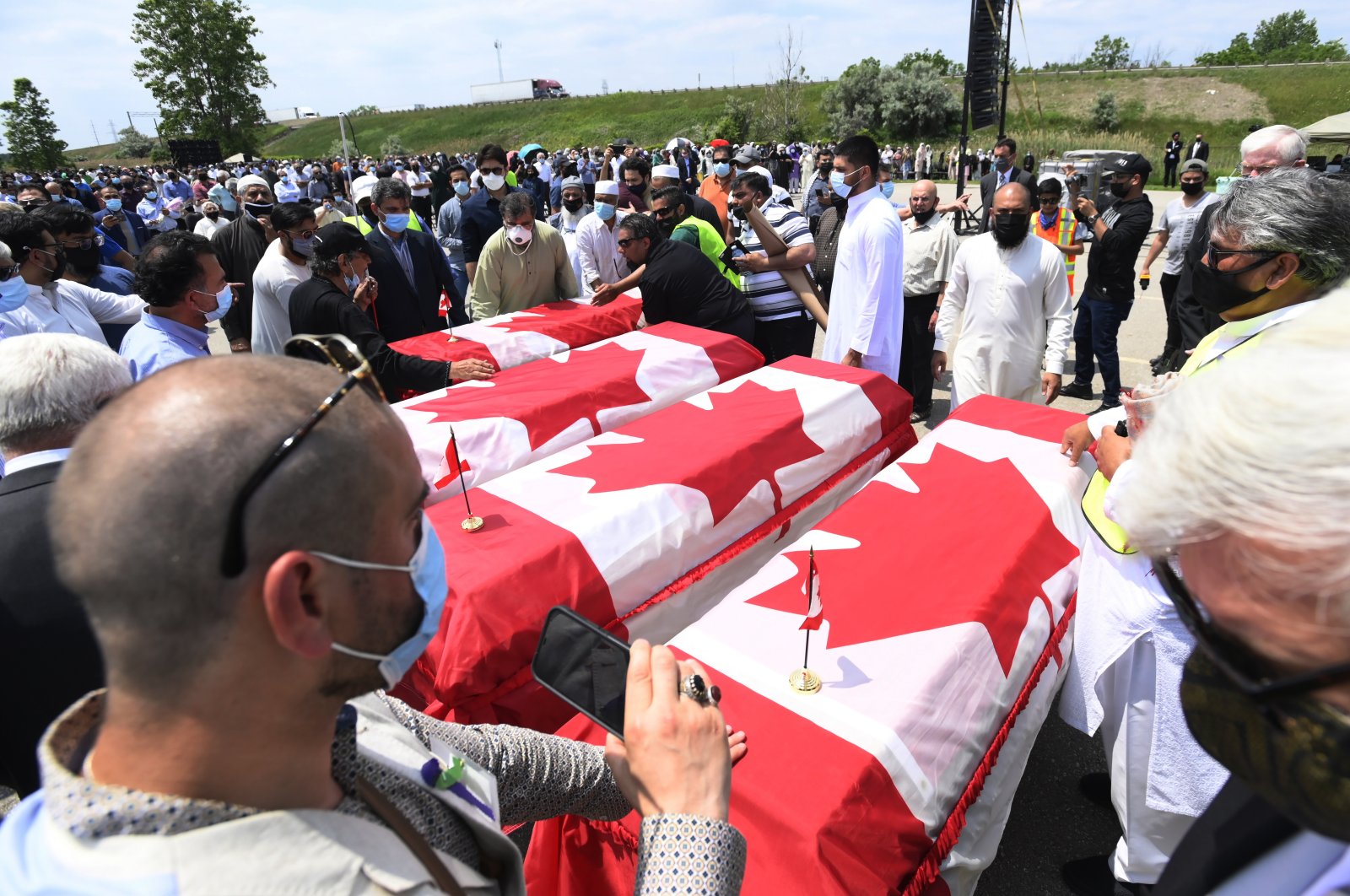 Caskets draped in Canadian flags arrive at a funeral for the four Muslim family members killed in a deadly vehicle attack, at the Islamic Centre of Southwest Ontario in London, Ont., on Saturday, June 12, 2021. (AP File Photo)
by Anadolu Agency Sep 10, 2021 7:37 pm
RECOMMENDED

Muslims living in Canada have been increasingly facing anti-Muslim sentiments since the 9/11 attacks carried out two decades ago across the border in the U.S., a report by the National Council of Canadian Muslims (NCCM) said Friday.

"It's become systemic since then," said Fatema Abdalla, communications coordinator for the NCCM, told Global News. "And what we're seeing now is that not only is it growing, but it's also evolving."

More recently in London, Ontario, a man spurred by hate slammed into a Muslim family with his truck, killing four and leaving the lone survivor, a nine-year-old boy, an orphan.

"Those kinds of attacks, this hatred of Muslims, it has been a constant feature of Canadian political life in the period since 9/11," University of British Columbia professor Sunera Thobani, a Muslim, told Global.

The hate increased in the years immediately following the World Trade Center attack and has slowly grown since, with Statistics Canada reporting that anti-Muslim attacks numbered 99 in 2014, up from 36 in 2009.

Also in 2015, former Conservative Party leader and Prime Minister Stephen Harper wanted to form a "barbaric cultural practices hotline" where Canadians could call to report disturbing rituals their neighbors were involved with. The idea, which many considered stemmed from anti-Muslim sentiment, died when Justin Trudeau won the election the same year. But Islamophobia survived.

Then Quebec instituted a law banning religious symbols from being worn by public servants, such as teachers, nurses and police, in the workplace. Critics said that regulation unfairly targeted Muslim women who wear a hijab. A challenge to the law has been launched in the courts.

"The prevailing narrative of all this sentiment was this vast conspiracy, that Muslims were trying to infiltrate and take over the West and commit a white genocide, or at least change the culture," said Evan Balgord, executive director of the Canadian Anti-Hate Network.

Spurred by the horrific attack in London, Ontario, in June, a summit on Islamophobia was called July 22 by Trudeau and it offered a chance for "Muslim communities to identify concrete ways to combat Islamophobia across the country," according to a statement from the Government of Canada.

One of the recommendations put forth by the NCCM was a "federal Anti-Islamophobia Strategy by year-end."

"The reality is we cannot just keep adding onto a list of horrifying things that have happened," NCCM head Mustafa Farooq said in a story with Anadolu Agency (AA) in July. "For our community, this is about survival."