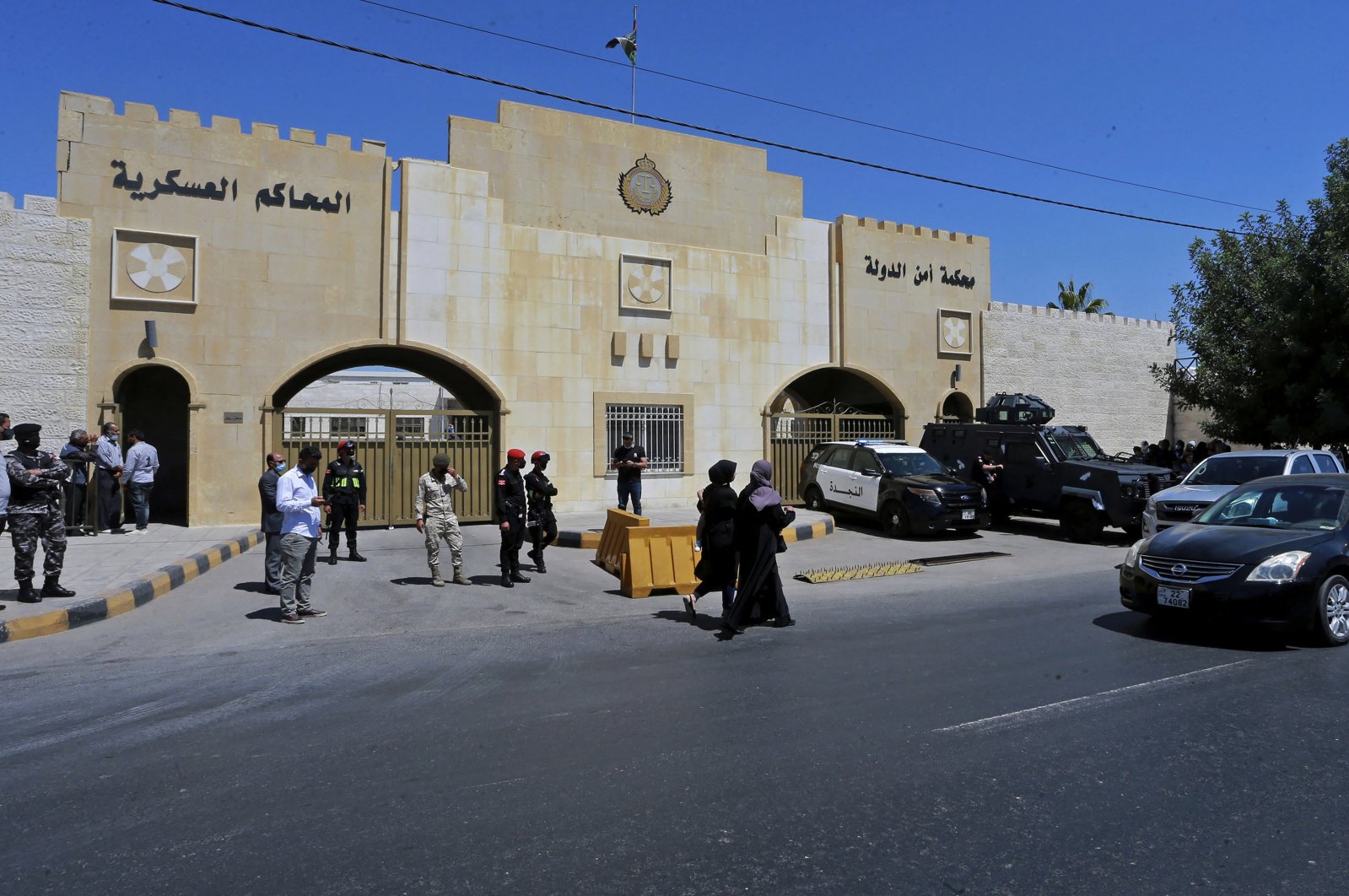 Security forces stand outside the state security court where the trial of Bassem Awadallah, a former royal adviser, and Sharif Hassan bin Zaid, a distant cousin of the king, is taking place, in Amman, Jordan, June 21, 2021. (AP Photo)
by ASSOCIATED PRESS Jul 12, 2021 11:32 am
RECOMMENDED

A Jordanian state security court has sentenced two former officials to serve 15 years in prison over an alleged plot against the Western-allied monarchy that involved the half-brother of King Abdullah II.

Bassem Awadallah, who has U.S. citizenship and once served as a top aide to King Abdullah II, and Sharif Hassan bin Zaid, a member of the royal family, were found guilty of sedition and incitement charges. They are alleged to have conspired with Prince Hamzah, the king’s half-brother, and to have sought foreign assistance.

Lt. Col. Muwafaq al-Masaeed, a military judge, announced the verdict on Monday, following a closed-door trial that consisted of just six hearings. The two were sentenced to 15 years for each of two felonies, but the judge said only one sentence would be imposed on them.

The two were arrested in April over an alleged plot against the kingdom involving Prince Hamzah, the king's half-brother and a former crown prince. The royal family says it resolved the dispute with Hamzah, whose exact status is unknown but who was never formally charged.

Awadallah's U.S. lawyer says his client alleged he was tortured in Jordanian detention and fears for his life. The three Jordanians were accused of fomenting unrest against the monarch while soliciting foreign help.

Hamzah denied the allegations in video statements released in April after he was placed under house arrest, saying he was being silenced for speaking out against corruption and poor governance by the ruling system. Both defendants had pleaded not guilty.

Abdullah is expected in Washington on July 19, when he will be the first Arab leader to meet with U.S. President Joe Biden at the White House. Jordan is a close U.S. ally in the Middle East and is seen as a key partner in eventually reviving the Israeli-Palestinian peace process.

Michael Sullivan, a former federal prosecutor hired by Awadallah's U.S.-based family, told The Associated Press (AP) that the closed-door trial, which consisted of just six hearings, "has been completely unfair."

Awadallah says he was beaten, subjected to electrical shock and was threatened with future mistreatment "if he didn’t confess," Sullivan said. The court denied requests by Jordanian defense lawyers to call witnesses, and prosecutors only shared purported transcripts, but not audio, from surveillance of the alleged plotters.

The prosecutor’s office at the state security court denied that the trial was unfair, saying Awadallah was given due process in line with Jordanian law and was not mistreated in any way. It said Awadallah only raised the torture allegations as the verdict neared.

Sullivan, a former U.S. attorney for Massachusetts and former acting director of the federal Bureau of Alcohol, Tobacco, Firearms and Explosives, said that based on the way the trial was conducted, a guilty verdict appeared to be a foregone conclusion. He said any conviction would be appealed.

Awadallah, who also holds Jordanian and Saudi citizenship, served as head of the royal court and government minister in Jordan. He has extensive business interests in the Gulf and has advised Saudi Arabia’s powerful crown prince, Mohammed bin Salman (MBS), on attracting foreign investment. The Awadallah family urged the Biden administration to call for his release.