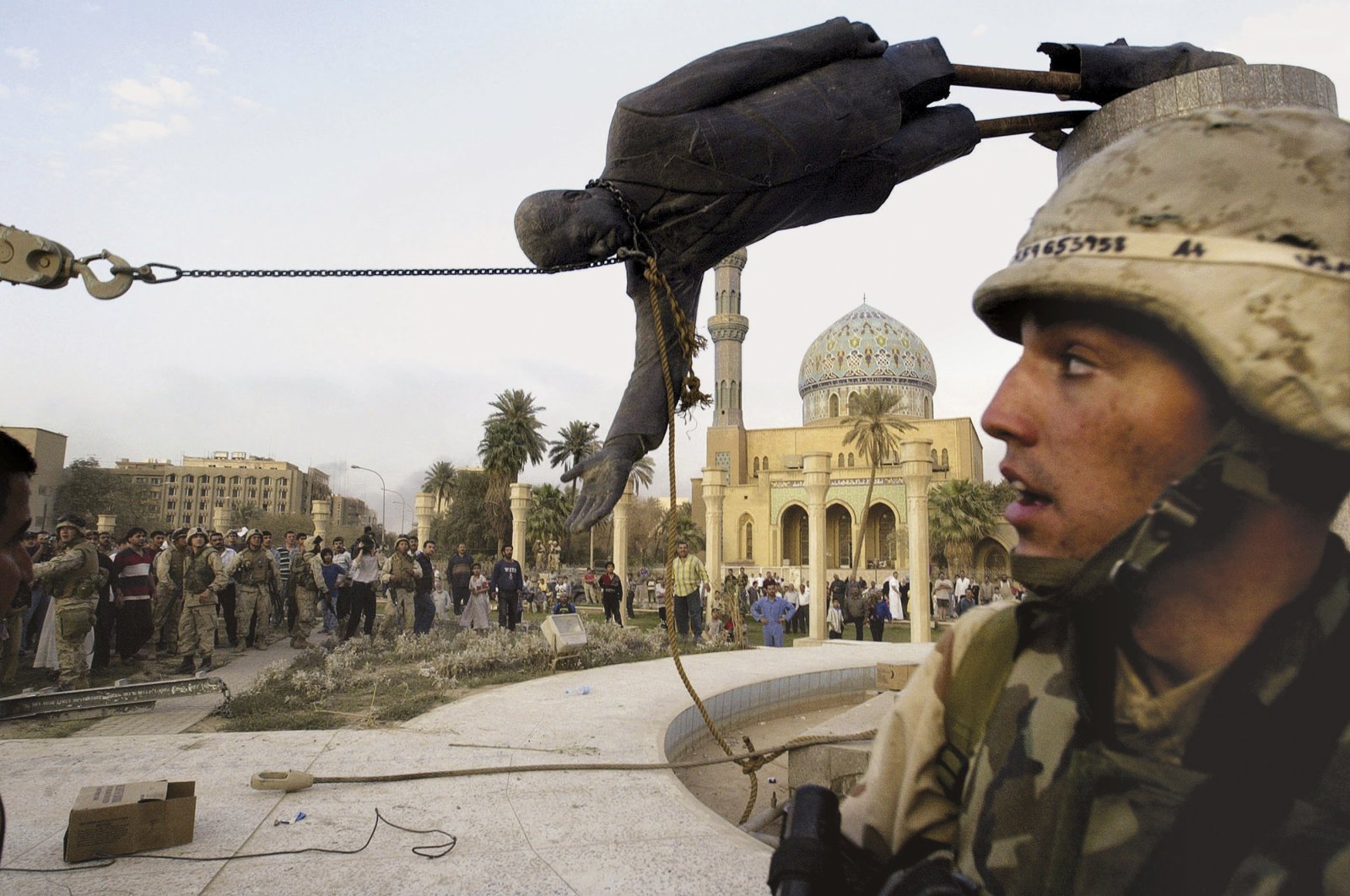 Saturday marked the 20th anniversary of the Sept. 11, 2011 terrorist attacks in the United States, a date which changed many things for millions around the world.

Iraq had nothing to do with 9/11. But the terrorist attacks forever changed the lives of Iraqis, too.

In the aftermath of the attacks, the U.S. invaded Afghanistan, swiftly deposing the Taliban regime that had been sheltering Osama bin Laden, the leader of the al-Qaida terror network blamed for the attacks.

But it was not long before President George W. Bush shifted his attention to Iraq, identifying it, along with Iran and North Korea, as part of an “axis of evil” and asserting that its brutal dictator, Saddam Hussein, was armed with weapons of mass destruction and had ties to al-Qaida. No evidence of either was found.

What followed was a U.S.-led invasion of a country in the heart of the Middle East that spurred a decade of war, with consequences that reverberate across the region to this day.

“At first, I was happy with the U.S. invasion, everyone was happy. We were filled with hope for a better future,” said Mohammed Agha, an Iraqi Kurd who was 27 when the invasion began.

“But then what happened was that the country’s institutions were destroyed and never rebuilt again," he said. "There was no planning for the day after and no nation-building."

Agha’s words reflect the lingering anger and bitterness felt by many Iraqis over what they regard as a lost opportunity to remake their country following the ouster of Saddam, who ruled with an iron grip for almost 30 years.

The invasion reshaped Iraqi politics, including a shift in the country’s power base from minority Arab Sunnis to majority Shiites, with Kurds gaining their own autonomous region. But while many Iraqis welcomed Saddam's ouster and the degree of democracy that followed, they expected the U.S. to bring good governance, security and reliable basic services like electricity.

Failure to achieve any of those things fueled resentment and led to an insurgency that ultimately devolved into civil war, with both Shiite and Sunni militias fighting the Americans for control of the country.

After decades of conflict, Iraq today has a relatively stable government, and the car bombings, suicide attacks and death squads have subsided. But the economy is in tatters, its infrastructure is crumbling and corruption is rampant. The government, with its fractious politics, is unable to control the dozens of powerful Iran-backed militias that wield enormous control.

For some, the loss is also personal.

On the evening of April 7, 2003, two missiles crashed with such a deafening sound and force that they knocked Itimad Hassoun to the floor of her home in Baghdad’s Jadriyah district and blasted her doors off their hinges.

The Americans had been bombing for more than two weeks as part of their “shock and awe” campaign to topple Saddam, and the Iraqi capital was in darkness. Hassoun had been sitting by candlelight with her husband. The next few moments were a blur, as she fumbled blindly, screaming for him and their children.

Her son, two daughters and a granddaughter lay dead in the rubble of their home next door. Only a newborn granddaughter survived.

Twenty years after 9/11, Hassoun is 74 and still dresses in black after losing her son 18 years ago. She says she will never forgive America for killing her loved ones.

“There’s nothing that makes me happy. I have a pain that cannot be removed and an injury that cannot be healed. It’s inside me,” she said, looking frail and tired as she sat in a chair in a large guest room.

Baghdad fell on April 9, two days after the airstrike that killed Hassoun’s family. Many Iraqis cheered as U.S. Marines pulled down a statue of Saddam in the capital’s Firdous Square.

But the euphoria was short-lived, as hope gave way to occupation, as well as more daily death and destruction after the Americans dissolved the Iraqi army. The move led to the rise of al-Qaida and later the Islamic State group in the country.

The following years were stamped with images of horror. Among them: the bodies of four U.S. security contractors hanging from a bridge over the Euphrates River in Fallujah in March 2004; photos cataloging the abuse of Iraqis in the U.S.-run Abu Ghraib prison; the bloody battles between U.S. troops and al-Qaida militants in Fallujah in 2004; the February 2006 attack by extremists that shattered the golden dome of a revered Shiite shrine in Samarra, unleashing sectarian bloodletting.

By the time Washington withdrew its last combat troops in December 2011, tens of thousands of Iraqi civilians were dead, along with 4,487 Americans. U.S. troops were invited back in 2014 after Iraqi security forces collapsed in the face of an onslaught by the Daesh group there and in neighboring Syria. Tens of thousands more Iraqis were killed before the last pockets of those militants were defeated in 2017.

“A dictatorship was removed for a supposed democracy, and we found ourselves with a civil war, al-Qaeda and ISIS (Daesh), with no services and just thieves all around us,” said Assim Salman, Hassoun’s 53-year-old neighbor who helped dig out the bodies of her relatives that fateful night.

'To hell with such democracy'

In his 2010 memoir, “Decision Points,” Bush admitted to mistakes in Iraq, including the decision to disband the Iraqi army, and said he got a “sickening feeling” every time he thought about the failure to find weapons of mass destruction, his main justification for the war. But he stood by his decision to invade.

Political analyst Bassam al-Qazwini said the people of Iraq and Afghanistan paid the price of the U.S. invasions after 9/11, not the quickly collapsing regimes in those countries.

Instead of building democracy in Iraq, he said, the Americans supported a political class that created networks of corruption and militias that continue to rob the country. Even though it is rich in oil, Iraq suffers chronic blackouts and crumbling infrastructure because of graft, profiteering and mismanagement. Tens of thousands of students graduate each year with no hope of finding jobs.

“This corrupt network is capable of killing Iraqis to survive, the same way Saddam killed Iraqis to stay in power. So, what has changed?” al-Qazwini said, citing the crackdown on peaceful anti-government protests in 2019.

Today, Hassoun lives in the same house in Jadriyah, 200 meters (yards) from the Tigris River. Black and white photos of her husband adorn the walls.

Dina, her granddaughter who survived the bombing, is now an 18-year-old student of dentistry.

Hassoun wants the few thousand Americans still in Iraq to leave – “a departure without a return, this time” – because of what they did to her family.

But her neighbor Salman, like many other Iraqis, views the U.S. withdrawal from Afghanistan with concern, worried about a return of militant groups like the Daesh.

“America needs to fix things," he said. “It cannot do to us what it did to Afghanistan, where it fought the Taliban for 20 years and then gave the country back to them.”