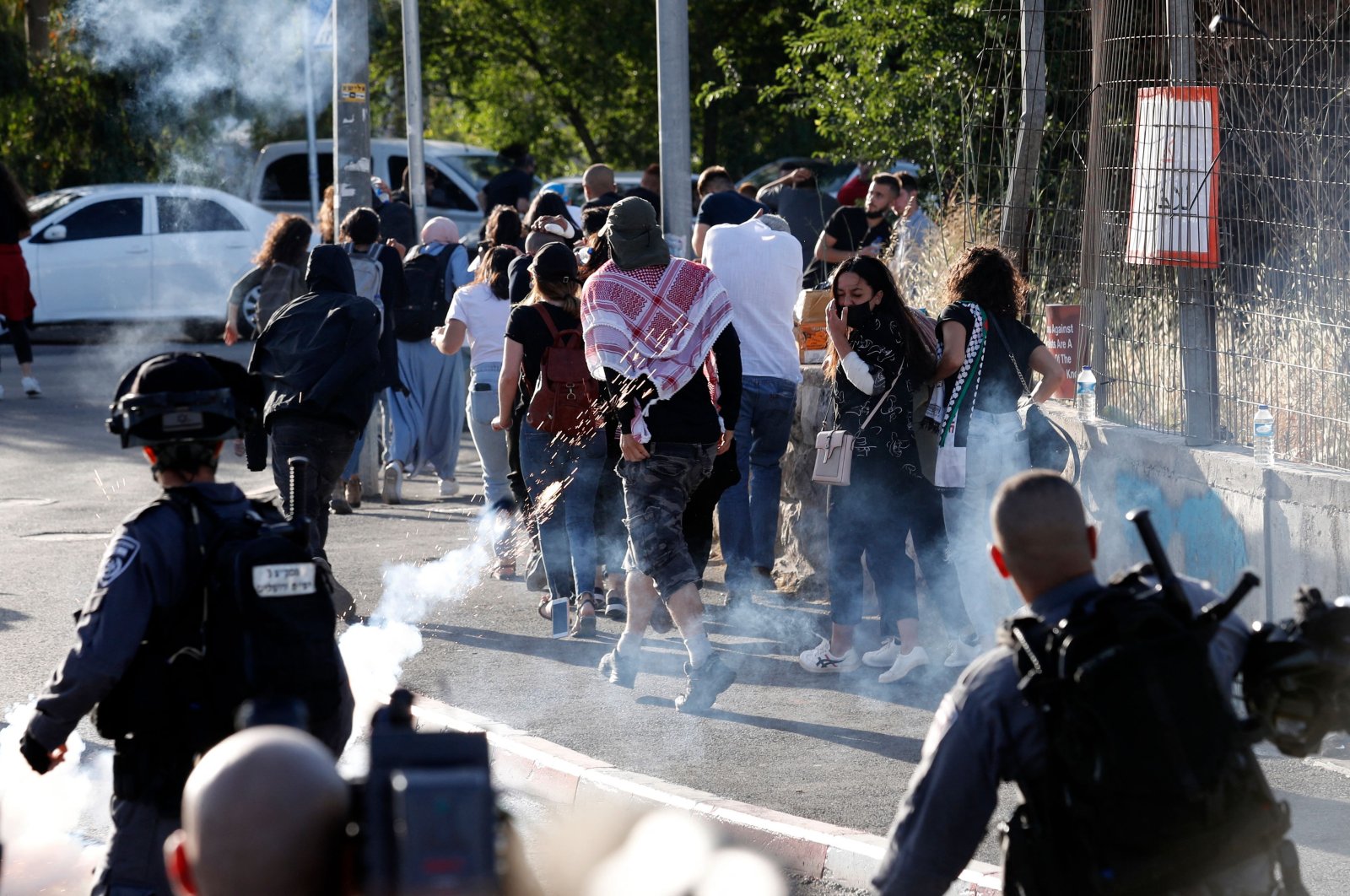 Israeli security forces fire tear gas as Palestinian protesters and activists flee, near an Israeli Police checkpoint at the entrance of the Sheikh Jarrah neighborhood in East Jerusalem, during a rally demanding the reopening of the roadblock, on May 29, 2021. (AFP Photo)
by Daily Sabah
May 31, 2021 3:56 pm

As Facebook grapples with internal allegations of censorship, unequal enforcement and pro-Israel bias, a former Facebook employee revealed the company's systemic policy of censoring Palestinians and solidarity activists following Israeli aggression in the Gaza Strip that killed hundreds of people and wounded thousands of others.

Ashraf Zeitoon, who served as Facebook’s head of policy for the Middle East and North Africa region from 2014 to mid-2017, told VICE News that Instagram and its parent company Facebook are deliberately and systematically silencing Palestinian voices. Zeitoon also pointed out Palestinian companies that saw their direct messages (DM) blocked or their posts removed on Instagram since the unrest in Gaza and Israel began on May 10.

One such incident appeared more than a week ago when Palestinian brand creator Aminah Musa decided to help Palestinian children by launching an Instagram campaign in order to collect food and other highly important supplies for children in Gaza. However, Musa faced one of the biggest challenges an online store could face as direct communication with shoppers and subscribers was suddenly blocked.

“While we were answering direct messages ... a message popped up and said: ‘This feature is unavailable due to the protection of our community,’” said Musa, who is living in Chicago, adding that people were exchanging messages to learn more about the charity campaign launched by Paliroots, Musa's company.

“They were wondering whether we were ignoring them,” she said. “We had to constantly make Instagram stories saying, ‘Hey, we can’t message back on DM.' People were reaching out to us to help them connect their friends and family in Gaza with relief kits through MECA (Paliroots’ partner on the ground). We couldn’t refer them since we weren’t able to message, which left families in Gaza with no guidance.”

“It escalated people’s thinking that the charity project was fake,” Musa added.

The block was imposed on May 15, a symbolic day for Palestinians known as the “Nakba” or The Catastrophe, which refers to the destruction of hundreds of villages in historical Palestine and the expulsion of hundreds of thousands of Palestinians from their land by armed Zionist gangs to make way for the new state of Israel in 1948.

Left without communication, Musa's team was helpless. “We don't know why this happened,” she said. "Before that, we have not removed any of our posts."

Later, Instagram restored Paliroots' access to direct messages, the same day that the Israeli army and Hamas agreed to a cease-fire after 11 days of fighting that killed more than 250 Palestinians in Gaza, including 66 children, and wounded nearly 2,000.

“I can confirm that this is not the first time that Facebook adopts such measures to demote content, which its content policy team believes to be borderline inciteful or unqualified spam – which is not the case in so many of these incidents,” Zeitoon said. He pointed out the Lovindubai digital media site, who saw their Instagram post about luxury fashion chains in Dubai including Harvey Nichols, Bloomingdale’s and Ounass that appear to be pro-Israeli, suddenly removed without warning or explanation.

Other companies have also reported suppression or censorship following the outbreak of unrest in Gaza. The founder of Nominal, a jewelry company in Arizona, told VICE News that sales have been below average since the release of the Palestinian solidarity messages.

“People are not seeing our posts or stories so they don’t get the engagement they typically would,” Akram Abdullah said. “It’s disappointing,” he added. “Instagram is a free platform. People should be able to voice their opinions and thoughts without any kind of repercussions ... If anything, it makes us want to have the conversation more and more.”

Former Facebook employees said that complaints about a significant reduction in reports of bombings in Gaza and Jerusalem may be related to “deliberate throttling reach and hiding hashtags.”

Recently, Facebook admitted that it made a mistake in removing content about the Al-Aqsa Mosque, the site of attacks by Israeli police forces on Palestinians after Instagram linked the site to terrorism.

“We know there have been several issues that have impacted people’s ability to share on our apps, including a technical bug that affected stories around the world, and an error that temporarily restricted content from being viewed on the Al-Aqsa Mosque hashtag page,” the company's spokesperson said. “While these have been fixed, they should never have happened in the first place. We’re so sorry to everyone who felt they couldn’t bring attention to important events, or who felt this was a deliberate suppression of their voice. This was never our intention – nor do we ever want to silence a particular community or point of view.

“Our policies are designed to give everyone a voice while keeping them safe on our apps, and we apply these policies equally, regardless of who is posting or their personal beliefs. We have a dedicated team, which includes Arabic and Hebrew speakers, closely monitoring the situation on the ground, who are focused on making sure we’re removing harmful content while addressing any enforcement errors as quickly as possible.”

In an attempt to draw attention to the violence, Instagram users posted videos with the hashtag #AlAqsa or Al-Aqsa in Arabic #الاقصى or #الأقصى, only to find that their posts were removed or hidden from search results. Several notifications revealed that Facebook-owned Instagram deleted posts because they were associated with "violent or dangerous organizations." When employees learned about the removals and their reasons, some filed internal complaints.

In one case, an employee saw that Instagram removed an infographic describing the situation in Al-Aqsa due to its association with, once again, "violence or a terrorist organization." After the employee filed a complaint, they wrote in an internal message that they were informed that the image was removed “based on a reference to ‘alaqsa’ which is a designated organization,” a Facebook term that refers to “dangerous people and organizations". The content was eventually reinstated after filing a complaint.