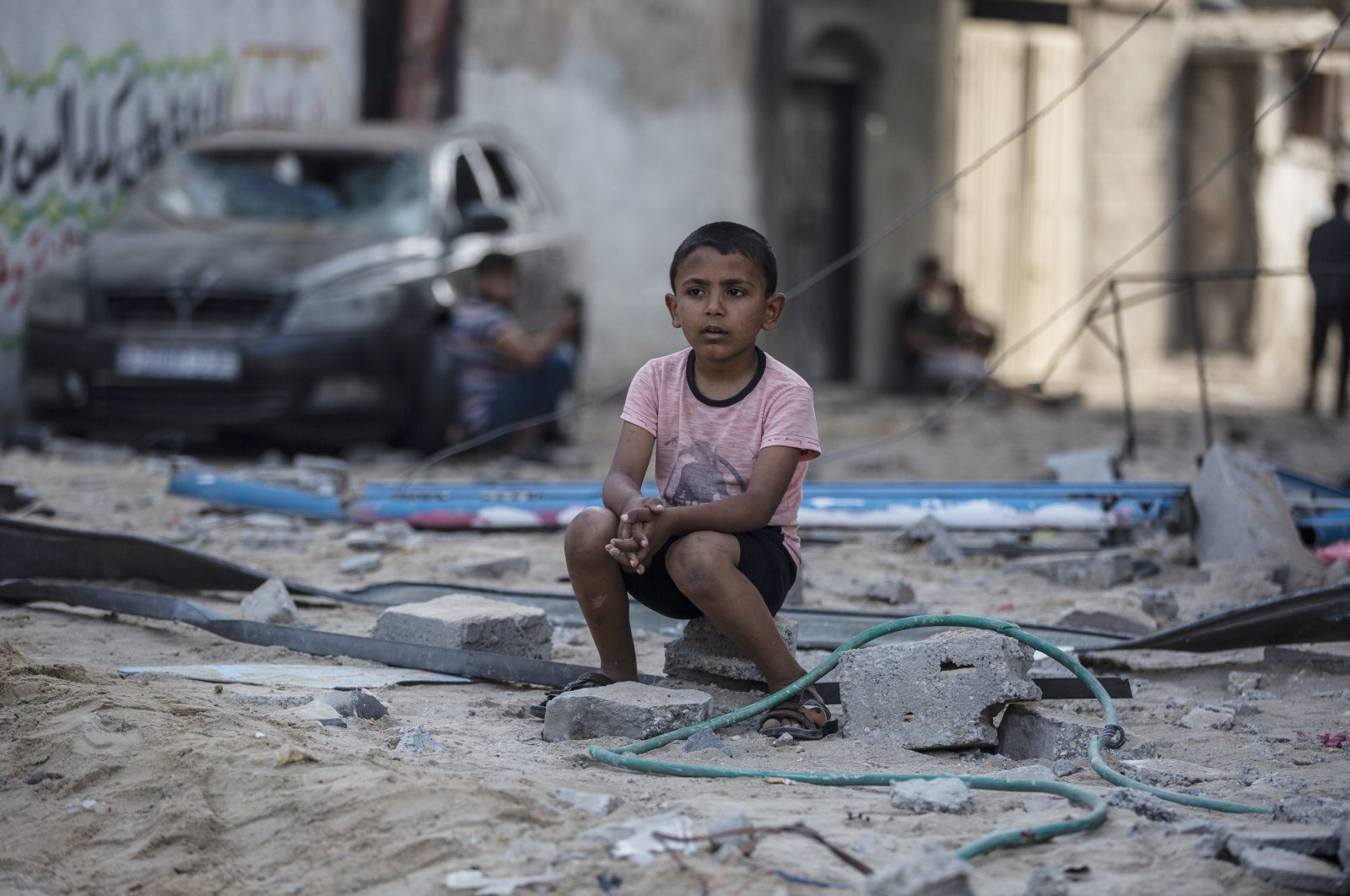 A Palestinian boy sits looking at others inspecting the damage of their shops following Israeli airstrikes on Jabaliya refugee camp, northern Gaza Strip, May 20, 2021. (AP Photo)
by ASSOCIATED PRESS May 21, 2021 9:10 am
RECOMMENDED

A cease-fire in Gaza is “not enough at all” and the issues of Jerusalem's future and achieving an independent Palestinian state must be solved now, top Palestinian diplomat said.

Foreign Minister Riad Al-Malki told reporters Thursday on the sidelines of an emergency meeting of the U.N. General Assembly on the Israeli assault on the Gaza Strip that while a cease-fire is good it doesn’t address “the core issue” that started the violence.

He said that is Jerusalem, citing the “desecration” by Israeli soldiers and settlers of the Al-Aqsa Mosque, Islam’s third holiest site, and the Israeli policy of forcibly removing Palestinians from their homes in the city’s different neighborhoods including Sheikh Jarrah.

Israel occupied east Jerusalem, along with the West Bank and Gaza — territories the Palestinians want for their future state — in the 1967 Mideast war. Israel annexed east Jerusalem in a move not recognized internationally, and views the entire city as its capital. The Palestinians view east Jerusalem — which includes major holy sites for Jews, Christians and Muslims — as their capital, and its fate lies at the heart of the Israeli-Palestinian conflict and has triggered serious violence in the past.

Al-Malki accused Israel of intending to erase the multi-cultural, multi-religious character of the city of Jerusalem saying: “We are opposed to that, we reject that, and we’ll keep working to prevent that from happening.”

Thursday’s assembly meeting began with speeches from a dozen ministers, almost all from Arab and Muslim-majority countries, and is eventually expected to hear over 100 speakers.

He said the overwhelming messages from the meeting was not only “condemning Israeli atrocities and crimes” in Gaza but reminding the world of the need to care for and defend Jerusalem and to work for the establishment of an independent Palestinian state.

“Today’s events here in the General Assembly and what has been happening has refocused the attention again on the issue of Palestine,” Al-Malki said.

He said Israel’s normalization of relations with some Arab countries including the United Arab Emirates and Bahrain, doesn’t waive the questions of the future of Jerusalem and a Palestinian state.

“To the contrary, we see today that the issue of Palestine and the Palestinian question, the issue of Jerusalem and the occupation of Jerusalem, is the most important issue for all Muslims and Arabs and the world alike,” Al-Malki said.

“We want to see the Palestinian people free and also living in their own independent Palestinian state with east Jerusalem as its capital,” he said.

The last direct talks between Israel and Palestine took place in 2014. The Palestinians broke off relations with former U.S. President Donald Trump’s administration in December 2017 after he after he unilaterally recognized Jerusalem as Israel’s capital.

Trump further angered the Palestinians by presenting a two-state peace plan that would have required significant Palestinian concessions on territory and sovereignty, moved the U.S. Embassy there from Tel Aviv, cut off aid to the Palestinian Authority and rescinded a longstanding legal opinion that Israeli settlement activity is illegitimate under international law.

U.S. President Joe Biden won initial but cautious plaudits from Mideast analysts when he rejected the Trump administration’s unabashedly pro-Israel stance and tentatively embraced the Palestinians by restoring aid and diplomatic contacts. But he also retained key elements Trump’s policies, including on settlements.

In the past two weeks, the United States blocked four attempts by the U.N. Security Council to demand an end to the Israeli offensive against Gaza, saying a statement could interfere with diplomatic efforts. U.S. Ambassador Linda Thomas-Greenfield told Thursday’s assembly meeting, “I don’t believe there is any country working more urgently or fervently toward peace.”

U.N. Secretary-General Antonio Guterres told reporters after Israel and Hamas agreed to a cease-fire that Israel and the Palestinians have a responsibility to observe it and “to start a serious dialogue to address the root causes of the conflict."

Whether a serious effort takes place to try to revive efforts to end the decades-old Palestinian-Israeli conflict remains to be seen.

Guterres underscored the U.N.'s commitment to work with Israelis and Palestinians to return to peace negotiations, including through the Quartet of Mideast mediator — the U.N., U.S., European Union and Russia.

U.S. Ambassador Linda Thomas-Greenfield said the Biden administration is “committed to working with other members of the international community over the long term to create the conditions for a lasting and sustainable peace."