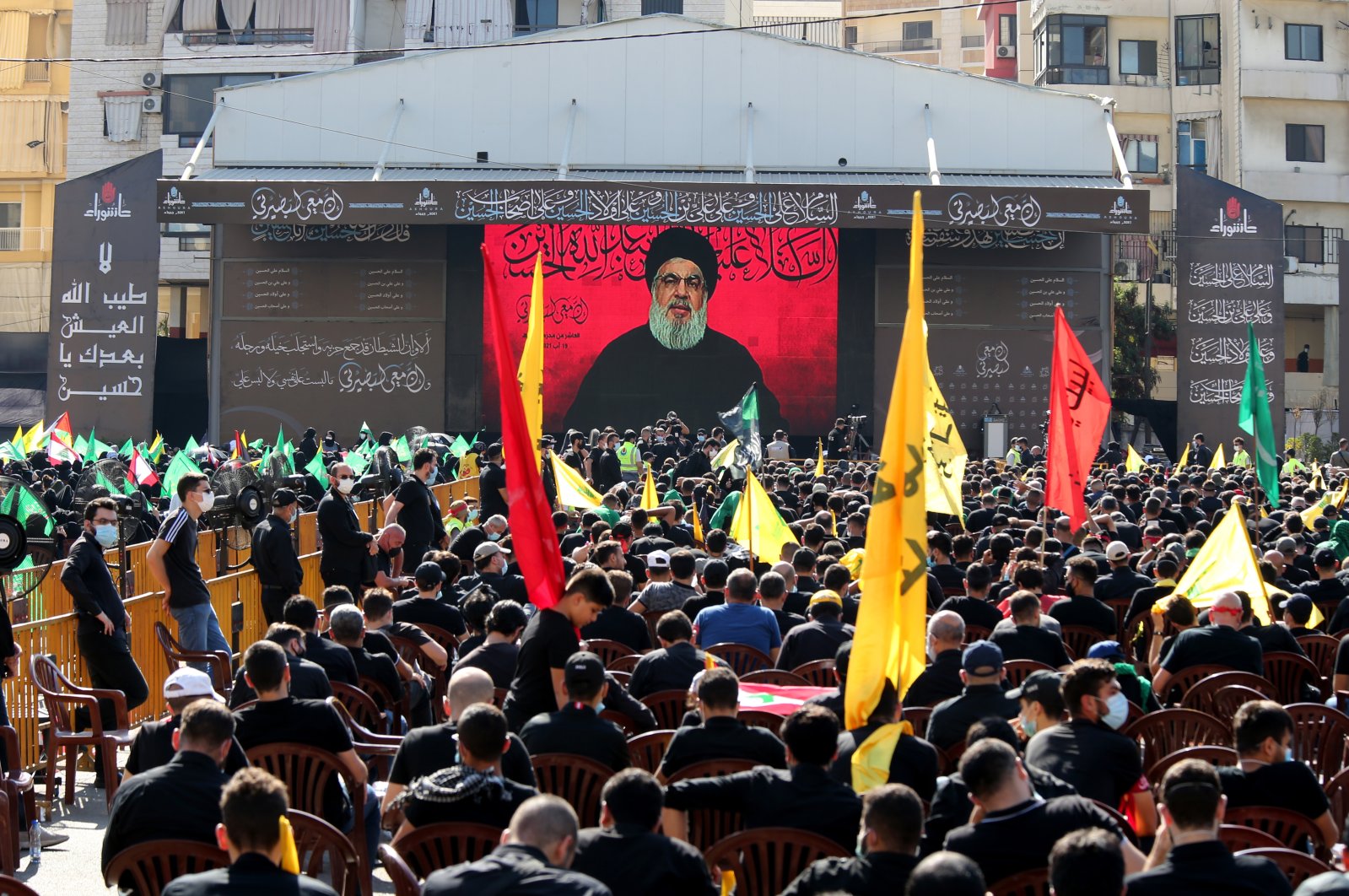 Supporters listen to the speech of Hezbollah leader Hassan Nasrallah during an Ashura Day procession in a southern suburb of Beirut, Lebanon, 19 Aug. 2021. (EPA/NABIL MOUNZER)
by DAILY SABAH WITH AGENCIES Aug 19, 2021 2:29 pm
RECOMMENDED

A shipment of Iranian fuel oil will be setting sail on Thursday for Lebanon, organized by the Lebanese group Hezbollah, which has cautioned its U.S. and Israeli foes against any moves to halt the consignment that is aimed at easing an acute fuel crisis.

The chief of the Lebanese pro-Iranian Hezbollah movement, Hassan Nasrallah, said on Thursday that subsequent ships will follow to help the Lebanese people, who are severely under fueled as a result of the country's financial collapse.

"Our first ship, which is ready to set out from Iran loaded with the necessary fuel supplies, has completed all the arrangements, and it will sail within hours. Other ships will follow it," Nasrallah said in a televised address. "We tell the Americans and the Israelis that the ship, from the moment it sails in a few hours, will become Lebanese territory," he added.

“God willing, this ship and others will arrive safely,” Nasrallah said in the address commemorating Ashura, when Shia Muslims mark the death of the Prophet Mohammed’s grandson Hussein in battle in 680. Nasrallah hinted that if the tanker is attacked, his group would have the right to retaliate.

Nasrallah, whose armed group was founded in 1982, did not specify where or when the ship would arrive, saying it would be discussed when it reached the Mediterranean.

There was no immediate comment from the Lebanese government.

The arrival of Iranian fuel would mark a new phase in the financial crisis, which the Lebanese state and its ruling factions, including Hezbollah, have failed to tackle even as poverty soars and shortages trigger deadly violence.

The worst crisis since the 1975-90 civil war, Lebanon's meltdown has hit a crunch point with hospitals, bakeries and other essential services being forced to shut or scale back due to power cuts and the acute scarcity of gasoline. In April, Reuters reported that the Hezbollah was readying fuel storage capacity as part of plans to respond to the crisis.

The group has militants and influence in neighboring Syria, where Hezbollah fought in support of Bashar Assad.

Lebanon's former Prime Minister Saad Hariri on Thursday slammed the announcement of an Iranian fuel ship sailing to Lebanon, saying it will pose more risks and cause isolation of Lebanon by the international community.

"Is what we heard this morning on the arrival of Iranian ships good news to the Lebanese people or a dangerous announcement where Lebanon will be involved in internal and external conflicts?" Hariri said on Twitter.

Hariri said the ship was sent without coordination with the Lebanese government, but with the Hezbollah group. He also said the fuel crisis in Lebanon is due to the smuggling of fuel from Lebanon to the Syrian regime.

"The (Hezbollah) party also knows that the Iranian support ships will pose additional risks and penalties to the Lebanese, similar to the sanctions to which Venezuela and other countries are subject," Hariri said, as Anadolu Agency (AA) reported. He also accused Iran of hindering the formation of the Lebanese government.

Hezbollah has yet to comment on Hariri's comments, but earlier Nasrallah said Iran never hindered the formation of the Lebanese government.

Lebanon has been unable to form a new administration since the resignation of Hassan Diab's Cabinet on Aug. 10, 2020, six days after the massive Beirut port blast.