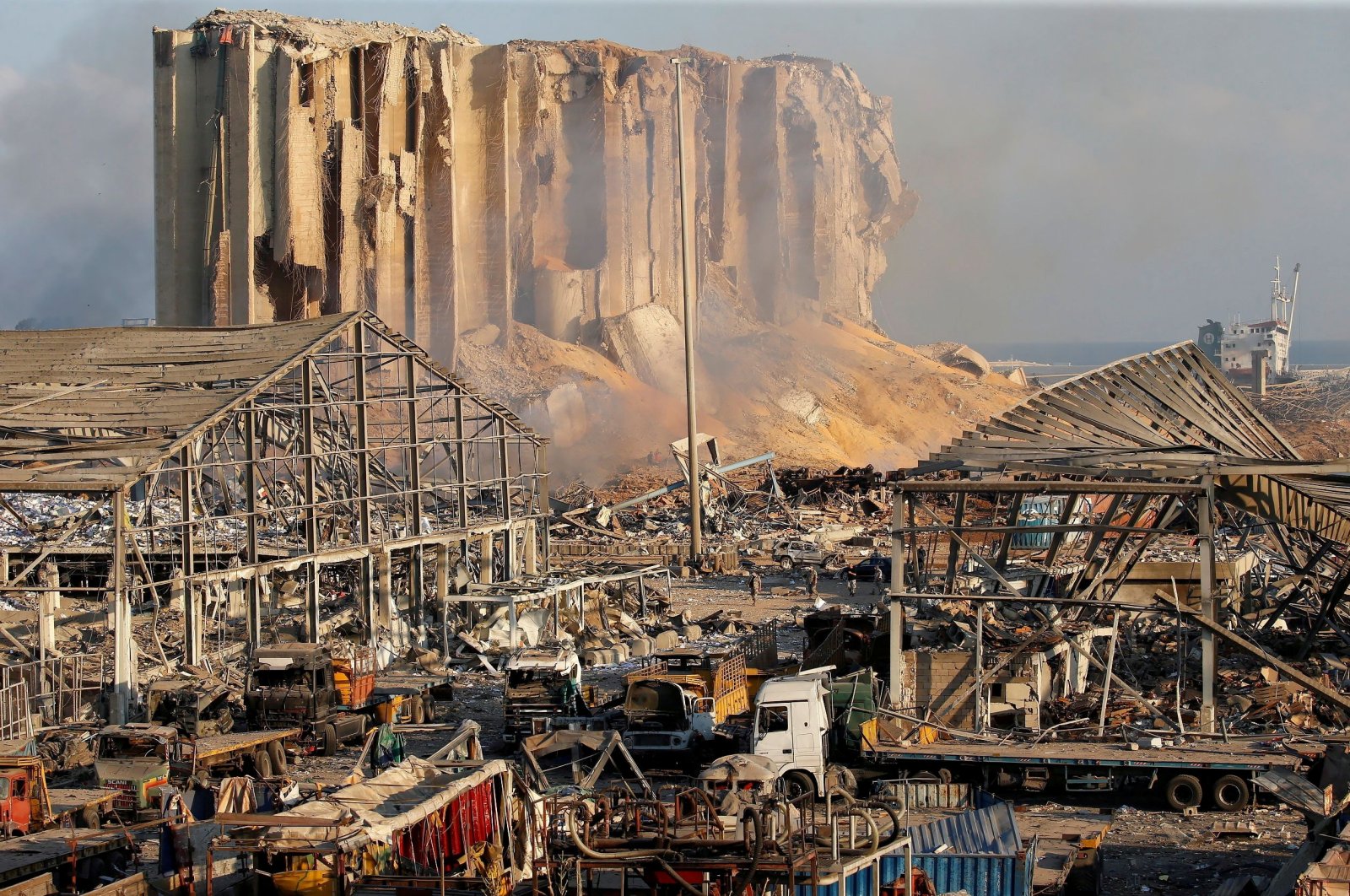 A year after the monster blast in Beirut port, rights groups and families of victims accuse Lebanese officials of stalling the investigation into the devastating explosion that killed hundreds of people and left more injured and homeless

A year after a catastrophic explosion hit the Beirut port and devastated large swathes of the city, the victims' families are worried that justice will never be delivered while prominent human rights organizations are calling for the Lebanese officials blamed for the tragedy to be held responsible.

As Lebanon marks one year since the horrific Aug. 4 blast that ripped through Beirut, killing at least 214 people, injuring more than 6,000 and destroying or damaging thousands of homes and businesses, Human Rights Watch (HRW) released a new report Tuesday asserting that senior Lebanese officials knew of the risks posed by the highly explosive material stored for years at the port and did nothing to protect the public against it.

In a report on last year's massive blast, HRW said those same officials are now trying to thwart the investigation.

The explosion was preceded by a huge fire at a port warehouse after hundreds of tons of improperly stored ammonium nitrate detonated.

A year later, the investigation has yet to answer questions such as who ordered the shipment of the chemicals and why officials ignored repeated internal warnings of their danger. In the 650-page report titled "They Killed Us from the Inside,” the New York-based group published scores of documents and exchanges between Lebanese officials about the ammonium nitrate haphazardly stored for nearly six years at the port.

"The actions and omissions of Lebanese authorities created an unreasonable risk of life,” the report said, adding that under international human rights law, a state’s failure to act to prevent foreseeable risks to life is a violation of the right to life.

In addition, HRW said evidence strongly suggests some government officials foresaw the possible devastation from the nitrate's presence and tacitly accepted the risk.

"Evidence strongly suggests that some government officials foresaw the death that the ammonium nitrate's presence in the port could result in and tacitly accepted the risk of the deaths occurring," the report said. "Under domestic law, this could amount to the crime of homicide with probable intent, and/or unintentional homicide,” it added.

The report names senior leaders, including President Michel Aoun, then-Prime Minister Hassan Diab, a former Lebanese army chief, senior security officials and several ministers among others who were informed of risks posed by the nitrate in the middle of a densely populated commercial and residential area but failed to take the necessary actions to protect the public. Lebanese officials have acknowledged they knew about the nitrate and either claim they pursued the matter after learning about it, or that they did not act as it was not within their jurisdiction.

HRW said a lack of judicial independence, constitution-imposed immunity for high-level officials, and a range of procedural and systemic flaws in the domestic investigation rendered it "incapable of credibly delivering justice.”

"Lebanese authorities have spent the past year shamelessly obstructing victims' quest for truth and justice," Amnesty International said in a statement.

"Given the scale of this tragedy, it is astounding to see how far the Lebanese authorities are prepared to go to shield themselves from scrutiny," said Lynn Maalouf, Amnesty's deputy regional director, according to remarks carried by Agence France-Presse (AFP).

Aya Majzoub, a researcher on Lebanon at HRW, said: "all the individuals named in the report knew of the dangers posed by the material and had a responsibility to act and failed to act under international law." Speaking to The Associated Press (AP), she said: "That’s a grave human rights violation. It’s a violation of one of the most basic rights, the right to life.”

The Rhosus, the ship that carried the 2,750 tons of ammonium nitrate to Lebanon in 2013, was supposedly sailing from the Georgian Black Sea port of Batumi and bound for the Mozambican port of Beira. It made a stop in Beirut to try to earn extra money by taking on several pieces of heavy machinery. But that additional cargo proved too heavy for the Rhosus and the crew refused to take it on.

The Rhosus was soon impounded by the Lebanese authorities for failing to pay port fees, and never left the port again. HRW said questions remain whether the shipment was intended to reach Mozambique or whether "Beirut was the intended destination" all along. It said evidence currently available also indicates multiple Lebanese authorities were, at minimum, criminally negligent under Lebanese law in their handling of the Rhosus cargo.

Last month, Lebanon's lead investigating judge in the case, Tarek Bitar, announced he intends to pursue senior politicians and former and current security chiefs in the case and requested permission for their prosecution.

Those named in the probe – including the outgoing prime minister, lawmakers and top generals – have so far not shown up at the prosecutor’s office, citing that they either have immunity as members of parliament or need special permission from the prime minister or the interior minister to appear.

However, families of the victims have accused the country’s leadership of obstructing Bitar’s investigation. In February, a Lebanese court removed his predecessor, Judge Fadi Sawwan, from office after he accused ministers and outgoing Prime Minister Diab of criminal negligence.

“We had faith that Lebanese judges with integrity could carry out an investigation,” Ibrahim Hoteit, whose brother was killed in the blast, said. “Judge Bitar proved he has integrity, but the problem is that we don’t have honorable politicians.”

After the massive blast at Beirut's port, only a small part of Hoteit’s younger brother was identified: his scalp. His brother was a large man, a firefighter, a martial arts champion, but Hoteit buried him in a container the size of a shoebox. Since then, Hoteit has sold his business and sleeps only a few hours a night. One thing drives him now: winning justice for the victims and punishing Lebanon’s political elite, blamed for causing the disaster through their corruption and mismanagement.

"I don’t see a minister or president or parliament speaker. I am seeing the person who killed my brother and others with him,” Hoteit said. Hoteit and his wife, Hanan, have built an association of more than 100 families of those killed. They are waging a campaign of protests trying to force politicians to allow the truth to come out. A year later, critics say the political leadership has succeeded in stonewalling the judicial investigation that was launched to uncover what happened in the explosion and who was responsible. Aiming to get around the barriers, another group of families is calling for an international fact-finding mission by the U.N. Human Rights Council.

Aoun said no one will have political cover if they are found negligent or guilty but has not addressed accusations that officials are obstructing the investigation.

Hoteit and other families say they are up against not just a government but the entire political system that has ruled Lebanon for more than 30 years. It’s a system that protects itself so intensely it seems invulnerable, even as many Lebanese say it has led the country into ruin – pointing to both the explosion and a financial meltdown that is one of the world’s worst in the past 150 years. Painted on a wall opposite the still mangled port, a large slogan that declares "My government did this” is still there.