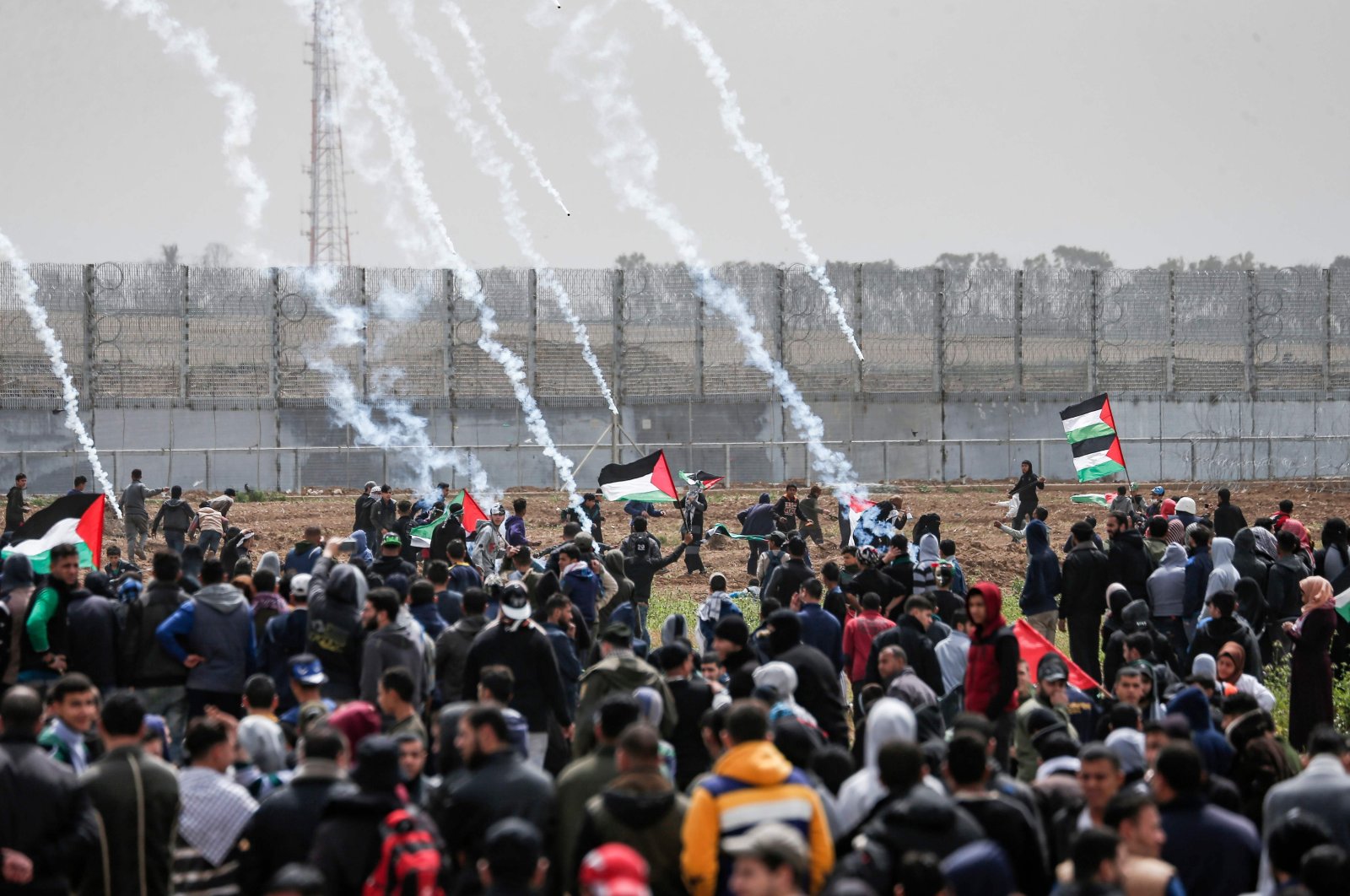 Tear gas canisters fall amongst Palestinian protesters during a demonstration near the border with Israel as Palestinians mark the first anniversary of the "March of Return" border protests in Malaka east of Gaza City, Palestine, on March 30, 2019. (AFP Photo)
by Anadolu Agency
Aug 30, 2021 4:41 pm

In a statement, the nongovernmental organization (NGO) said it had previously alongside other organizations filed objections to Israeli plans to erect 3,142 housing units in E1, an area sitting on roughly 15 square kilometers (about 6 square miles) of land northeast of Jerusalem where some 10,000 Bedouin reside. The Israeli government seeks to build Jewish-only residential units linking Jerusalem to the Ma’ale Adumim settlement.

"The Higher Planning Council (HPC) has sent a summoning today for a hearing on October 4 and on October 18, to discuss the objections filed by Peace Now, Ir Amim, and many others to the plans to build 3,412 housing units in E1,” Peace Now said. The HPC of the Civil Administration is responsible for approving the construction of Israeli settlements.

Peace Now condemned the settlement plan as "exceptionally lethal for the chances of peace and the two-state solution as it cuts across the West Bank and prevents the development of the metropoline between Ramallah, East Jerusalem, and Bethlehem.”

The Palestinian Authority (PA) has previously warned that the planned Israeli building in E1 will effectively cut the occupied West Bank in half and prevents the territorial contiguity of a future Palestinian state based on the 1967 borders.

International law views the West Bank and East Jerusalem as occupied territories and considers all Jewish settlement buildings on the land to be illegal. According to Peace Now, the HPC tried in July 2021 to schedule the hearing for August, which was canceled. However, the NGO said a new date in October has now been set.

"The government of Israel had an opportunity to take the plan off the table, but instead, the plan was promoted and today the HPC announced the new date for the hearing at the beginning of October, just after the holidays in Israel,” Peace Now said.

According to Peace Now, the settlement plan is not new and dates back to the 1990s but faced both local and international opposition until former Prime Minister Benjamin Netanyahu approved it in 2012.

"There have been attempts to promote this plan since the 1990s, but due to the opposition in Israel and the world, it was not promoted till Netanyahu ordered to approve it for depositing in 2012,” Peace Now said. It added the plan has been revived again during the February 2020 elections. The Israeli NGO slammed Bennett’s government for pursuing dangerous policies like his predecessor Netanyahu.

"Instead of leveraging the meeting with President Biden for a better future for the region, the government is promoting Netanyahu’s dangerous policies,” Peace Now said, calling on the government to "freeze this plan so that the Israeli interest is safeguarded and a wrong prevented.”

On Sunday, Palestinian President Mahmoud Abbas met with Israeli Defense Minister Benny Gantz in the West Bank city of Ramallah. The meeting was the first high-level meeting between Palestinians and Israelis since 2014.

During the meeting, the security and economic situations in Gaza and the West Bank were addressed, and Israel assured the Palestinian side they will take measures to strengthen the Palestinian economy, Gantz said on Twitter.

Hussein al-Sheikh, a member of Abbas' Fatah Central Committee and head of the Palestinian General Authority of Civil Affairs, confirmed that "all aspects" of Palestinian-Israeli relations were discussed during the meeting.