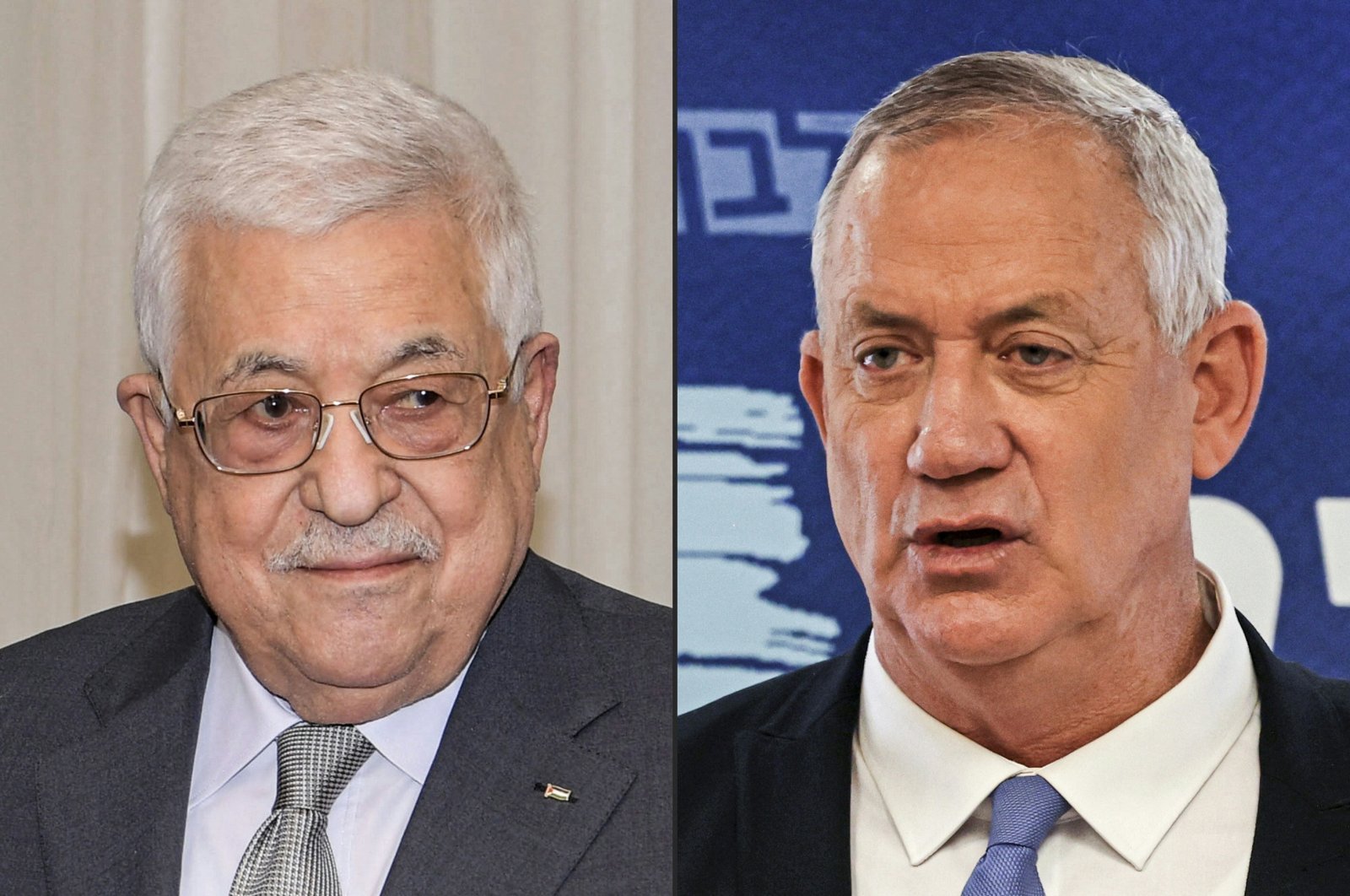 This combination of pictures created on Aug. 30, 2021, shows (L to R) Palestinian president Mahmud Abbas during a diplomatic meeting in Ramallah in a handout photo provided by the Palestinian Authority's press office (PPO) on Aug. 1, 2021, and Israeli Defence Minister Benny Gantz giving a press conference at his party's office in the Knesset in Jerusalem on June 7, 2021. (Photos by Thaer GHANAIM and Menahem KAHANA / AFP Photo / HO / PPO )
by Agencies
Aug 30, 2021 12:52 pm

Israel's defense minister met with Palestinian President Mahmud Abbas in one of the first high-level meetings between the two sides in years, officials said.

Sunday's meeting between Benny Gantz and Mahmoud Abbas signaled a possible shift of direction after the near-complete breakdown of communication between Abbas and Israeli leaders in recent years, but a source close to Israeli Prime Minister Naftali Bennett insisted Monday that his government had no plans to reboot peace talks.

It came two days after U.S. President Joe Biden urged Israel's new prime minister during a White House meeting to take steps toward improving the lives of Palestinians. Before the meeting, Biden said he would urge Bennett to find ways "to advance peace and security and prosperity for Israelis and Palestinians."

Gantz's office said he told Abbas that Israel will take new measures to strengthen the Palestinian economy. It said they also discussed security issues and agreed to remain in touch. It was believed to be the highest level public meeting between the sides since 2014.

A Palestinian official said Gantz and Abbas discussed possible steps toward improving the atmosphere. He said this included Palestinian demands for a halt in Israeli military operations in Palestinian areas of the occupied West Bank, allowing the unification of families with relatives inside Israel and allowing more Palestinian workers into Israel. The official spoke on condition of anonymity because he was not authorized to discuss the late-night meeting.

A source close to Bennett said the meeting that he had approved focused on "issues between the defense establishment and the Palestinian Authority (PA)."

"There is no peace process with the Palestinians, nor will there be," under Bennett's leadership, said the source who requested anonymity.

The Gantz-Abbas meeting included the head of the Israeli military branch responsible for civil affairs in the Palestinian territories, Ghasan Alyan, senior PA official Hussein al-Sheikh and Palestinian intelligence chief Majid Faraj. Gantz's office said he and Abbas had held "a one-on-one meeting" after the broader talks. Al-Sheikh confirmed the meeting on Twitter, but the PA was not immediately available to comment on its substance.

Bennett is a hard-liner who opposes Palestinian independence, as do key partners in his diverse, ruling coalition. But Bennett has said he supports building up the Palestinian economy and expanding autonomy for Palestinians. He also is interested in bolstering Abbas in his rivalry with the ruling Hamas group in Gaza.

While Biden supports a two-state solution between Israel and the Palestinians, his administration is focused on interim confidence-building measures.

Israel's former prime minister, Benjamin Netanyahu, pursued a hard-line policy toward the Palestinians, backed by former President Donald Trump. The Trump administration took a number of steps, including moving the U.S. Embassy in Israel from Tel Aviv to contested Jerusalem. Abbas halted most contacts with the U.S. and Israel in return. Netanyahu had repeatedly claimed Abbas was not a reliable partner for negotiating a peace deal, a portrayal dismissed by Netanyahu critics as a pretext for avoiding making concessions.

An 11-day conflict in May between Israel and Palestinians in Gaza marked the worst hostilities in the area since 2014 and unrest has persisted despite an Egypt-brokered ceasefire. Gaza's rulers Hamas condemned the Abbas-Gantz meeting, charging that it "deepens Palestinian political division."

Abbas has tightened his hold over the PA since his election in 2006. He canceled elections set for May and July that would have been the first Palestinian polls in 15 years. The veteran leader cited Israel's refusal to allow voting in annexed East Jerusalem, which Palestinians view as their future capital. But some Palestinian experts said Abbas balked when it seemed clear Hamas was poised to rout Fatah at the polls.