Iran, IAEA agree to nuclear inspection deal ahead of deadline 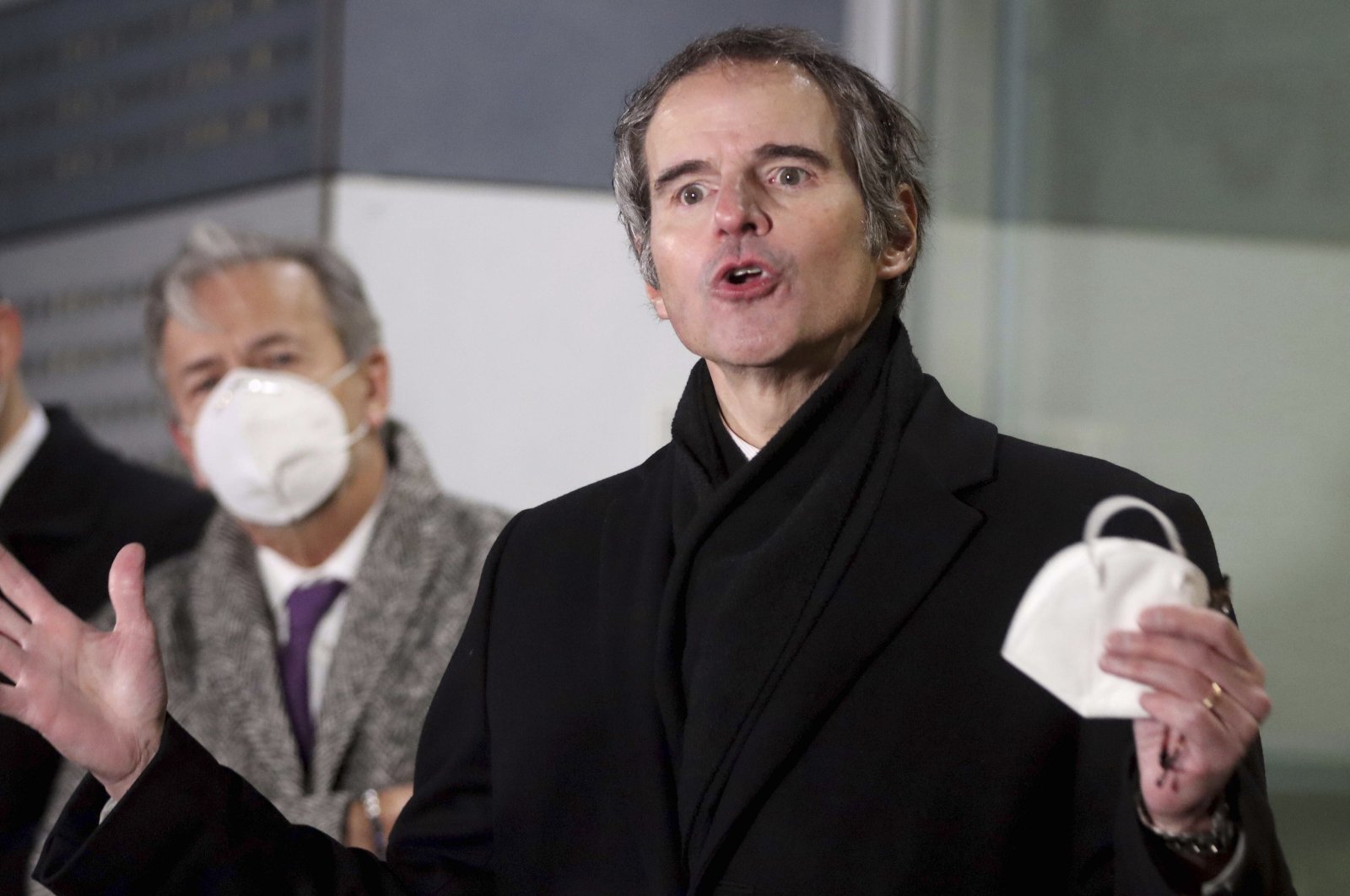 Director-General of the International Atomic Energy Agency (IAEA), Rafael Mariano Grossi from Argentina, speaks to the media after returning from Iran at the Vienna International Airport, Feb. 21, 2021. (AP Photo)
by Agencies Feb 22, 2021 11:20 am

However, Rafael Grossi admitted that under the new three-month arrangement, the International Atomic Energy Agency (IAEA) would not have the same level of access after a law comes into force on Tuesday limiting some inspections.

Grossi's visit to Iran came amid stepped-up efforts between U.S. President Joe Biden's administration, European powers and Tehran to salvage the 2015 nuclear deal that has been on the brink of collapse since former U.S. President Donald Trump withdrew from it in 2018 and went on to impose sanctions on the nation.

In December, Iran's conservative-dominated parliament passed the law demanding a suspension of some inspections if the United States failed to lift sanctions by this Sunday.

Tehran had notified the U.N. body that if the suspensions were lifted it would suspend "voluntary transparency measures" – notably inspections to non-nuclear sites, including military sites suspected of nuclear-related activity. Grossi said that under the new "temporary technical understanding ... there is less access, let's face it."

"But still we were able to retain the necessary degree of monitoring and verification work," he added.

"What we agreed is something that is viable, it's useful to bridge this gap that we are having, salvages the situation now. But, of course, for a stable, sustainable situation, there will have to be a political negotiation that is not up to me," Grossi told reporters after landing back in Vienna, suggesting this created a window for talks on salvaging the nuclear deal, as Reuters reported.

Under the temporary agreement Tehran will for "three months record and keep the information of some activities and monitoring equipment," Iran's Atomic Energy Organization (IAEO) said.

"During this period, the IAEA will not have access to this information," the statement said, appearing to confirm comments from Foreign Minister Mohammad Javad Zarif that the law mandates the government to "not provide the tapes" of cameras at sites to the IAEA.

"If the sanctions are completely lifted within three months, Iran will provide this information to the IAEA, otherwise the information will be deleted forever," the statement added.

Zarif had signaled Iran wanted to avoid an "impasse" over inspections but also warned it could further step away from its commitments if Washington does not lift sanctions. Grossi had said earlier his hope in visiting Tehran was "to stabilize a situation which was very unstable."

"I think this technical understanding does it so that other political discussions at other levels can take place, and most importantly we can avoid a situation in which we would have been, in practical terms, flying blind," he added, according to remarks carried by Agence France-Presse (AFP).

Iran's deputy foreign minister, Abbas Araghchi, acknowledged Saturday that his country's inspection capability would be "reduced by about 20-30 percent" when Tuesday's law came into effect.

Grossi declined to give his own estimate of how much the IAEA's inspection capability would be reduced but said the number of inspectors would not be scaled down and that the agency would still be able to carry out some snap probes.

Biden has committed to rejoining talks on Tehran's nuclear program in a shift from Trump's policy of "maximum pressure" on Iran.

Tehran has repeatedly said it is ready to return to its nuclear commitments, on the condition Washington makes the first move by lifting the sanctions that have heaped economic pain on Iran.

But Foreign Minister Zarif warned that, if sanctions were not lifted, his nation would continue scaling back its commitments under the 2015 deal with the five U.N. Security Council (UNSC) permanent members and Germany.

The stockpile of "enriched uranium will increase," he said, stressing that Tehran had the right within the agreement to stop observing commitments "totally or partially" if the other parties fail to honor theirs.

"We are still in the partial phase," Zarif said. "We can be total."

The European Union's political director, Enrique Mora, has proposed an "informal meeting" involving Iran, with Washington accepting in principle. Araghchi said Saturday that Tehran was reviewing the proposal and discussing it with "friends and allies," China and Russia.

Meanwhile, Turkish President Recep Tayyip Erdoğan said Sunday there was a "window of opportunity" for the lifting of Iran sanctions, calling it "legal and logical."