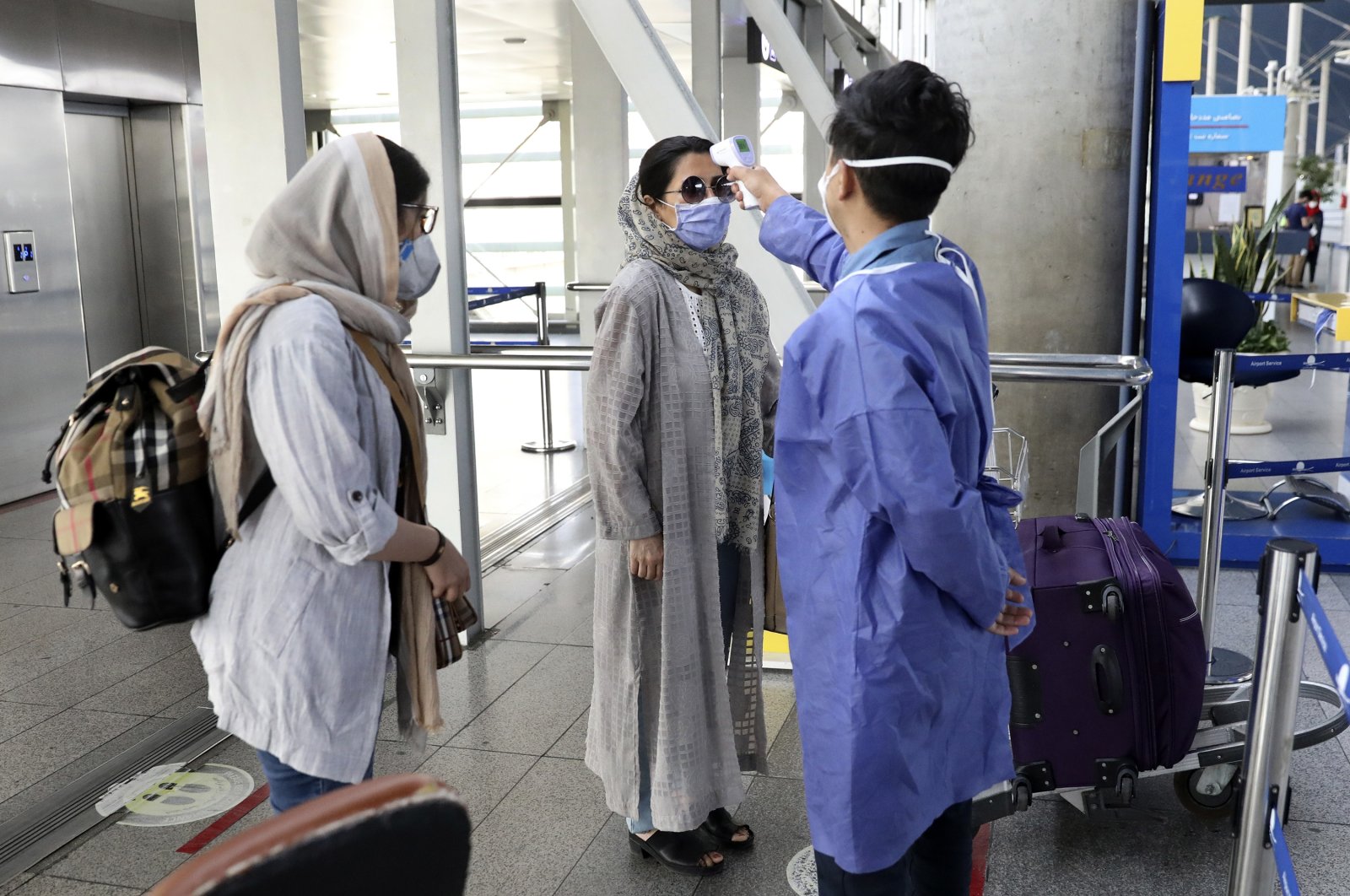 A health worker (R) checks the temperature of passengers to help prevent the spread of the coronavirus upon arrival at the departure terminal of Tehran's Imam Khomeini airport, Iran, July 17, 2020. (AP Photo)
by ASSOCIATED PRESS Oct 11, 2020 2:10 pm
RECOMMENDED

Iran announced on Sunday its highest single-day death toll from the coronavirus with 251 confirmed dead.

Health Ministry spokesperson Sima Sadat Lari said this pushes the total confirmed death toll to 28,544, making it the hardest-hit country in the region.

A further 3,822 new cases were confirmed over the past 24 hour-period, raising total nationwide recorded cases to 500,075. Nearly 4,509 patients are in critical condition.

Meanwhile, Iran’s currency hit another record low on the same day a local news report said the head of the country’s atomic energy organization had tested positive for the coronavirus, becoming the latest senior official to become infected.

The semiofficial Tasnim news agency said Ali Akbar Salehi, who is also a vice president of Iran, had confirmed positive for the virus last week and has been in home quarantine since. The news agency reported that his health condition is currently good.

Iran has recorded at least 28,000 deaths out of around 496,000 confirmed cases of the virus, making it the hardest-hit country in the region. Just last week, Iran reported its highest daily death toll from the virus with 239 new fatalities reported on Wednesday.

Iran has struggled to contain the spread of the virus across this nation of 80 million people, initially beating it back only to see a spike in cases again, beginning in June. The government has largely resisted imposing wide-scale lockdowns as the economy teeters from continued U.S. economic sanctions that effectively bar Iran from selling its oil internationally.

Money exchange shops in Tehran sold the U.S. dollar at 315,000 rials on Sunday, compared to what was 32,000 rials to the dollar at the time of Iran’s 2015 nuclear deal with world powers.

Salehi is known internationally as one of the key Iranian negotiators who took part in those nuclear talks. The deal curbed Iran’s nuclear activities in exchange for sanctions relief, but President Donald Trump unilaterally withdrew the United States from the agreement in 2018 and reimposed crushing economic sanctions.

The currency plummeted further on Sunday days after the Trump administration’s decision to blacklist 18 Iranian banks that had so far escaped the bulk of reimposed sanctions. The move subjects non-Iranian financial institutions to penalties for doing business with them, effectively cutting the banks off from the international financial system.

Meanwhile, a separate report by Tasnim news agency said the country's vice president in charge of budget and planning, Mohammad Bagher Nobakht, had also tested positive for the coronavirus.

Iran has seen several top officials contract the virus over past months, including senior Vice President Eshaq Jahangiri and Vice President Massoumeh Ebtekar. A number of Cabinet ministers have also tested positive, including Tourism Minister Ali Asghar Mounesan and the former Industry Minister Reza Rahmani. The head of an Iranian government task force on the coronavirus who had urged the public not to overreact about its spread was among the first senior officials to contract the virus in late February.

The virus first appeared in Iran at the same time the government was trying to shore up support for the country’s parliamentary elections, which saw the lowest voter turnout since the 1979 Islamic Revolution that brought its clerical leadership to power.