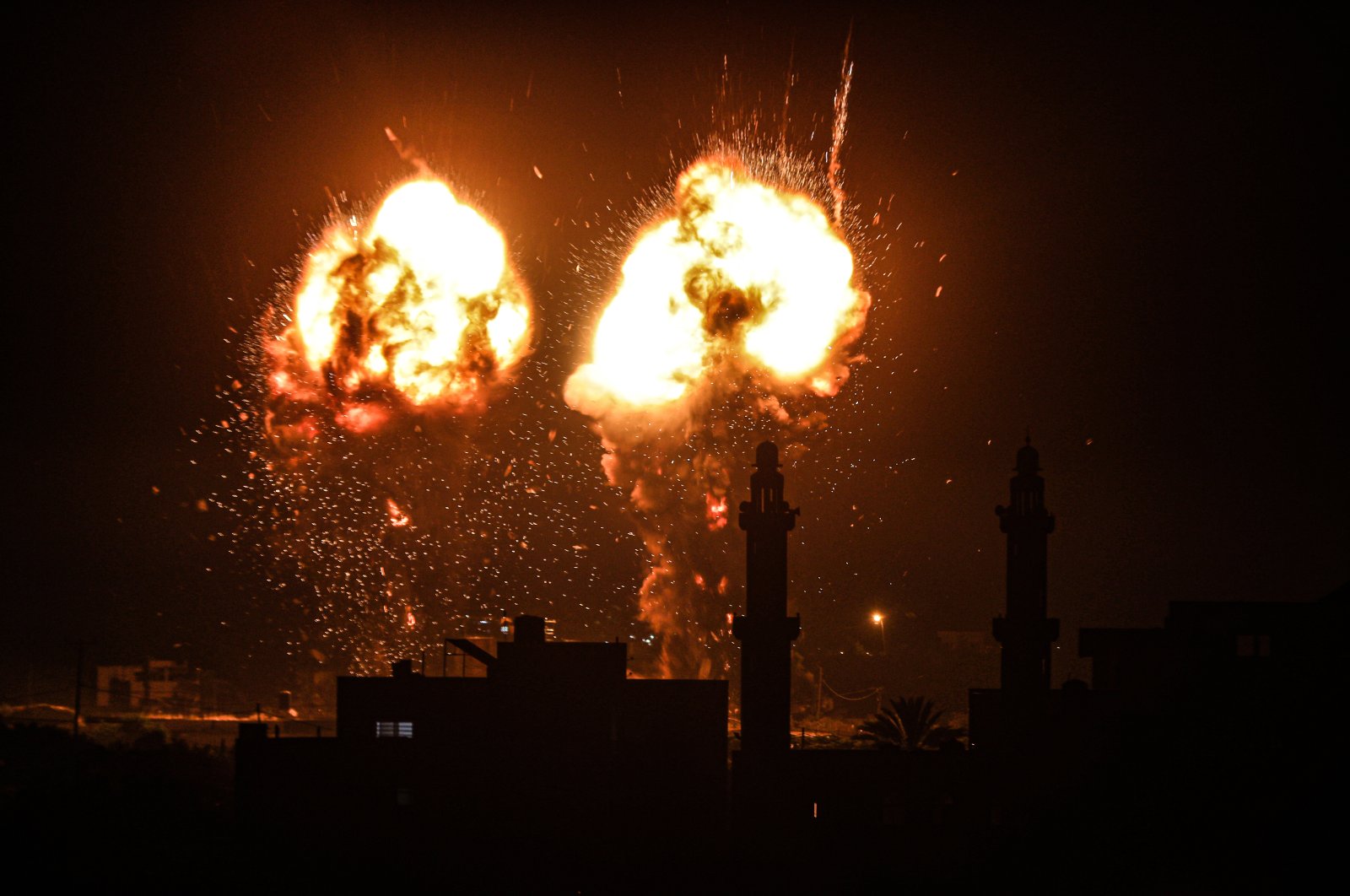 Explosions light up the night sky above buildings in Gaza City as Israeli forces shell the Palestinian enclave, early on June 16, 2021. (AA Photo)
by DAILY SABAH WITH AGENCIES Jun 16, 2021 10:37 am

Israel carried out a new wave of airstrikes on the blockaded Gaza Strip, the first such attacks since a fragile cease-fire ended 11 days of deadly fighting last month

Israel launched airstrikes on the Gaza Strip, just hours after a right-wing march took place in occupied East Jerusalem. It was the first offensive campaign against the Palestinian enclave since a major conflict in May in which hundreds were killed.

The strikes were also the first under the new coalition government headed by Naftali Bennett, who took over on Sunday after ousting former Prime Minister Benjamin Netanyahu. And they come as more than a thousand ultranationalist demonstrators bearing Israeli flags poured into Jerusalem's flashpoint Old City on Tuesday, with scores of police deployed and international monitors urging calm.

According to Palestinian sources, Israel's air force targeted at least one site east of Khan Yunis in the south of the Gaza Strip, which is home to some 2 million people.

The Israeli Defense Force (IDF) said the offensive was in response to the "arson balloons" and that its "fighter jets struck military compounds belonging to the Hamas." According to Agence France-Presse (AFP), the IDF added that "facilities and meeting sites for terrorist operatives" in Khan Yunis were targeted. There was no indication of casualties so far. The IDF added that it was "prepared for any scenario, including a resumption of hostilities, in the face of continuing terrorist activities from the Gaza Strip."

A spokesperson for Palestinian resistance group Hamas, which rules in Gaza, confirmed the Israeli attacks and told Reuters news agency that Palestinians would continue to pursue their "brave resistance and defend their rights and sacred sites" in Jerusalem. But analysts suggested Hamas refrained from firing rockets around the march and after the Israeli strikes to avoid an escalation in Gaza, which was devastated by May's aerial bombardment.

"It (the cease-fire) is very fragile. The current calm may give the Egyptians a chance to try and cement it," said Talal Okal, an analyst in Gaza.

The violence is the first flare-up between Israel and Hamas since a cease-fire came into place in May, ending 11 days of heavy fighting that killed more than 260 Palestinians, including 69 children, the Gaza authorities said.

In annexed East Jerusalem, more than 1,000 people took to the streets in a delayed and controversial march by nationalist and far-right activists. Scores of right-wing nationalists paraded through the Damascus Gate of the Old City. Palestinians saw the late afternoon march, which was set to pass through the Muslim quarter of the Old City, as a provocation. Fatah and Hamas, the two largest Palestinian organizations, issued a call for a "day of rage."

The U.S. and U.N. had called for restraint before the march, which Bennett's new administration had authorized. With tensions high, Israeli police were deployed in heavy numbers, blocking roads and firing stun grenades and foam-tipped bullets to remove Palestinians from the main route. Israel police forcibly pushed dozens of Palestinians from outside the Old City’s Damascus Gate. Medics said 33 Palestinians were wounded, while police said two officers were injured and 17 people arrested.

The demonstration triggered protests in the occupied West Bank and Gaza Strip and prompted rebukes and warnings from Israel's allies.

The so-called March of the Flags celebrated the anniversary of the city's "reunification" after Israel captured East Jerusalem from Jordan in 1967 and annexed it, a move not recognized by the international community. Tuesday's demonstration was originally scheduled for early May but canceled twice amid police opposition and threats from Hamas.

Throngs of mostly young religious men sang, danced and waved flags at the Damascus Gate entrance to the Old City, which was cleared of its usual Palestinian crowds. Some chanted "Death to Arabs" before others quieted them. Israeli demonstrators also shouted other anti-Palestinian chants, including “May your village burn.”

The march comes just two days after Netanyahu was ousted after 12 straight years in power, toppled by an ideologically divided coalition including, for the first time in Israel's history, an Arab party. Bennett is himself a Jewish nationalist, but Netanyahu's allies accused the new premier of treachery for allying with Arabs and the left. Some demonstrators on Tuesday carried signs reading "Bennett the liar."

Yair Lapid, the architect of the new government and new foreign minister, tweeted he believed the march had to be allowed but that "it's inconceivable how you can hold an Israeli flag and shout 'Death to Arabs' at the same time."

“The fact that there are radicals for whom the Israeli flag represents hatred and racism is abominable and unforgivable,” Lapid wrote on Twitter, adding that shouting racist slogans was “a disgrace to the Israeli people.”

Mansour Abbas, whose four-seat United Arab List or Raam party was vital to the coalition, called Tuesday's march a "provocation" that should have been canceled. Abbas said Tuesday’s march was “an attempt to set the region on fire for political aims,” one that intended to undermine the new government.

“I call on all sides not to be dragged into an escalation and maintain maximum restraint,” he said, emphasizing again that the controversial march should have been canceled by police and public security minister. In years past, the rally passed through the Damascus Gate into the Muslim Quarter, a bustling Palestinian quarter with narrow streets and alleys. But on Tuesday, the police changed their route to avoid entering the Muslim quarter.

Instead, the demonstrators went around the ancient walls of the Old City and through the Jaffa Gate, the main tourists place, to the Jewish Quarter and the Western Wall, the holiest place for Jews to pray.