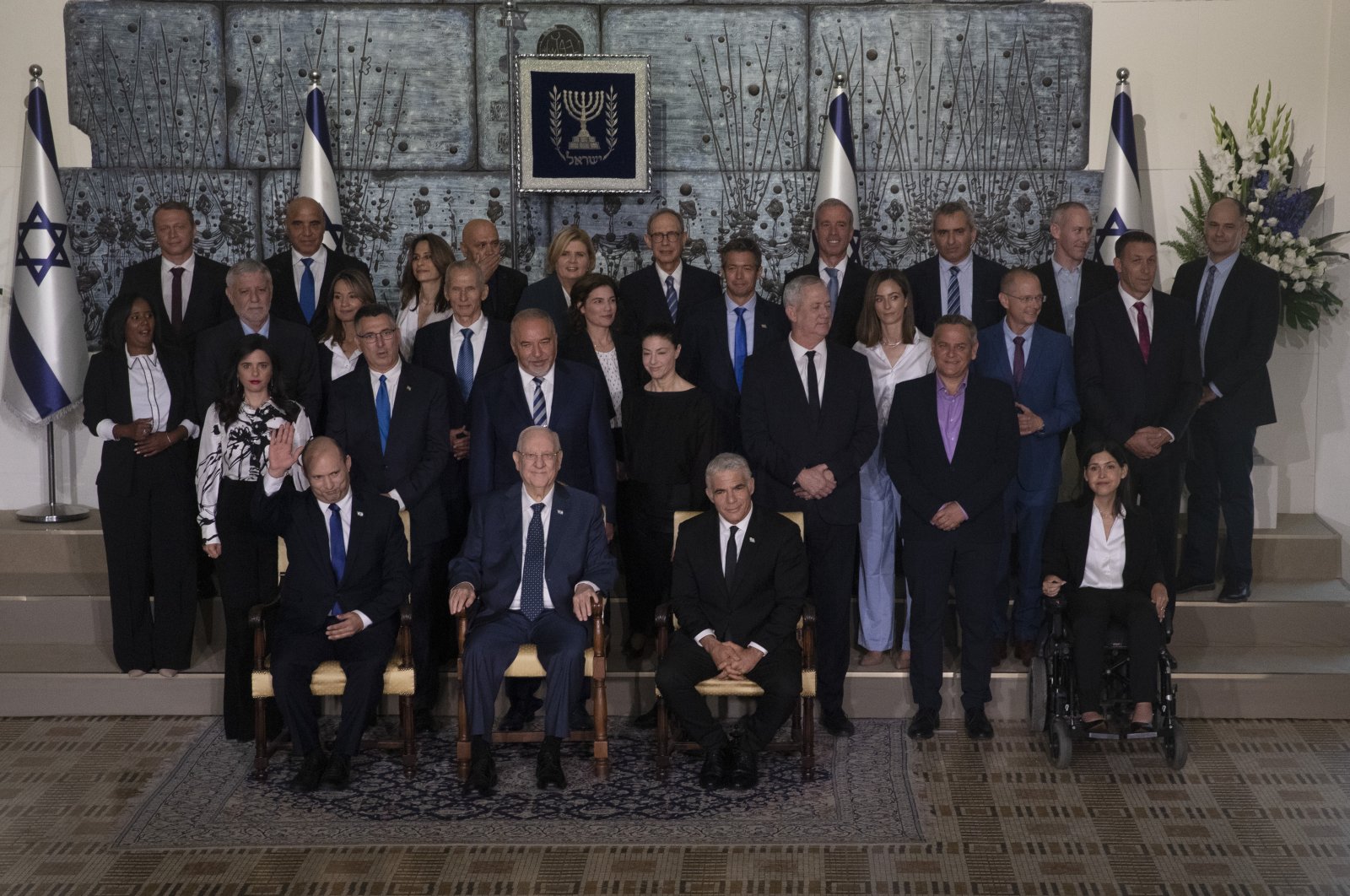 The new Israeli government that ousted veteran Prime Minister Benjamin Netanyahu has started to settle in, with 27 ministers meeting in Jerusalem with President Reuven Rivlin for a traditional photo and introducing the new Cabinet

For the first time in 12 years, Israelis on Monday woke up to a new government, headed by right-wing religious-nationalist Naftali Bennett after he secured the backing of parliament and ousted longtime leader Benjamin Netanyahu.

The two were slated to hold a handover meeting Monday but without the formal ceremony that traditionally accompanies a change in government. Israel’s parliament, the Knesset, narrowly approved the new Bennett-led coalition government Sunday, ending Netanyahu’s historic 12-year rule.

The divisive former prime minister, the longest to hold office, will now serve as the opposition leader.

David Bitan, a Likud lawmaker, told Kan public radio that Netanyahu was not holding the handover ceremony with Bennett because he feels "cheated” by the formation of the Bennett-Lapid government and "doesn’t want to give even the slightest legitimacy to this matter.”

Under a coalition agreement, Bennett will hold the office of the premier for the first two years of the term, and then Foreign Minister Yair Lapid, the architect of the coalition, will become prime minister.

Outgoing President Reuven Rivlin, who finishes his term in office next month, hosted Bennett, Lapid and the rest of the Cabinet at his official residence in Jerusalem for the official photo of the new government. Bennett and Lapid declined to give comments to the press.

Topaz Luk, a Netanyahu aide, told Army Radio that the former prime minister will "fight this dangerous and horrible government" as opposition leader.

"He’s full of motivation to topple this dangerous government as soon as possible,” Luk said.

World leaders have congratulated Bennett on becoming the 13th person to hold the office of the Israeli prime minister. British Prime Minister Boris Johnson congratulated Bennett and Lapid on forming a government, tweeting that "this is an exciting time for the UK and Israel to continue working together to advance peace and prosperity for all.”

Indian Prime Minister Narendra Modi, who shared close ties with Netanyahu, congratulated Bennett in a tweet in Hebrew, saying he "looks forward to meeting you and deepening the strategic relations between our countries.” Modi also voiced his "deep recognition” of Netanyahu’s leadership.

Lapid, Israel’s new foreign minister and alternate prime minister, spoke with U.S. Secretary of State Antony Blinken and "discussed the special relationship between the US and Israel," he wrote on Twitter.

Russian President Vladimir Putin on Monday congratulated Bennett and noted that constructive cooperation meets the fundamental interests of the people of the two countries.

"Accept my sincere congratulations on the occasion of your inauguration as Prime Minister of the State of Israel," Putin said in a message released by the Kremlin. He stressed that the relations between the countries are of a friendly nature.

"I expect that your work at the helm of the government will facilitate a further development of constructive bilateral cooperation along all directions," the Russian president said. "No doubt it is in the vital interests of our people," Putin said, adding that Russia-Israeli cooperation would help strengthen "peace, security and stability" in the Middle East.

Bennett, 49, a former ally of Netanyahu turned rival, became prime minister after the 60-59 vote in Knesset on Sunday. The motion passed after a member of the coalition was taken by ambulance from hospital to the parliament building to cast her vote and despite an abstention by a member of the Arab Israeli United Arab List (Raam) party. He heads a diverse and fragile coalition comprised of eight parties with deep ideological differences, ranging from a small Arab party to Jewish ultranationalists.

Bennett said he is prioritizing mending the many rifts dividing Israeli society. Bennett's ultranationalist Yamina party won just seven seats in the 120-member Knesset in the March elections. But by refusing to commit to Netanyahu or his opponents, Bennett positioned himself as kingmaker. Even after one member of his religious-nationalist party abandoned him to protest the new coalition deal, he ended up with the post of premier. Bennet, widely known for his anti-Palestinian stance, may find it difficult to get along with slightly more liberal colleague Lapid and the United Arab List, headed by Mansour Abbas.

The Knesset vote capped a chaotic parliamentary session and ended a two-year period of political paralysis in which the country held four deadlocked elections. Those votes focused largely on Netanyahu’s divisive rule and his fitness to remain in office while on trial for corruption charges. Netanyahu has made clear he has no intention of exiting the political stage.

"If it is destined for us to be in the opposition, we will do it with our backs straight until we topple this dangerous government and return to lead the country,” he said Sunday.

To his supporters, Netanyahu is a global statesperson uniquely capable of leading the country through its many security challenges. But to his critics, he has become a polarizing and autocratic leader who used divide-and-rule tactics to aggravate the many rifts in Israeli society. Those include tensions between Jews and Arabs, and within the Jewish majority between his religious and nationalist base. For Palestinians, during Netanyahu-era their national struggle reached its historic climax. Palestinian Foreign Ministry said Saturday that Netanyahu attempted to save himself at the cost of Palestinian blood. Netanyahu tried to prevent political opponents from forming a government by escalating tensions in the occupied West Bank and Jerusalem.

"Netanyahu and his team have been relying on the spiral of bloody violence since 2009 to defend the stronghold of the right and the radical right in the occupying state,” the ministry said in the statement. "Netanyahu is doing all this to free himself from the guilty seat in court at the cost of Palestinian blood and the future of Palestinian generations.”