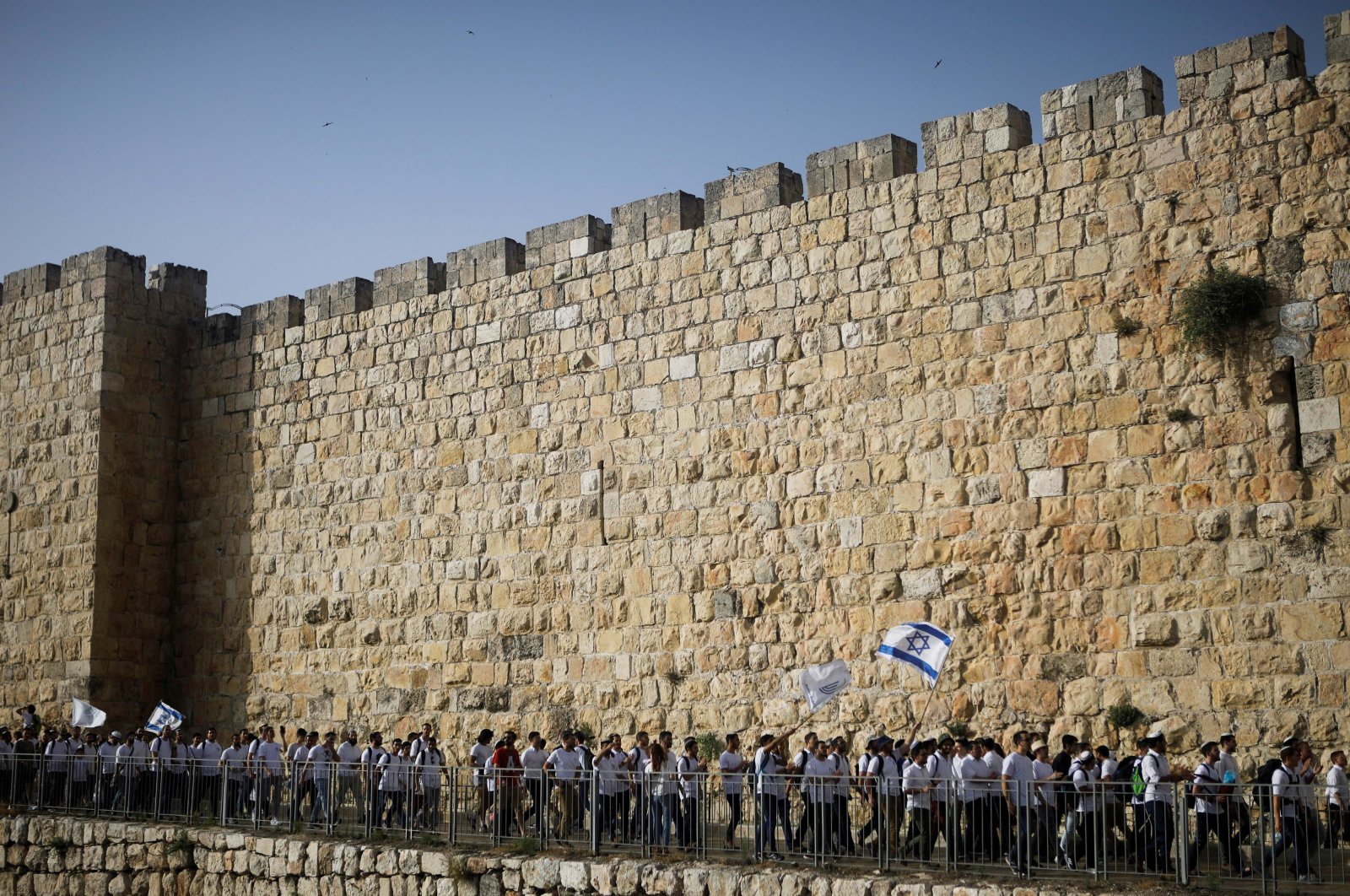 Following an Israeli far-right march through the Damascus Gate of occupied East Jerusalem’s Old City and into its Muslim quarter, the city is at risk of more protests and clashes like those that ignited last month’s Gaza war

Israel was preparing Tuesday for a controversial right-wing march in occupied East Jerusalem's Old City as fears were growing over a renewed outbreak of violence that may lead to the escalation of tensions between Israeli forces and Palestinians.

Some 5,000 right-wing nationalists were due to parade through the Damascus Gate of the Old City waving Israel's blue and white flag, with 2,000 police officers present. Palestinians saw the late afternoon march, which was set to pass through the Muslim quarter of the Old City, as a provocation. Fatah and Hamas, the two largest Palestinian organizations, issued a call for a "day of rage."

“This is a provocation of our people and an aggression against our Jerusalem and our holy sites,” Palestinian Prime Minister Mohammad Shtayyeh said.

The Israeli army has deployed additional forces to the occupied West Bank, where there was a potential for unrest spreading, according to a report in the Jerusalem Post.

The march has been organized by supporters of former Prime Minister Benjamin Netanyahu, who continues to put pressure on the new government, headed by right-wing religious-nationalist Naftali Bennett of the pro-settler Yamina party. The fragile eight-party coalition was sworn in by a margin of just one vote Sunday, marking the end of the era of Netanyahu, at least for now.

There are concerns about a fresh escalation of violence due to the march. The Palestinian Authority's (PA) deputy governor of Jerusalem, Abduallah Siam, had earlier warned of an "explosion" in the city, according to the Deutsche Presse-Agentur (dpa).

After meeting with the Israeli police chief and other security officials, newly appointed Internal Security Minister Omer Barlev approved the so-called “March of the Flags.”

“(Great) efforts are being undertaken to preserve the delicate fabric of life and public security,” Barlev was quoted as saying. It is unclear if participants will be allowed to enter the Muslim quarter of the Old City along a route previously banned by Israeli police.

Meanwhile, the U.S. Embassy in Jerusalem barred its employees and their families from entering the Old City on Tuesday “due to calls for a Jerusalem Flag March and possible counter-demonstrations.”

The march was originally due to be held on May 10 to mark Jerusalem Day but was broken off due to fighting between Israeli forces and Palestinian resistance group Hamas in Gaza Strip, after tensions escalated in the region at the end of the Islamic holy month of Ramadan. Israeli airstrikes and rocket attacks followed violent clashes over access to the Al-Aqsa complex, where hundreds of Palestinians were assaulted by Israeli forces. Israeli offensive campaign in Gaza killed 255 people, including 69 children, while 2,000 others were injured.

Israel’s fragile new government has shown little interest in addressing the decades-old conflict with the Palestinians. Jewish ultranationalists are already staging provocations aimed at splitting the coalition. In doing so, they risk escalating tensions with the Palestinians weeks after an 11-day Gaza war was halted by an informal cease-fire.

Bennett’s best hope for maintaining his ruling coalition will be to manage the conflict, the same approach favored by his predecessor for most of his 12-year rule. But that method failed to prevent three Gaza wars and countless smaller eruptions.

That’s because the status quo for Palestinians involves expanding settlements in the occupied West Bank, looming evictions in occupied East Jerusalem, home demolitions, deadly shootings and an array of discriminatory measures that two well-known human rights groups say amount to apartheid. In Gaza, which has been under a crippling blockade since the Hamas group seized power in 2007, it’s even worse.

“They talk about it being a government of change, but it’s just going to entrench the status quo,” said Waleed Assaf, a Palestinian official who coordinates protests against West Bank settlements. “Bennett is a copy of Netanyahu, and he might even be more radical.”

Bennett said little about the Palestinians in a speech before being sworn in Sunday. “Violence will be met with a firm response,” he warned, adding that: “Security calm will lead to economic moves, which will lead to reducing friction and the conflict.”

Environment Minister Tamar Zandberg, a member of the dovish Meretz party, told Israeli television’s Channel 12 that she believes the peace process is important, but that the new government has agreed, “at least at this stage, not to deal with it.”

The government faces an early challenge on Jabal Sabeeh, a hilltop in the northern West Bank where dozens of Jewish settlers rapidly established an outpost last month, paving roads and setting up living quarters that they say are now home to dozens of families.

The settlement, named Eviatar, was built without the permission of Israeli authorities on land the Palestinians say is privately owned. Israeli troops have evacuated settlers from the site three times before, but they returned.

Clearing them out again would embarrass Bennett and other right-wing members of the coalition, who already face fierce criticism – and even death threats – for allying with centrist and left-wing factions to oust Netanyahu.

Meanwhile, Palestinians from the adjacent village of Beita have held regular protests against the settlement outpost. Demonstrators have thrown stones, and Israeli troops have fired tear gas and live ammunition. Three protesters have been killed, including 17-year-old Mohammed Hamayel, who was shot dead Friday. Initial reports said he was 15.

“I always taught him you should stand up for your rights without infringing on the rights of others,” his father, Said, said at a mourning event attended by dozens of villagers. He described his son as a popular teenager who got good grades and was a natural leader. “Thank God, I’m very proud of my son,” he said, according to The Associated Press (AP). “Even in martyrdom, he distinguished himself.”

The villagers fear that if the outpost remains, it will eventually swallow up even more of their land, growing and merging with some of the more than 130 authorized settlements across the occupied West Bank, where nearly 500,000 settlers live.

“We’re not a political game in the hands of Bennett or Netanyahu,” said Mohammed Khabeesa, a resident who says he owns land near the settler outpost that he can no longer access without a military permit.

“The settlements are like cancer,” he said. “Everyone knows they begin small, and then they take root and expand at people’s expense until they reach our homes.”

Israel captured the West Bank, East Jerusalem and Gaza in the 1967 Mideast war, territories the Palestinians want for a future state. The settlements are seen by the Palestinians and much of the international community as a major obstacle to peace because they make it nearly impossible to create a contiguous, viable state of Palestine alongside Israel.

Every Israeli government since 1967 has expanded the settlements, and this one is unlikely to be an exception. Bennett briefly served as head of a major settler organization, and his party is one of three in the coalition that strongly supports the settlements.

Hagit Ofran, an expert on settlements with the Israeli rights group Peace Now, says the settlers have always used illegal outposts to challenge Israeli authorities, a trend she expects to accelerate under the new government.

“Because the settlers feel this government is not their government, challenging it, psychologically, will be much, much easier,” she said.

She hopes the new government will at least put the brakes on larger settlement projects, including massive infrastructure that will pave the way for future growth.