Israel sends envoy to US to justify banning Palestinian groups 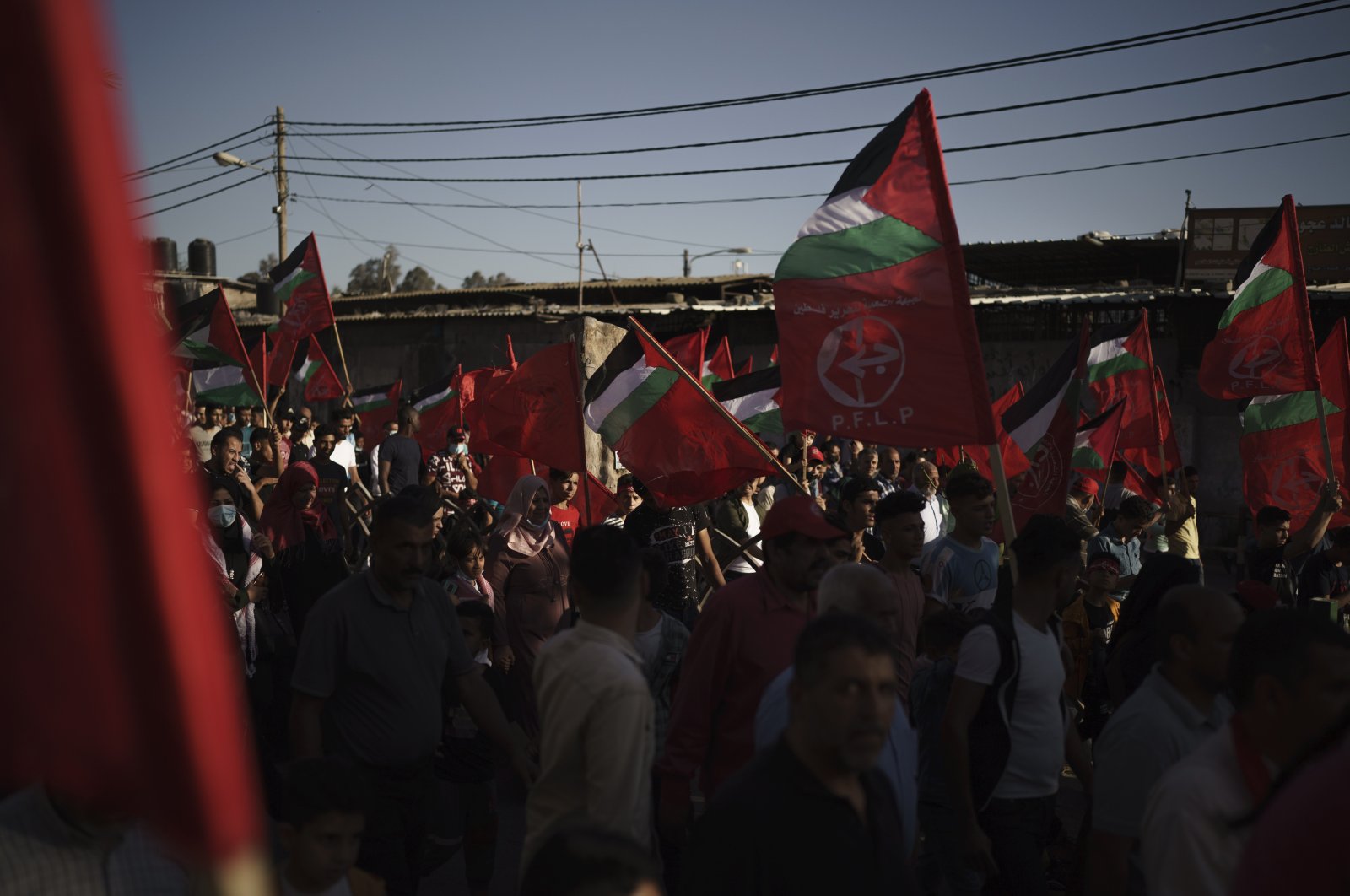 Palestinians attend a rally organized by the Popular Front for the Liberation of Palestine (PFLP), in the Gaza Strip, Palestine, June 2, 2021. (AP Photo)
by DAILY SABAH WITH AGENCIES Oct 26, 2021 9:25 am
RECOMMENDED

Israel is sending an envoy to Washington amid a deepening rift with the Biden administration over six outlawed Palestinian rights groups, a Foreign Ministry official said Tuesday.

Israel last week designated the prominent Palestinian human rights groups as terrorist organizations, sparking international criticism and repeated assertions by Israel's top strategic partner, the United States, that there had been no advance warning of the move.

Israel's move marked a major escalation of its decadeslong crackdown on political activism in the occupied territories. The U.S. State Department has said it would seek more information on the decision.

Joshua Zarka, a senior Israeli Foreign Ministry official, told Israeli Army Radio the envoy would "give them all the details and to present them all the intelligence” during his visit in the coming days. Zarka said he personally updated U.S. officials on Israel's intention to outlaw the groups last week, and said he believed Washington wanted a more thorough explanation of the decision, according to The Associated Press (AP).

The rights groups decision is emerging as a test of the relationship between the Biden administration and Israel's new government, which was formed in June by eight politically disparate parties. The coalition ended the 12-year rule of former Prime Minister Benjamin Netanyahu.

Netanyahu's hardline government enjoyed broad support from the Trump administration, which moved the U.S. Embassy to Jerusalem, largely allowed settlement building to continue unfettered, cut funding to the Palestinians and presented a vision for the Middle East that sided with Israel’s positions.

Israel on Sunday announced plans for the construction of more than 1,300 housing units in the occupied West Bank, drawing immediate condemnation from Palestinians, peace activists and global leaders.

“I am deeply concerned by continued Israeli settlement expansion in the occupied West Bank, including East Jerusalem,” United Nations Special Coordinator for the Middle East Peace Process, Tor Wennesland said in the statement. “I reiterate that all settlements are illegal under international law, remain a substantial obstacle to peace, and must cease immediately,” he added.

According to the Palestinian Chronicle news site, U.S. State Department spokesperson Ned Price said that Washington had not been informed of the move to ban Palestinian human rights organizations and that it will “be engaging our Israeli partners for more information regarding the basis for these designations.”

The Biden administration has mostly restored traditional foreign policy toward Israel and the Palestinians. But with the U.S. focused on other pressing domestic and foreign issues, the conflict was expected to take a backseat.

The fractious coalition government has also sought to minimize the Palestinian issue, agreeing not to make major moves that might threaten its stability. But in recent weeks, it has ramped up focus on the conflict, offering a number of goodwill gestures to Palestinians in the West Bank and the Gaza Strip, but also pushing forward on building thousands of new homes for Jewish settlers.

Most dramatic was the decision on the civil society groups, which has rattled the coalition and returned focus to the conflict and Israel's decadeslong occupation of Palestine.

Israel has for years alleged the groups' links to the Popular Front for the Liberation of Palestine (PFLP), a group banned by the Israeli military, but even under Netanyahu's hardline government, stopped short of labelling them terrorist groups. The declaration appeared to pave the way for Israel to raid their offices, seize assets, arrest staff and criminalize any public expressions of support for the groups. The PFLP is the second-largest group in the Palestine Liberation Organization (PLO) and was elected as a member of the Legislative Council in Palestine’s last parliamentary elections in 2006.

Most of the targeted organizations document alleged human rights violations by Israel as well as the Palestinian Authority (PA), both of which routinely detain Palestinian activists.

The designated groups are Al-Haq, a human rights group founded in 1979, as well as the Addameer rights group, Defense for Children International-Palestine, the Bisan Center for Research and Development, the Union of Palestinian Women’s Committees and the Union of Agricultural Work Committees (UAWC).

While, the decision to ban Palestinian groups was slammed by the international community alongside Palestinian authorities, high-ranking Israeli officials also have voiced their opposition to the illegal and oppressing move.

"There is no connection between these organizations and terrorism," Freij said in statements cited by the Yedioth Ahronoth daily ahead of a Cabinet meeting. He added that a strong country must know how to deal with criticism.

"Israel must be very careful in imposing restrictions on Palestinian civil society organizations," Horowitz said in a tweet. "This has implications in the field of politics, foreign relations and importantly, in the field of human rights.”

According to Anadolu Agency (AA), Zandberg also said that three of the six designated groups are "old and well-known human rights organizations."

In a joint statement Monday, more than 20 Israeli human rights groups, including some of the country's leading, most established organizations, condemned the step, calling it "a draconian measure that criminalizes critical human rights work.”