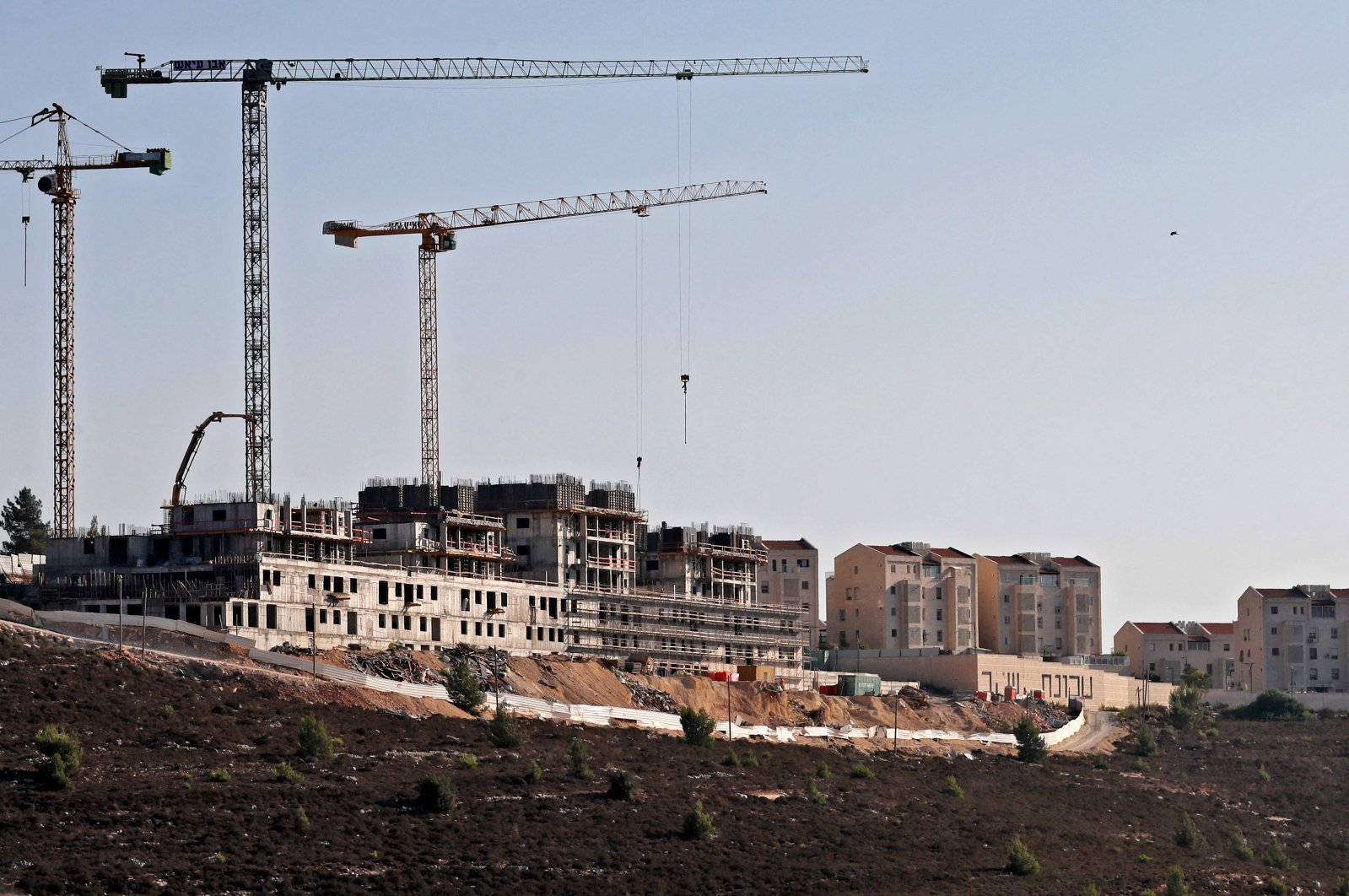 A view of construction work in the Israeli settlement of Givat Zeev, near the West Bank city of Ramallah, occupied Palestine, Oct. 5, 2021. (AFP Photo)
by Agencies Oct 25, 2021 8:53 am
RECOMMENDED

The announcement from the Israeli Housing and Construction Ministry under right-wing Prime Minister Naftali Bennett's government said tenders had been published for 1,355 homes in the West Bank, which has been occupied by Israel since the 1967 Six-Day War.

Those new homes add to the more than 2,000 residences that defense sources said in August would be authorized for West Bank settlers. Housing Minister Zeev Elkin, a member of the right-wing New Hope party, said in a statement that "strengthening Jewish presence (in the West Bank) was essential to the Zionist vision."

A government planning committee is also expected in the coming week to discuss the proposals for about 3,000 new settlement units.

The Palestinian Ministry of Foreign Affairs said the new settlement plans could have a "catastrophic impact on chances to make peace on the basis of the two-state solution and on regional, United States and international efforts to build confidence between the Israeli and Palestinian sides," according to Reuters. Palestinian Prime Minister Mohammed Shtayyeh, speaking at a weekly Cabinet meeting, called on world nations, and especially the U.S., to "confront" Israel over the "aggression" that settlement construction poses for the Palestinian people.

The Palestinian Authority (PA) will be keenly watching for a response from U.S. President Joe Biden's administration, which has said it opposes unilateral Israeli settlement construction as being an obstacle to a two-state solution to the conflict. About 475,000 Israelis live in settlements in the West Bank, which are considered illegal under international law, on land Palestinians claim as part of their future state.

Israeli Health Minister Nitzan Horowitz, leader of the dovish Meretz party, said Monday that his faction "will explicitly not agree to actions that will harm the chances of reaching a solution” with the Palestinians and called on his government to refrain from them.

"I understand that this government, in the existing situation, won't sign a peace treaty with the Palestinians right now, but still, we must avoid actions that worsen the situation,” he said.

Jordan, an Israeli security partner with whom Bennett has sought to improve ties since taking office in June, condemned the announcement as "a violation of international law." Jordanian Foreign Ministry spokesperson Haitham Abu al-Ful blasted settlement construction and general "confiscation" of Palestinian land as "illegitimate."

The European Union on Monday called on Israel to halt settlement construction and not go ahead with tenders for about 1,300 new settlement homes.

"Settlements are illegal under international law and constitute a major obstacle to the achievement of the two-State solution and a just, lasting and comprehensive peace between the parties," a spokesperson for the European Commission, the executive branch of the European Union, said in a statement. The EU has consistently made clear that it will not recognise any changes to the pre-1967 borders, including with regard to Jerusalem, other than those agreed by both sides, the spokesperson added.

Moshe Hellinger, a political scientist at Bar Ilan University, told AFP that the right-wing factions in Bennett's eight-party coalition "need to show their voters that they are defending their interests despite being in a coalition with the left."

Preserving the coalition, which also includes an Arab party, will require all sides to "swallow snakes," he said. Bennett, the former head of a settler lobby group, opposes Palestinian statehood. He has ruled out formal peace talks with the PA during his tenure, saying he prefers to focus on economic improvements.

Shortly after the settlement announcement, Israel's Defense Ministry said that it was issuing an additional 9,000 permits for West Bank Palestinians to work in the Israeli construction industry. On top of those, the goal is to add another 6,000 permits "shortly," it said. Roughly 120,000 Palestinians currently have permits to work either inside Israel or in settlements, generally earning far higher wages than equivalent work would pay in the West Bank.

The new settlement homes are to be built in seven settlements, according to the statement from the Housing and Construction Ministry. Israeli settlement expansion in the West Bank and occupied East Jerusalem has continued under every Israeli government since 1967. However, construction accelerated in the last few years under Netanyahu, with a significant boom during former President Donald Trump's U.S. administration, which Palestinians accused of egregious pro-Israel bias.