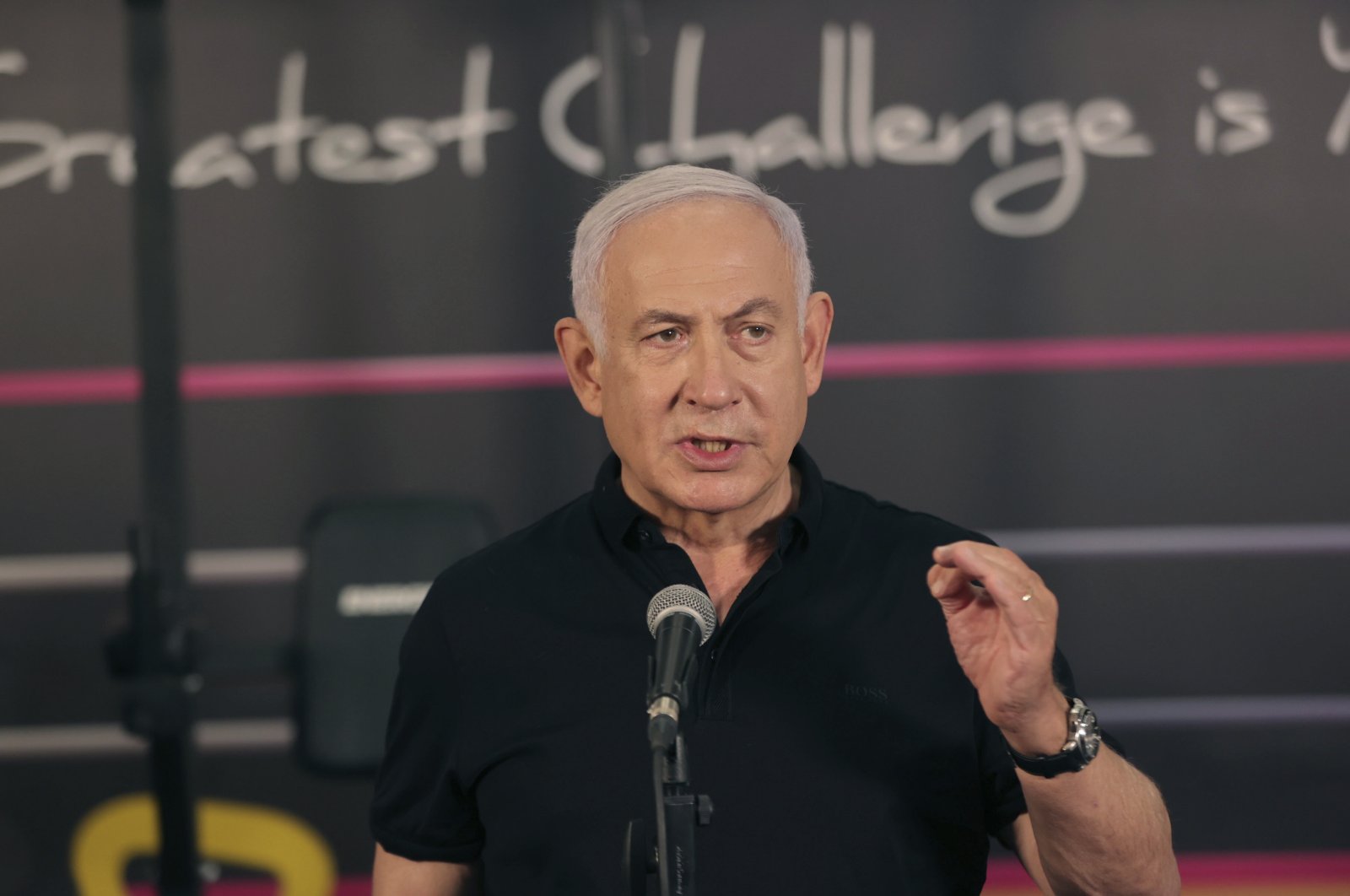 Israeli Prime Minister Benjamin Netanyahu talks to the media during a visit to the Fitness gym ahead of the re-opening of the branch in Petah Tikva, Israel, Feb. 20, 2021. (AP Photo)
by French Press Agency - AFP Feb 26, 2021 4:08 pm
RECOMMENDED

Israel has halted its plan to distribute a surplus of coronavirus vaccines as authorities examine whether it was in Prime Minister Benjamin Netanyahu's authority to order the move, the justice ministry said Thursday.

On Tuesday, Netanyahu said Israel would send a "limited quantity" of vaccines to the Palestinians, but also to several allies, including two that have announced plans to boost their diplomatic presence in Jerusalem.

Late Thursday, the justice ministry said that following requests from the general public to look into the issue, "the attorney general was examining the claim that vaccines were transferred to foreign countries without authority."

In a statement, the ministry noted that Israel's National Security Advisor Meir Ben-Shabbat had requested the attorney general's legal opinion on the decision to gift the vaccines.

According to the justice ministry, Ben-Shabbat had informed the attorney general that "an order has already been issued to freeze any activity on the topic."

An official in Netanyahu's office confirmed that Ben-Shabbat "sought a legal opinion from the attorney general on the matter" after being approached by the justice ministry, implying the process had been frozen.

This was "despite Israeli citizens not losing a single vaccine," said the official, on condition of anonymity.

"The amount set to be given to the foreign states was symbolic and creates a good image for Israel in the world," the official added.

Israel has already sent several thousand vaccine doses to the occupied West Bank to inoculate Palestinian Authority (PA) medical workers, in a decision approved by the security cabinet and overseen by the attorney general.

Earlier Thursday, Defense Minister Benny Gantz claimed that while the decision to give vaccines to the Palestinian Authority followed "due process" and was in Israel's medical interests, "supplying vaccines to other countries was never broached in relevant forums."

Centrist Gantz said the policy was pushed through without the required consultation, and was therefore "against the law." The issue must first be discussed by the security cabinet, he contended. Gantz and Netanyahu are bitter rivals who entered an uneasy coalition after elections last year.

Their arrangement quickly fell apart and the country faces in March its fourth national polls in two years. Honduras, which said last year that it would move its embassy from Tel Aviv to Jerusalem, was on the list of recipients, sources have confirmed to Agence France-Presse (AFP).

The Czech Republic, which plans to open a diplomatic office in Jerusalem next month, said Tuesday it had received 5,000 doses of the Moderna vaccine from the Jewish state. Hungary and Guatemala are also reportedly set to receive vaccines.

Israel has administered the two recommended shots of the Pfizer-BioNTech jab to more than 3.2 million people, over a third of its population. While many countries are struggling with vaccine supply, Israel has avoided shortages since launching inoculations in December.

On Wednesday, Netanyahu said the vaccines to be given were "symbolic numbers" of surpluses that "wouldn't come at the expense of even one vaccine of an Israeli citizen," and bore diplomatic weight.

Most countries maintain embassies in Tel Aviv, pending a resolution of the conflict with the Palestinians, who claim East Jerusalem as the capital of their future state. Israel sees Jerusalem as its "undivided capital," cheering nations that conduct diplomacy with the Jewish state from the disputed city.