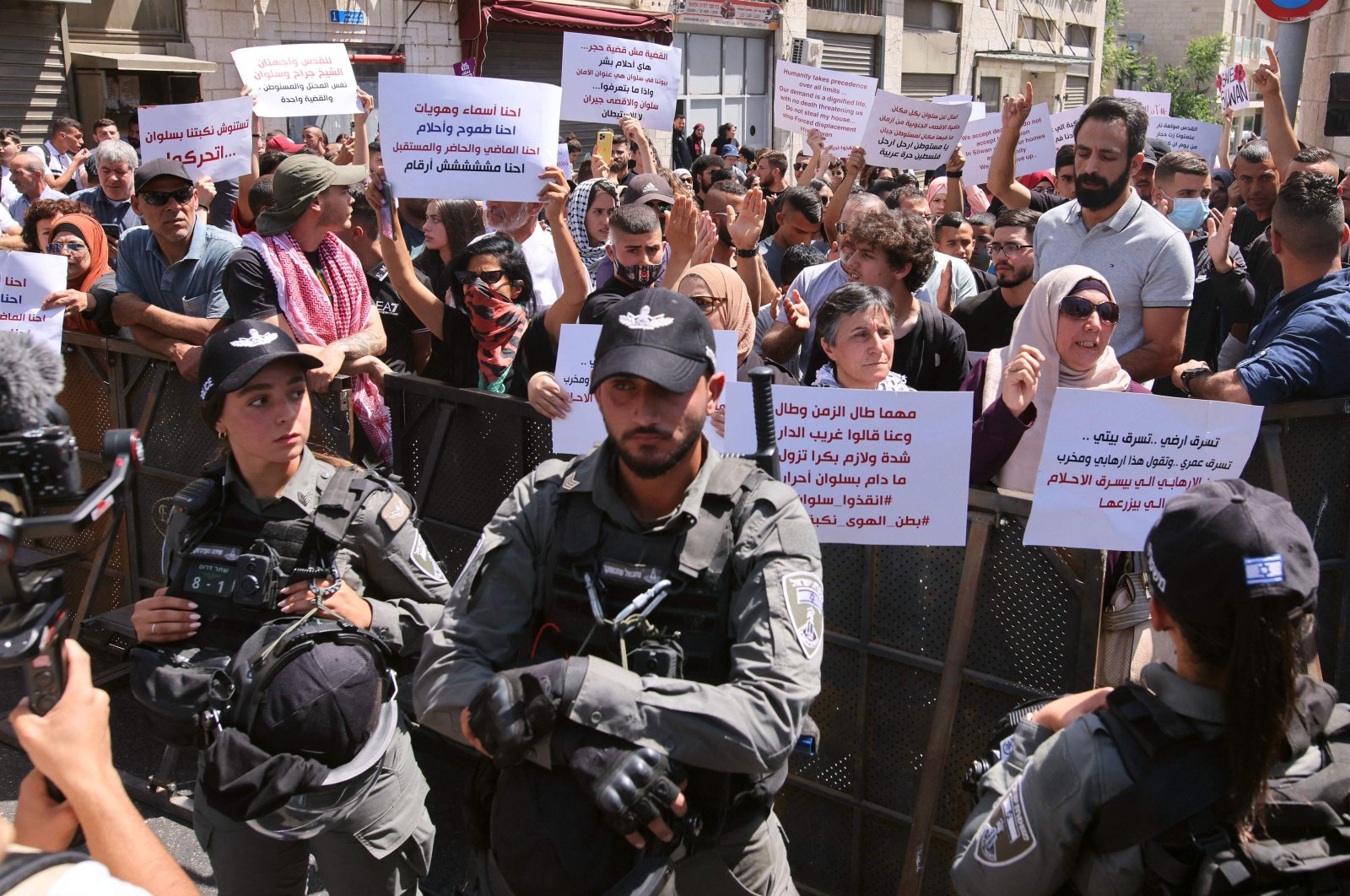 Israeli security forces keep watch as Palestinians shout slogans outside a court during a protest over Israel's planned evictions of Palestinian families from homes in the eastern sector's Silwan district, in Jerusalem, May 26, 2021. (AFP Photo)
by Daily Sabah with AFP May 26, 2021 5:36 pm
RECOMMENDED

An Israeli court Wednesday postponed a hearing in a case that could see two Palestinian families expelled from their homes in occupied East Jerusalem's Silwan district so Israeli settlers can move in, their lawyer said.

The delayed hearing on the dispute comes less than three weeks after a similar case in the city's Sheikh Jarrah district sparked tensions that ignited an 11-day armed conflict between Israel and Palestinian resistance group Hamas that rules Gaza.

Wednesday's court session was delayed after the Palestinian families petitioned the attorney general to weigh in on the matter, their lawyer Yazeed Qawaar said.

He said the families are now waiting for a decision – possibly within the next week – on whether or not the Jerusalem district court would refer the file to the top prosecutor. An Agence France-Presse (AFP) correspondent saw dozens of protesters, including Palestinians from concerned families and Israeli peace activists, demonstrate outside the court.

"What do you think, occupier?" one placard read. "My nation is steadfast and will not be humiliated."

Around 700 Palestinians in the Batn al-Hawa area of Silwan on a hill south of Jerusalem's Old City risk displacement under such forced eviction cases, Israeli anti-occupation group Peace Now says.

"The families were told for the first time about the expulsions in November 2020, and the decision was confirmed in March 2021," he said.

In the 1980s, settlers began moving into Silwan, which sits on land where – according to Jewish tradition – King David established his capital some 3,000 years ago, making the area hallowed ground in Jewish history. There are now several hundred settlers in Silwan, living among some 50,000 Palestinians.

Settlers have cited 19th-century documents from the Ottoman Empire, which controlled Jerusalem before the British mandate era began in 1920, showing that Silwan land was owned by a Jewish trust.

Palestinian families say Israeli courts do not recognize their ownership documents from the Jordanian authorities who controlled East Jerusalem until 1967 when Israel occupied that part of the city. In 1970, Israel passed a law allowing Jews to reclaim property they had lost in or before 1948, the year of Israel's creation.

Activists say that the law is discriminatory and does not offer any recourse to Palestinians who may have lost land during the same period, including for example homes in now Israeli west Jerusalem.

Amnesty International's deputy director for the Middle East and North Africa, Saleh Higazi, said the situation is yet another example of Israel's "criminal policy of forcibly displacing Palestinians."

“For years, Israel has sought to expand illegal settlements in the area of Silwan, forcibly displacing more than 200 Palestinians from their homes,” Hijazi said. “By continuing to pursue this court case – after the outcry over the planned expulsions in Sheikh Jarrah in occupied East Jerusalem – Israel is fanning the flames of the latest surge in violence and perpetuating the same systematic human rights violations against Palestinians that are at the root of the latest violence.”