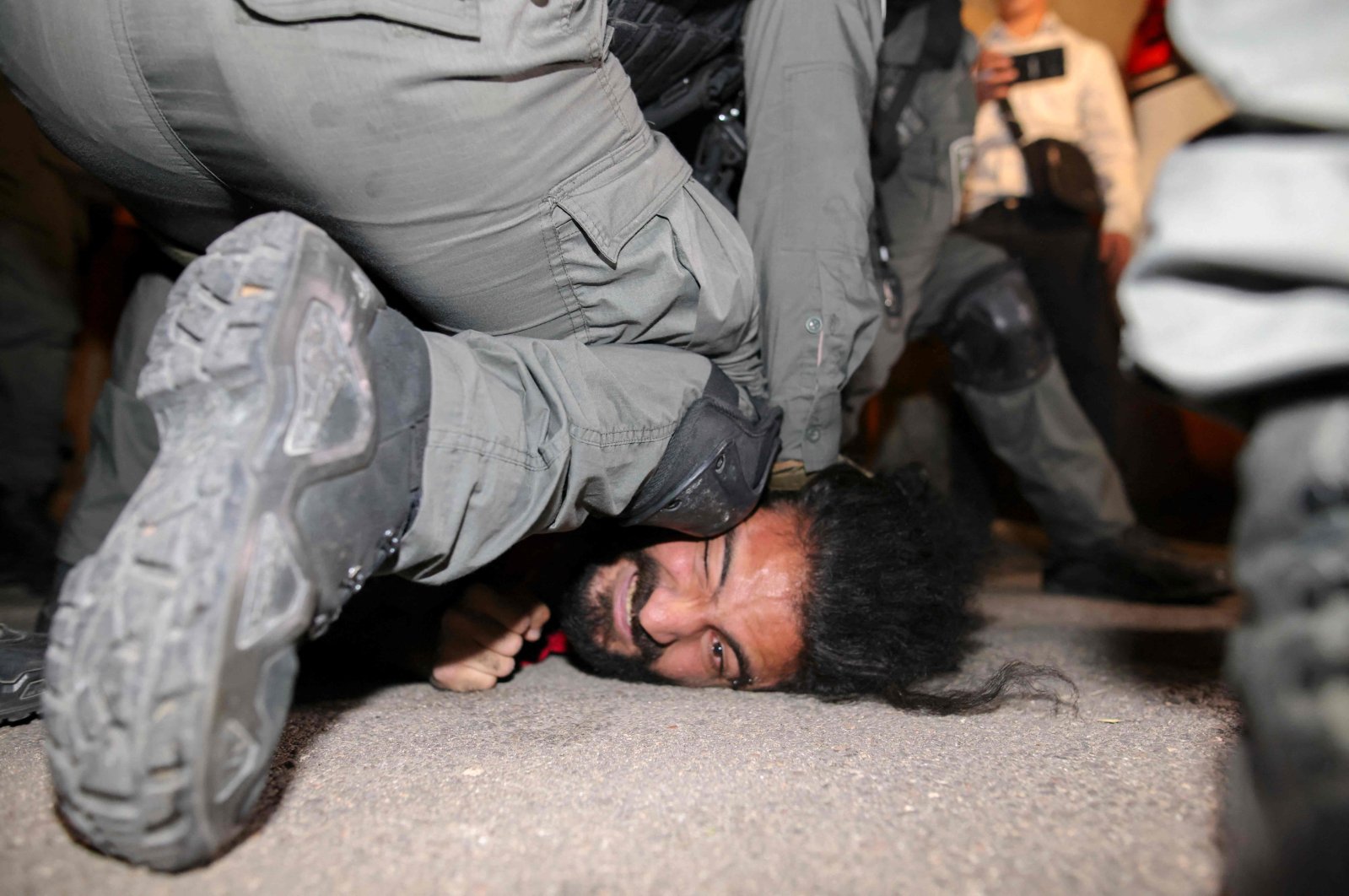 Israeli security forces detain a Palestinian man amid ongoing confrontations as Palestinian families face eviction in the Sheikh Jarrah neighbourhood of East Jerusalem, occupied Palestine, on May 4, 2021. (AFP Photo)
by Agencies
May 05, 2021 1:17 pm

The Israeli government's forced evictions caused Palestinians to protest once again, just a week after clashes near the Damascus Gate area in Eastern Jerusalem over a ban on holding Ramadan activities. As protests grow in several areas, Israel is also faced with a new crisis as Prime Minister Benjamin Netanyahu failed to form a new government.

Earlier this week, several Palestinians were injured and others were arrested by Israeli security forces during clashes in occupied East Jerusalem that were part of a demonstration of solidarity with the residents of the Sheikh Jarrah neighborhood. Three of the injured Palestinians, among at least 10 in total, were hospitalized, the Palestine Red Crescent said Monday.

Sheikh Jarrah is in East Jerusalem, which Israel conquered in 1967 and annexed in a move not recognized by most of the international community.

Since 1956, a total of 37 Palestinian families have been living in 27 homes in the neighborhood.

Israeli Jews backed by courts have taken over houses in Sheikh Jarrah on the grounds that Jewish families lived there before fleeing in Israel's 1948 War of Independence. No such protection exists for Palestinians who lost their land.

The armed wing of the Palestinian resistance group Hamas warned Israel about the clashes on Tuesday.

"They will pay a heavy price," he warned, adding they are closely following developments.

He also congratulated the Palestinian people for standing firm in occupied Jerusalem.

Israel also closed the Damascus Gate area in central Jerusalem to Palestinians since the start of the Islamic holy month of Ramadan, however, later withdrew from the area due to protests.

Amid growing protests, Israel may be on the brink of new elections for the fifth time in two years. The Israeli president met with party leaders Wednesday to determine if any lawmaker can form a government to end an unprecedented gridlock after Benjamin Netanyahu failed.

But that mandate expired on Tuesday and Netanyahu informed President Reuven Rivlin he had been unable to secure a majority in the 120-seat parliament.

Netanyahu's failure further highlighted deep fractures in the Israeli electorate, which spread its support across the political spectrum, including far-right Jewish extremists and a conservative Islamic party.

Rivlin, whose largely ceremonial role has taken on outsized prominence amid the seemingly endless cycle of elections, has voiced doubt any lawmaker could form a government.

But several political experts on Wednesday predicted he would give a chance to opposition leader Yair Lapid, a former television anchor whose centrist Yesh Atid party finished second in the March vote.

Rivlin met Wednesday with Lapid and Naftali Bennett, a religious right-winger who has become a closely-watched kingmaker, despite his Yamina party controlling only seven parliament seats.

Bennett was once a close Netanyahu ally and served as his defense minister but their relationship has disintegrated.

During Netanyahu's ongoing corruption trial where the 71-year-old premier is accused of trading regulatory favours with media moguls in exchange for favourable coverage, the court heard testimony about Netanyahu's alleged obsession with smearing Bennett.

Bennett said Monday that he would have struck a deal with Netanyahu but concluded the prime minister could not clinch a coalition.

Israeli media have watched for hints of a brewing Lapid-Bennett accord.

Lapid, already supported by much of the anti-Netanyahu bloc, on Wednesday was endorsed by a group of Likud defectors from the New Hope party as the best choice to form a government.

New Hope, led by another former Netanyahu ally, Gideon Saar, abstained during Rivlin's last round of consultations but their shift to Lapid on Wednesday could be a sign of momentum.

Lapid has said that he offered Bennett a rotating prime ministership in which he would take the first turn, in the interest of agreeing on a government that could end Netanyahu's record 12 straight years in office.

Bennett said Monday that if Netanyahu failed to secure a coalition he would work towards a "unity" government, as his top priority was averting a fifth election in less than three years.