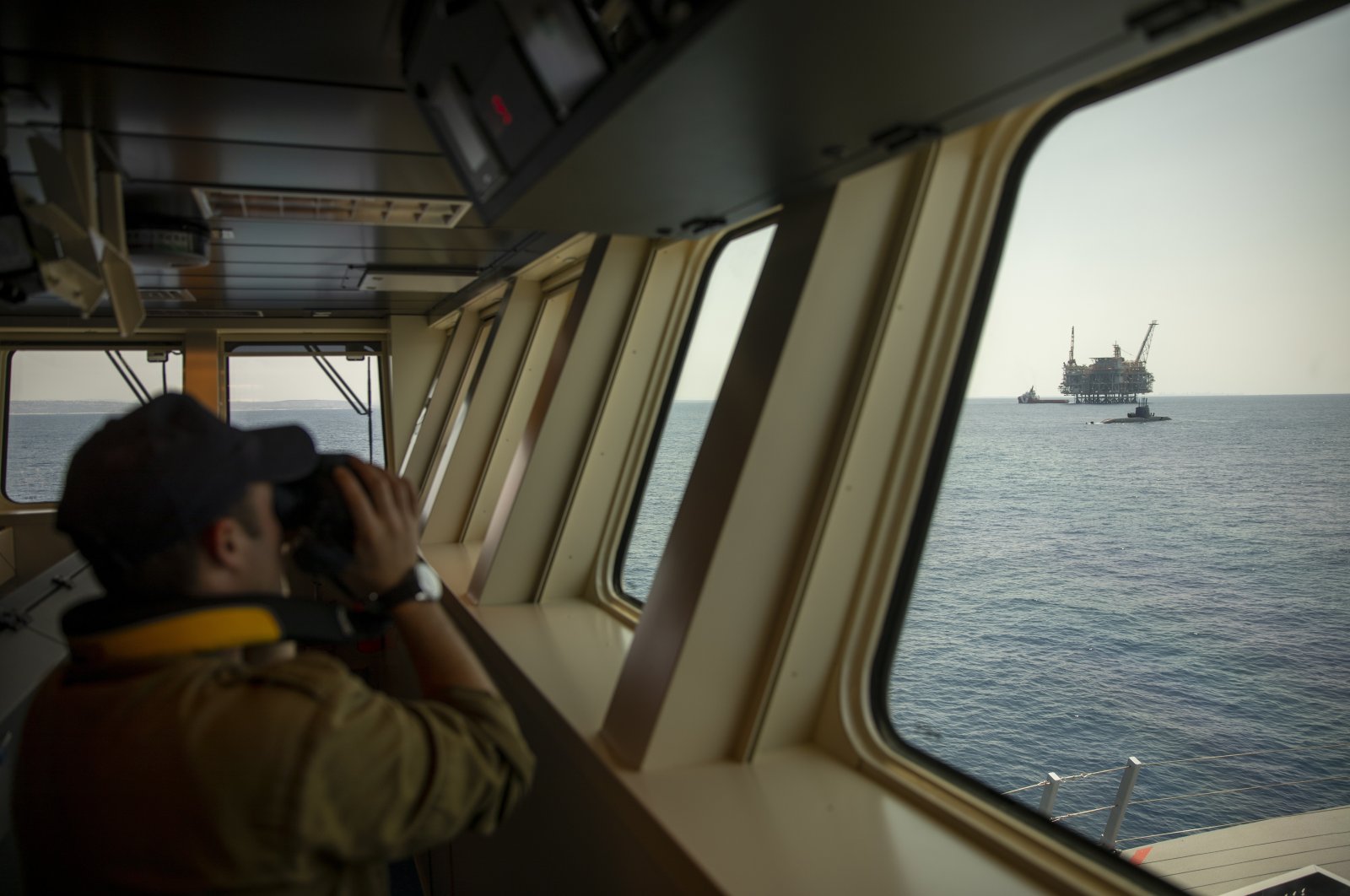 An Israeli Navy sailor looks at Israel's offshore Leviathan gas field from on board the Israeli Navy Ship Atzmaut as a submarine patrols in the Mediterranean Sea, Sept. 1, 2021. (AP Photo)
by ASSOCIATED PRESS Sep 16, 2021 10:45 am
RECOMMENDED

Israel has increased its activity in the Red Sea amid fears Iran may threaten Israeli shipping in the region, a recently retired navy commander said in an interview.

Vice Adm. Eli Sharvit stopped short of confirming a series of attacks and mishaps on Iranian ships that have been attributed to Israel. But he described Iranian activities on the high seas as a top Israeli concern and said the navy is able to strike wherever necessary to protect the country’s economic and security interests.

“The state of Israel will protect its freedom of navigation across the globe,” Sharvit told The Associated Press (AP), days after completing his five-year term. “That’s not related to distance from the country.”

Sharvit was a busy man during his tenure – overseeing a small but well-equipped force responsible for safeguarding Israel’s Mediterranean coast as well as the Red Sea, a vital gateway for imports from Asia.

While the Israeli navy has an overwhelming advantage over its enemies in the region, it nonetheless faces an array of threats. They include the Lebanese group Hezbollah, which possesses an arsenal of guided surface-to-sea missiles, and Gaza’s Hamas group, which has developed a small squad of naval commandos, as well as the challenges posed by Iran's military activity across the region.

One of the navy’s most important responsibilities is protecting Israel’s natural gas platforms in the Mediterranean Sea, which now provide some 75% of the country’s electricity.

To the north, Hezbollah has made no secret of its intentions to target those platforms if war breaks out. The Iranian-backed group successfully struck an Israeli naval vessel during a 2006 war, killing four soldiers, and is believed to have vastly upgraded its missile stockpile since then. Israel claims Iran continues to try to smuggle sophisticated weapons to Hezbollah.

Sharvit confirmed that Israel has intercepted many arms shipments to Hezbollah. “We are very vigilant concerning seaborne arms shipments, and every time that a shipment is one of arms, and not something else, we act,” he said.

With Lebanon’s economy in disarray, however, he said Israel has “no interest” in stopping fuel deliveries meant for civilian use.

Hamas frogmen managed to infiltrate an Israeli beach during a 2014 assault on Gaza before they were killed. Since then, the unit has been equipped with state-of-the-art equipment allowing them to travel underwater well up Israel’s coastline and making them much harder to detect, Sharvit said.

During a recent war in May, Israel says it thwarted an attempt by Hamas to launch a torpedo-like underwater drone at Israeli targets.

Israel has faced criticism over its naval blockade and crippling restrictions on Gaza. Israel says the blockade is needed to prevent a Hamas military buildup. But critics, including human rights groups and U.N. officials, say the policy amounts to collective punishment.

“Israel’s disproportionate and unreasonable restrictions on access to Gaza’s territorial waters as well as to vital items needed to repair fishing boats harm the livelihoods of thousands, put lives at risk and hinder economic development,” said Gisha, an Israeli rights group that has called for the blockade to be eased.

Sharvit, however, said it is difficult to separate the civilian and military spheres because Hamas uses the open waters to test rockets and train its navy commandos. “The sea is the biggest test site in Gaza,” he said.

But Israel’s biggest concern, by far, is archenemy Iran. Israel accuses Iran of trying to develop nuclear weapons, a charge Iran denies. It also cites Iran’s military presence in neighboring Syria and Iran’s support for groups like Hezbollah and Hamas.

In recent years, Israel and Iran have been engaged in a shadow war that has seen the killings of Iranian nuclear scientists, mysterious explosions at Iranian nuclear facilities and more recently a series of explosions on cargo ships with Iranian or Israeli connections. In most cases, no one has claimed responsibility.

Sharvit refused to discuss specific operations but said Israeli naval activity in the Red Sea has grown “exponentially” over the past three years.

Iran for years anchored a ship off Yemen that was believed to be a base for its paramilitary Revolutionary Guard. That ship, the MV Saviz, came under a suspected Israeli attack last April.

The Red Sea also has deep strategic significance by hosting key global shipping routes, including the Suez Canal and the Bab el-Mandeb Strait. Almost all of Israel’s imports enter by sea.

“We have increased our presence in the Red Sea most significantly,” Sharvit said. “We are operating there continuously with main ships, that is to say missile frigates and submarines. What in the past was for relatively short periods of time is now done continuously.”

He said that has not yet happened. The cargo ships believed to have been targeted by Iran in the Persian Gulf had Israeli connections but were owned and operated by businesses based elsewhere. He said such attacks merit an international response.

Yoel Guzansky, a senior fellow and Iran expert at the Institute for National Security Studies in Tel Aviv, described the navy as “good but small” and cautioned against relying too heavily on it in Israel’s overall Iran strategy.

“I think some operations may be an overstretch,” he said, adding that heightened tensions at sea could expose Israel’s vulnerabilities connected to its heavy reliance on global shipping.

“I would put my efforts elsewhere,” he said.