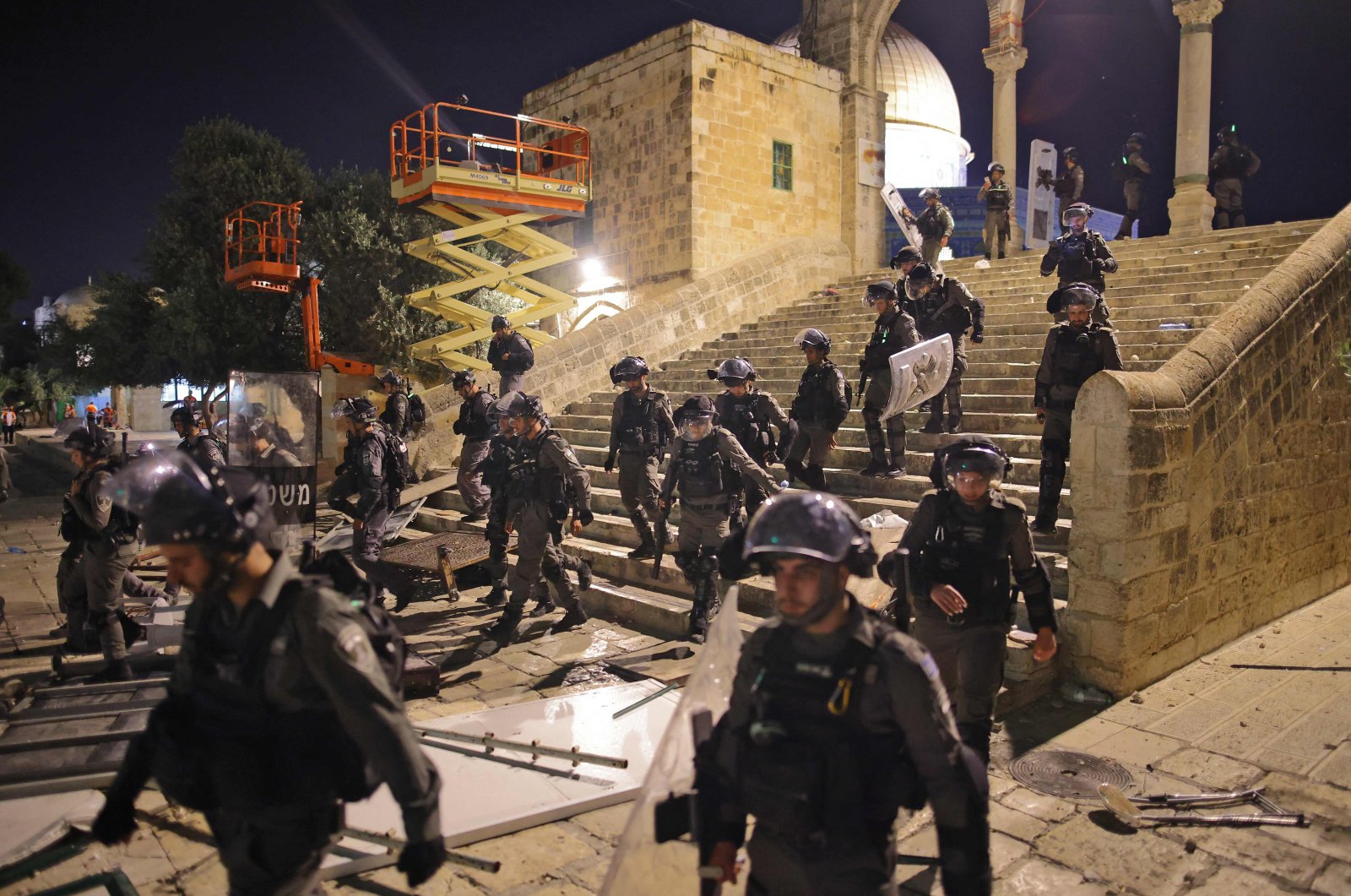 Israeli security forces deploy in Jerusalem's Al-Aqsa Mosque during their attack on worshippers at the mosque, East Jerusalem, occupied Palestine, May 10, 2021. (AFP Photo)
by Esra Öztürk May 11, 2021 1:04 am
RECOMMENDED

The Israeli police brutality at the Al-Aqsa Mosque was obviously a striking act for the whole Palestinian nation and all Muslims globally. Though it is the Palestinians who consider themselves guards of the holy mosque, the recent violence has already given signals of escalating tensions between the two sides. The latest unfortunate news came as Israel began airstrikes on the Gazans who reacted and stood up against the attack on the holy Al-Aqsa Mosque, also known as Masjid Al-Aqsa, and the tortured Palestinians, including women and the young. Several losses of life, including children, and dozens of injuries were reported from the Gazan Health Ministry.

There is no doubt that this chain of events started with the Sheikh Jarrah forced expulsions. The Palestinians tried to protect their houses and exercised their right to peaceful protest. The protests turned into crowded prayers in Al-Aqsa Mosque as the last days of Ramadan were reached. Yet, the Israeli forces attacked the gatherings and it ended up with an expected provocation – as it has become a regular occurrence for Israel to use hard force on the Palestinians during Ramadan.

I had the chance to interview a few Palestinians on this. I spoke to Jalal Abukhater, a Jerusalemite columnist who pens opinions for leading media outlets such as Al Jazeera and The Guardian, he also takes part in the Electronic Intifada. Lina Nowarah, who was part of the Organization of Islamic Cooperation Youth Forum (ICYF-DC) as a delegate of Palestine, shared her oral evidence with me. She also works for Palestinian International Cooperation Agency (PICA). I also noted the opinions of Dinah Jaber, a supporter of the #SaveSheikhJarrah campaign from Ramallah.

Aqsa provocation was a desperate attempt

Being an international relations expert, Abukhater views the Al-Aqsa oppression that left over 100 Palestinians injured and dozens detained as a revenge attempt by the Israeli administration regarding the protesters who raised their voices against their illegal settlement policy.

Though, Abukhater calls the attempt “desperate” saying, “I believe the Aqsa provocation was a desperate attempt by the Israeli police to show its strength in our face. But, in Jerusalem, we the Palestinian residents of the city, are stronger because we believe in our cause and are willing to do anything to protect our sacred sites.”

On Saturday night, which was the 27th of the holy month of Ramadan, almost 100,000 Muslim worshippers gathered in Al-Aqsa Mosque to commemorate the divine revelation of the first verse, thus the revealing of Muslims' holy book, the Quran. Undoubtedly, this scene did not please the Israeli forces.

According to Abukhater, Israel sustains a continuing policy of “ethnic cleansing” of the population, and the Palestinians have been evicted from their homes for decades for the same reason. The Sheikh Jarrah expulsions are not new, either.

Sheikh Jarrah expulsions are not new

Lina Nowarah reminds us that the expulsions of the Al-Ghawi family from their house in 2009 and says this case is not about the four families who are facing an expulsion today. Nowarah underlines that the illegal settlement plans have been made previously by the Israeli administration adding, “It is a matter of time.”

The recent popular video showing the Israeli settler saying, “If I do not steal your house, somebody else is going to steal it. I didn’t do this,” is the latest example of an extremist citizen profile that fully supports the government’s settlement policy. Nowarah outlined, “he is benefiting from staying in Al-Kurd's house because he is being paid money to live there. The Israeli government chooses the most extremist settlers to give them houses in Palestinian neighborhoods. The settler's answer was given in this way to change the true cruel image of the settlers who live there.”

Dinah Jaber underlines that since 1948 the establishment of the “illegal” state of Israel, slow but planned acts of expulsion are applied to Palestinian neighborhoods. Even though the Palestinians lose more land every day, Jaber is hopeful that there is widespread media coverage of these events that show how relentless Palestinians, particularly Jerusalemites are. "But the lack of actual international sanctions and actions that should be taken against Israel are missing. Condemning what’s happening is great but it means nothing without actions on the ground,” said Jaber.

Abukhater’s opinion gives light to the question of why, instead of only constructing houses for Israeli citizens, the administration systematically applies expulsion policy toward the Palestinians. “It is a continuation of Israel's violent policies of suppressing the Palestinian presence in the city. They keep demolishing our homes and displacing us, without giving us anywhere new to live within the city. This is exactly what is happening in Sheikh Jarrah, a continuation of ethnic cleansing because Israel wants to ensure it upholds its government policy of making Jerusalem supermajority Jewish,” he said.

Palestinians are in a rut, as the authority where they should ask for their rights are Israeli courts. The Jerusalemite Abukhater, the witness of several expulsions and legal processes points out that the Israeli state would never allow Palestinians to have a right of return to their land – the right of return only applies if you are Jewish.

He said: “When I speak to Jewish settlers, they keep saying ‘this is Jewish land, those families must leave.’ When I tell them that those Palestinians are refugees from 48 Palestine, like from Jaffa, for example, the settler would say 'let them deal with it ... Go back to Jaffa.'”

Being aware of the limited support, even from Muslim states, the Palestinians struggle against the daily routine of abuse from the Israeli forces on their own. A lot of footage shows the courage of the youth and even the children standing up against the Israeli armed forces.

According to Nowarah, the current situation has changed the perceptions of Jerusalem's youth. The inspiring thing is that activists started going individually to support Sheikh Jarrah and then it turned into groups, where social media campaigns helped in organizing the gathering of youth. “It is very important to highlight that all the gatherings and protests were peaceful, but the Israeli forces used violent methods to stop the protests. The protest activities were about gathering for breaking the fast in Ramadan and making the Maghrib and Ishaa prayers. The protests were peaceful,” she said.

In Jerusalem, several people were detained and were beaten up during the arrests. Lots of videos circulated showing people were being beaten on the street. The Palestinians are still fighting to protect their homes.

Along with the protests, a social media storm for Sheikh Jarrah collected hundreds of thousands of participants sharing #SaveSheikhJarrah. The campaign was created by two youths from Sheikh Jarrah, Muna Al-Kurd and her brother Mohammad Al-Kurd whose house was occupied by Jewish settlers. Nowarah informs that they created this hashtag to raise awareness of the area of Sheikh Jarrah as well as the importance of the issue.

Abukhater applauds the campaign as it managed to raise awareness and share factual information amongst large swathes of people who did not know anything about the matter before. “We are highlighting the modern-day Nakba in Jerusalem, by focusing on Sheikh Jarrah,” said Abukhater.

Despite social media censorship of the #SaveSheikhJarrah hashtag, the campaign quickly spread worldwide. It was given critical mass by Pink Floyd’s Roger Waters to tag the campaign releasing a video message and calling the expulsions “genocidal house clearings.” Announcing the incidents globally, several politicians, activists and other users from the United States tweeted on #SaveSheikhJarrah after Roger Waters.

U.S. Rep. Alexandria Ocasio-Cortex tweeted: “We stand in solidarity with the Palestinian residents of Sheikh Jarrah in East Jerusalem. Israeli forces are forcing families from their homes during Ramadan and inflicting violence. It is inhumane and the U.S. must show leadership in safeguarding the human rights of Palestinians.”

U.S. congressman Andre Carson shared a tweet saying: “I am extremely dismayed by Israel's efforts to forcefully evict Palestinians from their homes in #SheikhJarrah. The U.S. must show more leadership on the issue of Palestinian rights in the Holy Land, the West Bank and Gaza.”

Nowarah believes that their activity in social media will help them in pressuring the Israeli government to freeze the stealing process, and it will help the Palestinians gain more time in providing land ownership for the Palestinians in Jordan. “What is most important is to put a huge amount of pressure on Jordan to include the families in Sheikh Jarrah under the land ownership agreement of 1959, and to stop all the Israeli settlers’ trials in taking over the houses in Sheikh Jarrah,” outlined Nowarah.

The Palestinians believe the Israeli court postponed the hearing on the Sheikh Jarrah expulsions where the Israeli attorney general requested a new hearing within 30 days as a result of all the protests.