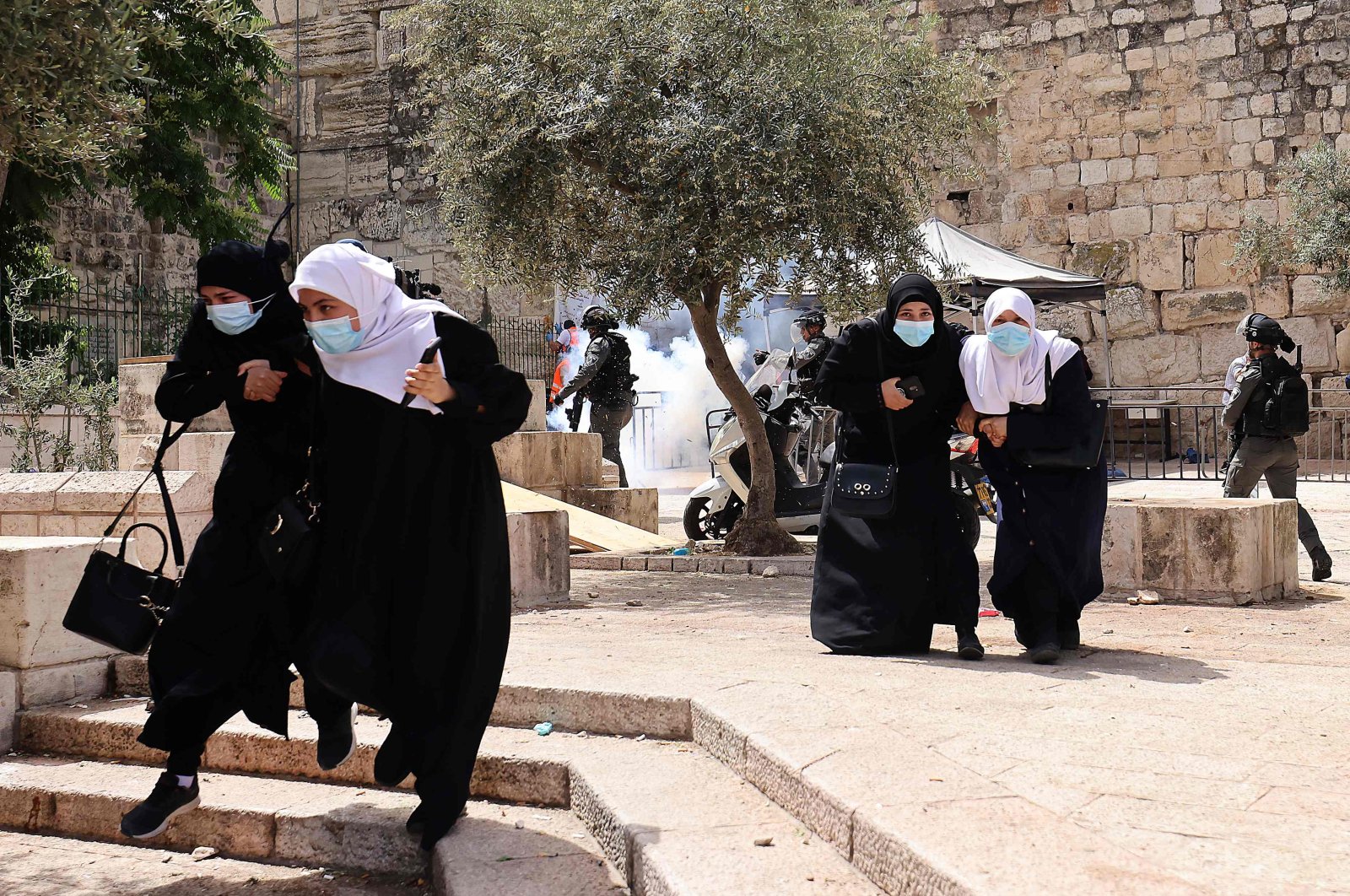 Palestinians run for cover from tear gas fired by Israeli security forces in Jerusalem's Old City on May 10, 2021. (AFP Photo)
by Agencies May 10, 2021 1:52 pm
RECOMMENDED

More countries, organizations and activists condemned Israel for attacking worshippers in Al-Aqsa mosque in occupied East Jerusalem and its evictions of Palestinians from their homes on land claimed by Jewish settlers.

Indonesian President Joko Widodo on Monday emphasized that the expulsion of Palestinian civilians from their homes and the use of force against them at the Al-Aqsa Mosque must not be ignored.

"Indonesia condemns such acts and urges the UN Security Council to take measures on the repeated violations carried out by Israel," Widodo posted on Twitter.

Widodo added Indonesia will continue to stand with the people of Palestine.

Bakir Izetbegovic, the president of Bosnia's Party of Democratic Action, stressed that all forms of discrimination and violence based on religious, ethnic and ideological differences must be called out. "Like all people in the world, Palestinians should live in safety," he said in a statement.

"The bloodshed in the holy month of Ramadan, the removal of Palestinians from their homes is an attack on civilizational values," he added.

Scottish First Minister Nicola Sturgeon on Saturday also condemned the Israeli violence in a statement on Twitter, calling on the Israeli government to listen to the international community's calls and cease its attacks on Islam's third holiest site as well as its illegal evictions of Palestinian residents in the occupied neighborhood of Sheikh Jarrah.

"Attacking a place of worship at any time is reprehensible, but attacking a mosque during Ramadan is utterly indefensible," Sturgeon said.

"It is also a violation of international law. Israel should heed calls to halt the violence immediately," the first minister added, using the hashtag #SheikhJarrah that has been trending on Twitter in the past week.

The Independent Permanent Human Rights Commission, which is part of the Organisation of Islamic Cooperation (OIC), said in a statement released Sunday that Israel's recent illegal measures amount to "war crimes" under international humanitarian law, and those committing the "ruthless violations" in East Jerusalem must be prosecuted.

The commission condemned Israel's illegal and brutal use of force against protesting Palestinians, saying it is "appalled by the brutality."

It also noted that attacking Muslims during the holy month of Ramadan was a serious violation of their right to freedom of religion.

"It is simply inhuman to attack the innocent unarmed worshippers with water cannons, stun grenades and rubber-coated bullets," the statement said.

Concerning the illegal and forced eviction of Palestinians from their homes by the Israeli police, the commission "strongly condemned" the expansionist policy of the occupying forces of Israel and urged the country "to immediately halt these forced evictions."

"East Jerusalem is an integral part of the Occupied Palestinian Territory, no part of which can be confiscated by the Occupying Power by any coercive measures," the statement said.

It further said that the commission called on the U.N. Security Council, the Quartet – the European Union, Russia, the U.N. and the U.S. – as well as the international community "to force Israel to desist from these inhuman brutalities."

Emphasizing that concrete actions must be taken for a comprehensive and just solution of the dispute in accordance with relevant U.N. resolutions, the commission pointed out that Palestinians needed free access to holy sites, including Al-Aqsa Mosque.

The statement also indicated that recognizing Palestinians' right to self-determination for establishing an "independent, viable and continuous state" and to return their homes and property were the core integrals of the solution.

Nobel Peace Prize laureate and Yemeni activist Tawakkol Karman said on Monday that the latest Israeli violations have "added to the many [Israeli] crimes against the Palestinian people". She also lambasted what she described as "embarrassing and regrettable international silence."

"I condemn the Israeli occupation forces storming the Al-Aqsa Mosque and wounding hundreds of worshippers," Karman said in a Twitter post.

Human right organization Amnesty International also called on Israel to "Stop violence in occupied East Jerusalem. @amnesty's been on the ground & witnessed Israeli forces use of excessive force against protesters and bystanders. #Israel must end use of unlawful force & forced evictions of Palestinians. Int'l community must hold Israel accountable," the organization said on Twitter.