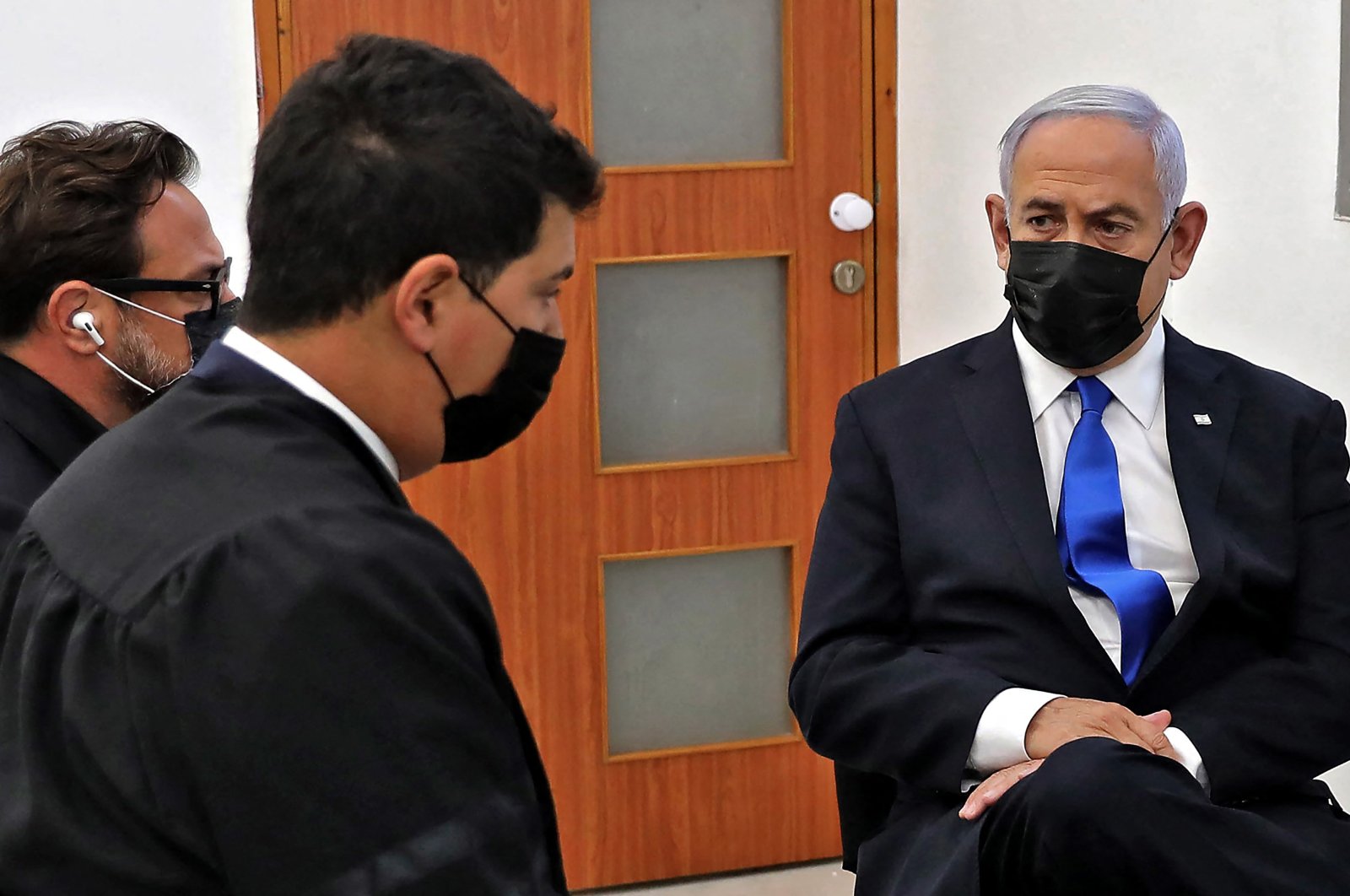 Israeli Prime Minister Benjamin Netanyahu accused prosecutors in his corruption trial of trying to oust him and called the case a "coup attempt" as he appeared in court on Monday facing allegations of accepting gifts from wealthy friends.

In a nationally televised statement, Netanyahu said the case against him is threatening to undermine the will of the country's voters.

"This is what a coup attempt looks like,” he said. Netanyahu spoke shortly after his corruption trial resumed and with the country's president holding post-election consultations on choosing the next prime minister designate.

His corruption trial resumed Monday, with a key witness painting a picture of an image-obsessed Israeli leader forcing a prominent news site to flatter his family and smear his opponents.

The testimony came as Netanyahu’s chances of securing another term in office following last month’s parliamentary elections appeared to be dwindling in high-stakes political talks hosted by the country’s figurehead president just a few miles (kilometers) away. Taken together, the court testimony and political consultations pointed to an increasingly uphill struggle for Netanyahu as he fights for his political life.

Monday’s proceedings, the first in two months, marked the beginning of the evidentiary phase, in which a long line of witnesses are to take the stand against the prime minister.

The session focused on the most serious case against Netanyahu – in which he is accused of promoting regulations that delivered hundreds of millions of dollars of profits to the Bezeq telecom company in exchange for positive coverage on the firm’s popular news site, Walla.

Ilan Yeshua, Walla’s former chief editor, described a system in which Bezeq’s owners, Shaul and Iris Elovitch, repeatedly pressured him to publish favorable things about Netanyahu and smear the prime minister's rivals. The explanation he was given by the couple.

"That’s what the prime minister wanted,” he said.

He said the pressure went on "for hours on end” over several years. The Elotviches, who are also defendants in the case, chose photos, headlines, word choice and other content.

Yeshua said they also ordered him to write unfavorable articles about Netanyahu’s rivals, giving them pejorative nicknames. Naftali Bennett, a former Netanyahu ally turned rival, was known as "the naughty religious one,” and former Finance Minister Moshe Kahlon, who is of North African descent, was called "smiley” and "the Arab.” Yeshua said he never spoke directly to Netanyahu, and that requests also came from intermediaries, including former Netanyahu aide Nir Hefetz, who has turned state’s witness and is also expected to testify against the prime minister.

"It was clear that I needed to comply with Nir’s requests to put up positive articles, and remove negative ones,” Yeshua said. He said his staff was furious about the pressure and one editor even nicknamed the prime minister "Kim,” after the North Korean dictator Kim Jong Un. He said Shaul Elovitch referred to Netanyahu as "the big guy,” and would also show him text messages from the prime minister’s son, Yair, asking for articles to be changed or taken down.

At one point in the proceedings, Iris Elovitch screamed out: "How much can you lie?” In another case, Netanyahu is accused of accepting gifts worth hundreds of thousands of dollars from wealthy associates, including Hollywood film mogul Arnon Milchan and Australian billionaire James Packer. In the third case, Netanyahu is accused of trying to orchestrate positive coverage in a major Israeli newspaper in exchange for curbing distribution of a free pro-Netanyahu tabloid. Netanyahu denies all charges.

At the beginning of Monday's session, Netanyahu sat with his lawyers as lead prosecutor Liat Ben-Ari read out the charges against him.

"The relationship between Netanyahu and the defendants became currency, something that could be traded,” she said. "The currency could distort a public servant’s judgment.” He then left the courthouse before Yeshua’s testimony.

Outside the courtroom, dozens of supporters and opponents of the prime minister gathered to protest amid a heavy police presence, highlighting Israel’s deep divisions. While a decision in the trial could be months or even years away, the proceedings are expected to take place up to three days a week, an embarrassing and time-consuming distraction that is certain to amplify calls for Netanyahu to step aside.

The March 23 election was seen as a referendum on Netanyahu’s leadership, with his opponents saying a politician on trial for serious charges is unfit to rule.

The election, Israel’s fourth in two years, ended in a deadlock. Netanyahu is desperate to stay in power, hoping to use his office as a bully pulpit to lash out against prosecutors and potentially forming a government that could grant him immunity. But that scenario was looking increasingly distant Monday.

Neither Netanyahu’s allies nor his foes secured a governing majority. His fate could come down to Bennett, leader of the right-wing Yamina party, and Mansour Abbas, the leader of a small Arab Islamist party who also has yet to commit to either the pro- or anti-Netanyahu blocs.

On Monday, Bennett recommended himself as the next prime minister, deepening Israel’s political deadlock and severely narrowing Netanyahu's path to reelection. But Netanyahu’s main challenger, the centrist Yair Lapid, was also struggling to win majority support. Yamina has just seven seats in parliament, making it a long shot to be able to form a governing coalition.

Bennett is hoping he can become a consensus candidate who can bridge the deep divides between the rival factions. Israeli President Reuven Rivlin will soon choose a prime minister-designate who would be given up to six weeks to form a coalition.

If he feels there is no clear choice, he also could send the issue straight to the Knesset, ordering lawmakers to choose a member as prime minister or force another election. Israeli law does not require prime ministers to resign while under indictment, and Netanyahu has refused to do so.

Some of Netanyahu’s opponents have talked about passing legislation that would bar an indicted politician from serving as prime minister in order to disqualify him ahead of another election.