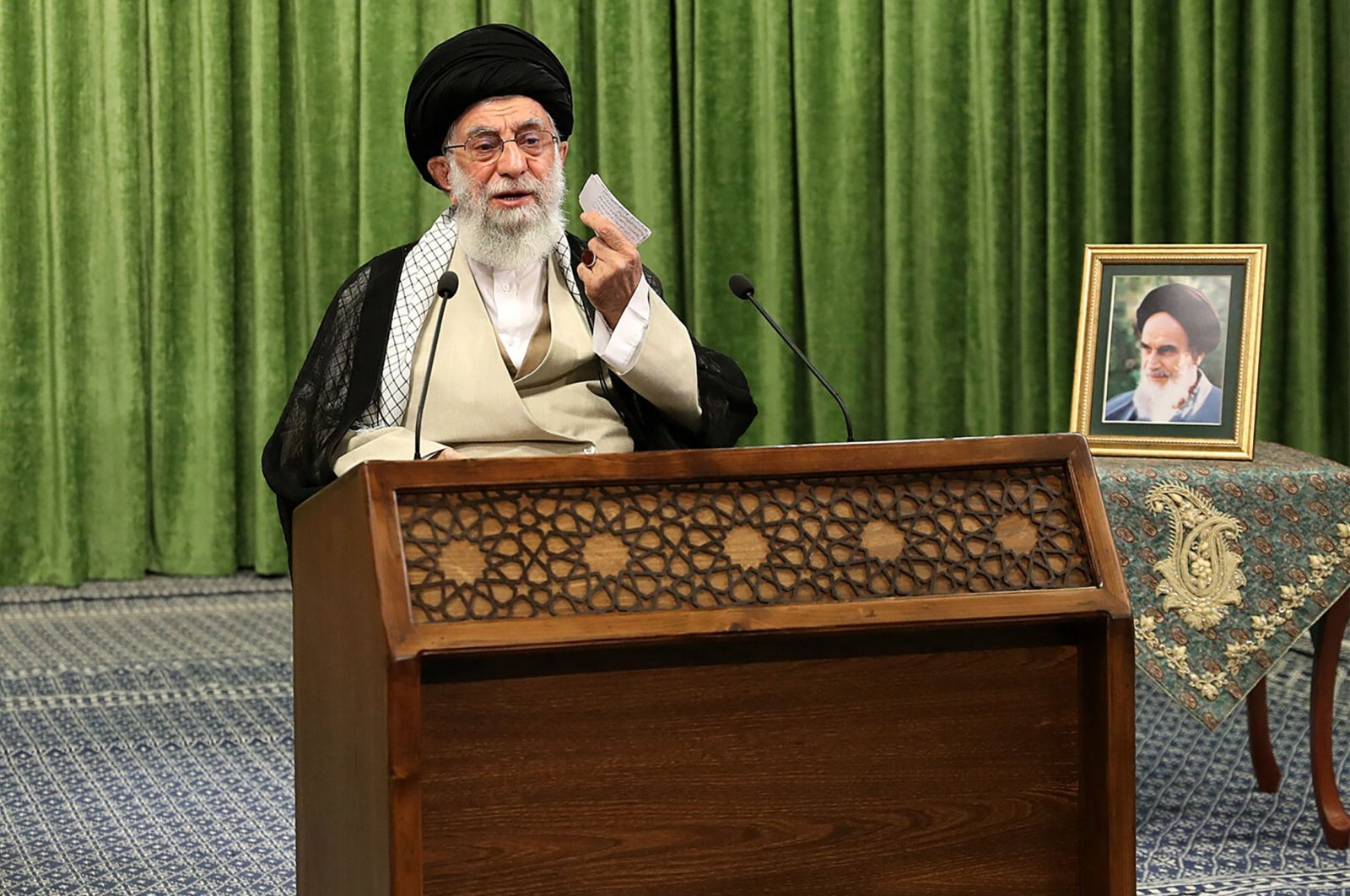 Iranian Supreme Leader Ayatollah Ali Khamenei addressing parliament members during an online meeting, with a picture of his predecessor, the late Ayatollah Ruhollah Khomeini next to him, Tehran, Iran, May 27, 2021. (Khamenei.ir handout via AFP)
by French Press Agency - AFP May 27, 2021 4:23 pm
RECOMMENDED

Iranians are set to elect a successor to President Hassan Rouhani June 18, amid widespread discontent over a deep economic and social crisis and after the violent repression of waves of protests in the winter of 2017-2018 and in 2019.

The exiled opposition has for months run a campaign on social media networks calling on Iranians to stay away from the polls, using hashtags in Persian and English such as #NototheIslamicRepublic.

"Do not pay attention to those who are campaigning and saying it is useless to go to the polls and that one should not go to the polls," Khamenei told lawmakers in a speech via videoconference, according to his official Instagram account.

Khamenei's remarks appear to suggest that he does not intend to intervene and reverse the disqualification of any candidates, as he did in 2005. His declaration comes a day after Rouhani said he had asked the supreme leader to intervene to ensure greater "competition" in the presidential election.

Iran's candidate-vetting Guardian Council Tuesday approved seven mainly ultraconservative hopefuls to run in the election from a field of about 600 hopefuls.

Its decision appeared to clear the way for a strong run by ultraconservative judiciary chief Ebrahim Raisi, but it is also expected to see an increase in voter abstention. Rouhani is constitutionally barred from running for a third consecutive term.

A record 57% of Iranians stayed away from legislative elections in February last year after thousands of candidates, many of them moderates and reformists, were disqualified. The poll comes at a critical time amid talks with world powers aimed at reviving a 2015 nuclear deal that offered sanctions relief in return for Iran's agreement to tighten controls on its nuclear program.

The accord has been on life support since then-United States President Donald Trump unilaterally withdrew from it in 2018 and imposed crippling sanctions on the Islamic republic. Iran, which retaliated to the U.S. move by rolling back its nuclear commitments, is seeking the lifting of the sanctions.

Larijani was seen as the only person capable of challenging Raisi, who is now considered the "unrivaled candidate," according to the reformist newspaper Etemad. Raisi won 38% of the vote in the 2017 presidential election but was defeated by Rouhani. The judiciary chief says the priority is to secure the lifting of U.S. sanctions – implying that, if he wins, he will keep Iran in the nuclear agreement.