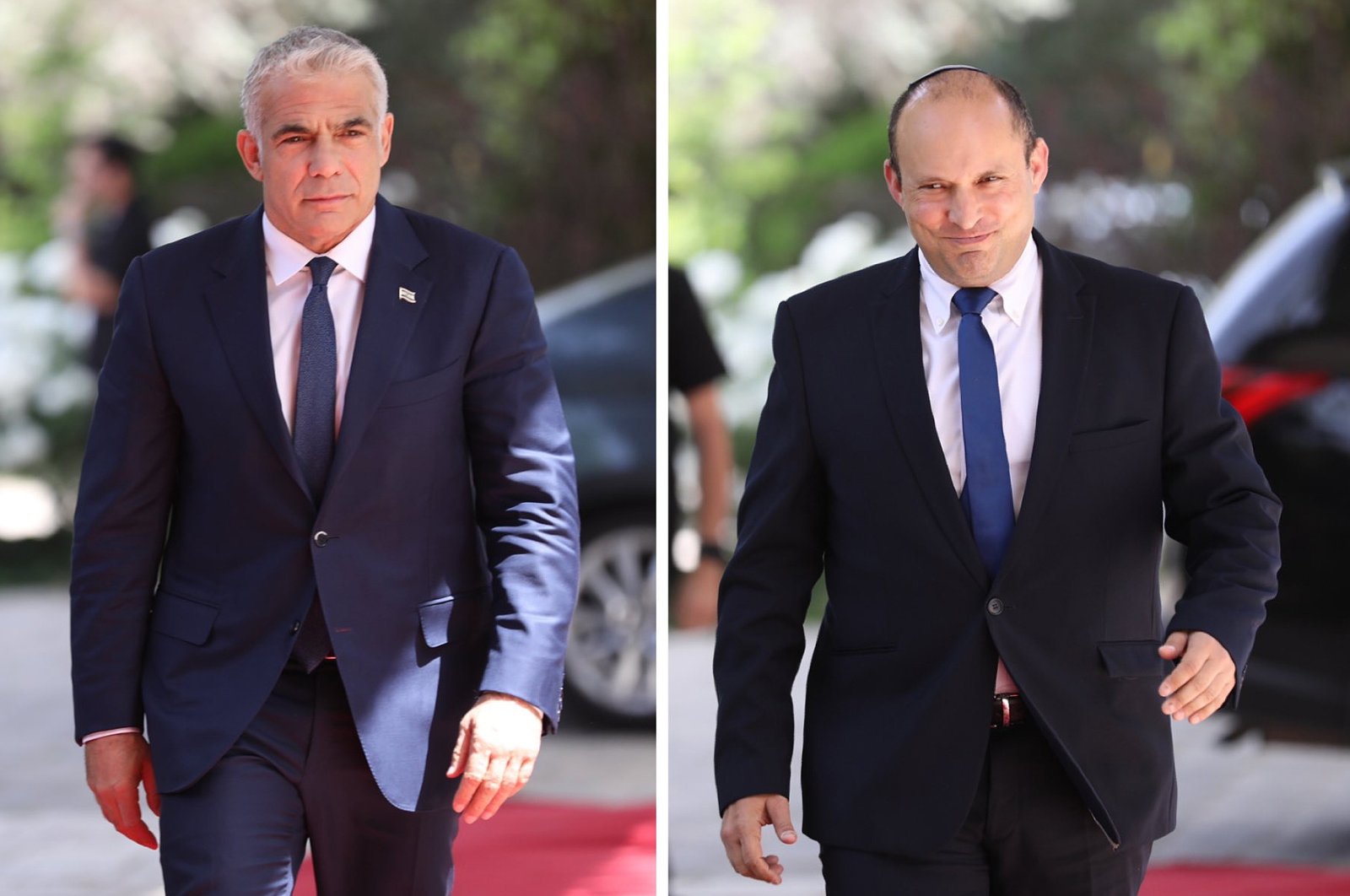 A combination photograph shows the leader of the Yamina party, Naftali Bennett (R) and leader of the Yesh Atid party, Yair Lapid, both entering the residence of President Rivlin, in Jerusalem, Israel, May 5, 2021. (EPA-EFE Photo)
by DAILY SABAH WITH AGENCIES
May 31, 2021 12:24 pm

Israeli Prime Minister Benjamin Netanyahu's grip on power loosens as leaders of a far-right and centrist party prepare to form a governing coalition in Israel, which would unseat the long-term leader and his center-right Likud for the first time since 2009

A new coalition comprised of a far-right and a centrist party which would unseat Prime Minister Benjamin Netanyahu and his center-right Likud is taking shape in Israel.

Israeli far-right politician Naftali Bennett of the pro-settler Yamina party which has six key seats in parliament said on Sunday that he would do everything possible to forge an alliance with Future Party leader Yair Lapid. Their proposed governing coalition would put Netanyahu and his Likud party out of government.

According to media reports, the top job at the helm of government is set to rotate. First, former Defense Secretary Bennett would be prime minister for two years, then it would be Lapid's turn. Bennett said he is making the move after it became apparent that he could not form a right-wing coalition without outside support. The only alternatives are to make Israel endure a fifth election since 2019 or to form the coalition with Lapid's party. Bennett said he would do anything to make the deal happen.

“It’s my intention to do my utmost in order to form a national unity government along with my friend Yair Lapid, so that, God willing, together we can save the country from a tailspin and return Israel to its course,” Bennett said on Sunday after meeting with his own party, Yamina. "The political crisis in Israel is without example worldwide," said Bennett, accusing Netanyahu of dangerously divisive politicking.

If the plan succeeds, it would bring an end to the era of Netanyahu, who has been in office since 2009. He was also prime minister from 1996 to 1999 and has been in the office longer than any other person in Israeli history.

Netanyahu quickly lashed out at Bennett's announcement, arguing that Bennett would be breaking a campaign promise in which he stated he would not enter into a coalition with Lapid. Netanyahu warned of a "dangerous leftist government" and called for the creation of a "proper right-wing government," according to remarks carried by Deutsche Presse-Agentur (DPA).

Bennett, a former Netanyahu aide and now his rival, asserted that there was no real way for the right-wing to form a ruling majority in parliament.

“A government like this will succeed only if we work together as a group,” Bennett said, adding that everyone “will need to postpone fulfilling all their dreams. We will focus on what can be done, instead of fighting all day on what’s impossible.”

Lapid's centrist party came in second in the elections on March 23, behind Netanyahu's right-wing Likud. After the March elections, Netanyahu had failed to form a government, so President Reuven Rivlin appointed Lapid to do so. Lapid's pro-reform party planned to continue coalition talks Sunday with Gideon Saar's right-leaning New Hope. It has already reached agreements with the left-liberal Meretz Party, the Labour Party and former Foreign Minister Avigdor Lieberman's nationalist Yisrael Beitenu party.

Lapid is trying to ensure the support of several small parties that are far apart on the political spectrum, in order to form a minority government that would be acceptable to Arab deputies. They are united above all by their rejection of Netanyahu, who is currently being tried for corruption. However, the smaller parties have widely diverging political goals. Lapid's mandate to form a government runs out on Wednesday at midnight. After officially announcing the alliance, Lapid would next have to inform Rivlin. He would then have seven days to swear in the government in parliament, requiring a simple majority of the 120 lawmakers in the Knesset.

An alliance against Netanyahu will require external support from Palestinian-Israeli lawmakers who oppose much of Bennett's agenda, which includes further expansion of settlements in the occupied West Bank, as well as its partial annexation. It is expected that new power will focus on economic recovery from the COVID-19 pandemic, leaving aside issues on which members cannot agree, such as the role of religion in society and Palestinian aspirations for statehood.

Netanyahu said such a coalition poses a threat to Israel's security and future. “What will it do for Israel’s deterrence? How will we look in the eyes of our enemies,” he said. “What will they do in Iran and in Gaza? What will they say in the halls of government in Washington?”

An agreement between Bennett and Lapid was reported to be close when violence broke out between Israel and Hamas on May 10, and Bennett suspended discussions. After 11 days of Israeli air strikes which killed more than 250 people, including 66 children and wounded almost 2,000 people, a cease-fire deal was been reached with Egypt's mediation. Tel Aviv's offensive campaign started after police raids around the Al-Aqsa Mosque compound in East Jerusalem and plans to evict Palestinians from the Sheikh Jarrah district of the city to make way for Jewish settlers.

The fighting with Hamas that ended with a May 21 truce, as well as violence in the occupied West Bank and in mixed Jewish-Arab towns in Israel, initially appeared to leave Netanyahu more likely to hold onto power. But political scientist Gayil Talshir at Hebrew University told Agence France-Presse (AFP) on Sunday that Israel was now "closer than ever" to a coalition of change, adding: "Netanyahu is in a desperate position." According to Reuters after Bennett’s speech, a Palestine Liberation Organization (PLO) official said that the prospective government would be “extreme rightist” and no different than the administrations headed by Netanyahu.

Netanyahu had already been fighting back before Bennett's announcement, offering Bennett and Saar a coalition in which the three would each have a period holding the office of prime minister. Netanyahu spoke of a "fateful moment for the security, character and future of the state of Israel," in a video posted on Twitter. He urged Bennett and Saar to join him in "preventing a dangerous leftist government."

Saar, who would be the first to become head of government, rejected the proposal as "spin."

The coalition agreements would require a difficult balancing act on issues such as the two-state solution with Palestinians, political analyst Tal Schneider told journalists in a telephone conversation Sunday. She said she saw Netanyahu as an active opposition leader once he is replaced. "He probably thinks this government will collapse very quickly," Schneider said, adding that if that should come to pass, Netanyahu would count on winning a new election. "He's probably planning to hold a fifth election fairly soon," she said.