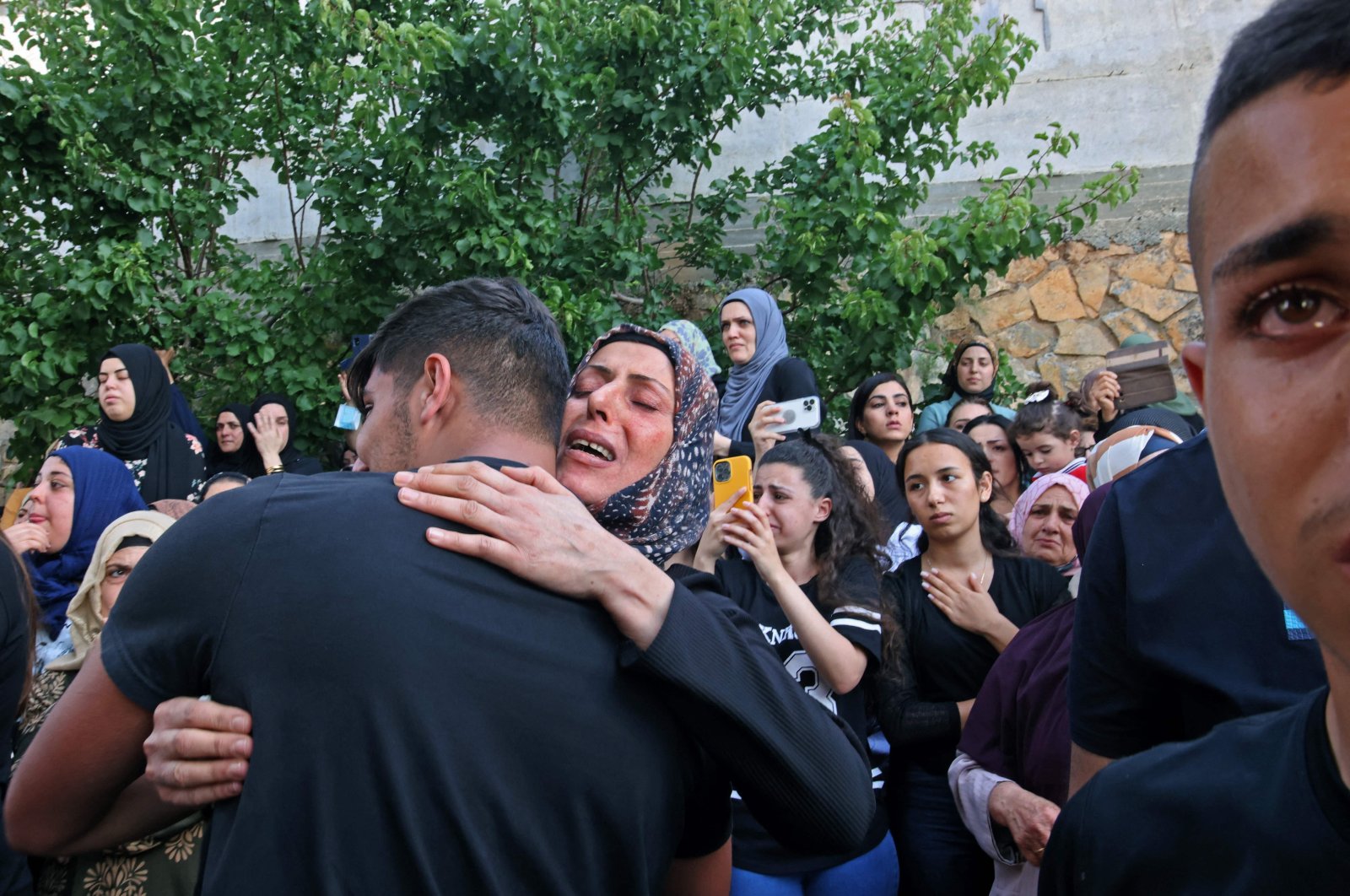 Mourners react during the funeral of Mohammad Kiwan, a 17-year-old Palestinian who succumbed to his wounds after being shot by Israeli forces, in Umm al-Fahm, northern Israel, May 20, 2021. (AFP Photo)
by French Press Agency - AFP May 27, 2021 9:14 am
RECOMMENDED

Israel's recent barrage of deadly airstrikes on Gaza might be war crimes, the United Nations rights chief said Thursday, adding she had seen no evidence the attacked buildings were used for military purposes.

Addressing a special session of the United Nations Human Rights Council, Michelle Bachelet voiced deep concern about the surge in deadly violence between Israelis and Palestinians earlier this month.

"Although Israel undertook a number of precautions, such as advance warning of attacks in some cases, airstrikes in such densely populated areas resulted in a high level of civilian fatalities and injuries, as well as the widespread destruction of civilian infrastructure," the U.N. High Commissioner for Human Rights said. "If found to be indiscriminate and disproportionate in their impact on civilians and civilian objects, such attacks may constitute war crimes."

Bachelet urged Israel to ensure accountability, as required under international law in such cases, including through "impartial, independent investigations" of actions in the escalation. She cautioned that unless the "root causes” of the violence are addressed, "it will certainly be a matter of time until the next round of violence commences with further pain and suffering for civilians on all sides." The day-long debate involved personal accounts from Palestinians - such as that of a young woman journalist from the Sheikh Jarrah neighborhood in east Jerusalem, an early flashpoint that triggered the violence - as well as statements from the council’s 47 member states and also observer states.

The U.N. Human Rights Council discussed Thursday launching an international investigation into rights violations during Israel's latest assault on the Gaza Strip and "systematic" abuses in Palestine and Israel. The proposal before the U.N. Human Rights Council called for an unprecedented level of scrutiny on abuses and their "root causes" in the decadeslong Middle Eastern conflict.

The draft resolution presented by the Organisation of Islamic Cooperation (OIC) was expected to be debated during a special one-day council session focused on the surge in deadly Israeli violence against Palestinians this month. The session of the 47-member council, called for by Pakistan on behalf of the OIC and the Palestinian Authority, kicked off at 8 a.m. GMT with a statement by Bachelet.

Palestinian Foreign Minister Riyad al-Maliki is among those expected to address the session, as is Meirav Eilon Shahar, Israel's ambassador to the U.N. in Geneva. On Wednesday, Shahar attacked both the session and the draft resolution.

The text, expected to be voted on Thursday afternoon, calls for the council to "urgently establish an ongoing independent, international commission of inquiry ... in occupied Palestinian Territory, including East Jerusalem and in Israel."

The investigators, the text said, should probe "all alleged violations and abuses" of international law linked to the tensions that sparked the latest violence.

Before a truce took hold last Friday, Israeli airstrikes and artillery fire on Gaza killed 253 Palestinians, including 66 children, and wounded more than 1,900 people in 11 days of Israeli violence from May 10, the Gazan Health Ministry said.

Retaliatory rockets from Gaza claimed 12 lives in Israel. Some 357 people in Israel were wounded.

But the draft text goes far beyond the most recent assault on Gaza, also calling for investigators to probe "underlying root causes of recurrent tensions and instability, including systematic discrimination and repression based on group identity."

The investigation should focus on establishing facts and gather evidence and other material that could be used in legal proceedings, and as far as possible should identify perpetrators to ensure they are held accountable, it said.

"Long-standing and systemic impunity for international law violations has thwarted justice, created a protection crisis and undermined all efforts to achieve a just and peaceful solution," the draft text said.

If the resolution passes, it would create the council's first-ever open-ended commission of inquiry (COI) – the highest-level investigation that can be ordered by the council.

Other COIs, such as the one on Syria, need their mandates renewed every year.

And while the council has previously ordered eight investigations into rights violations committed in the Palestinian territories, this would be the first one with a mandate to examine "root causes" in the drawn-out conflict, and also to probe systematic abuses committed within Israel.

Khalil Hashmi, Pakistan's ambassador to the U.N. in Geneva, told reporters Wednesday that the recent violence was only the latest in a long cycle, and stressed the need for the investigation to have "standing status."

Twenty of the council's 47 members were among the 66 countries that backed holding the special session.

The rights council holds three regular sessions each year but can hold special sessions with the backing of at least a third of members.

Thursday will mark the 30th extraordinary meeting since the council's creation 15 years ago.

It will be the ninth focused on Israel, which has long complained it faces bias in the council. Shahar argued that this latest special session marked a "further tarnishing (of) the moral values it is supposed to uphold."