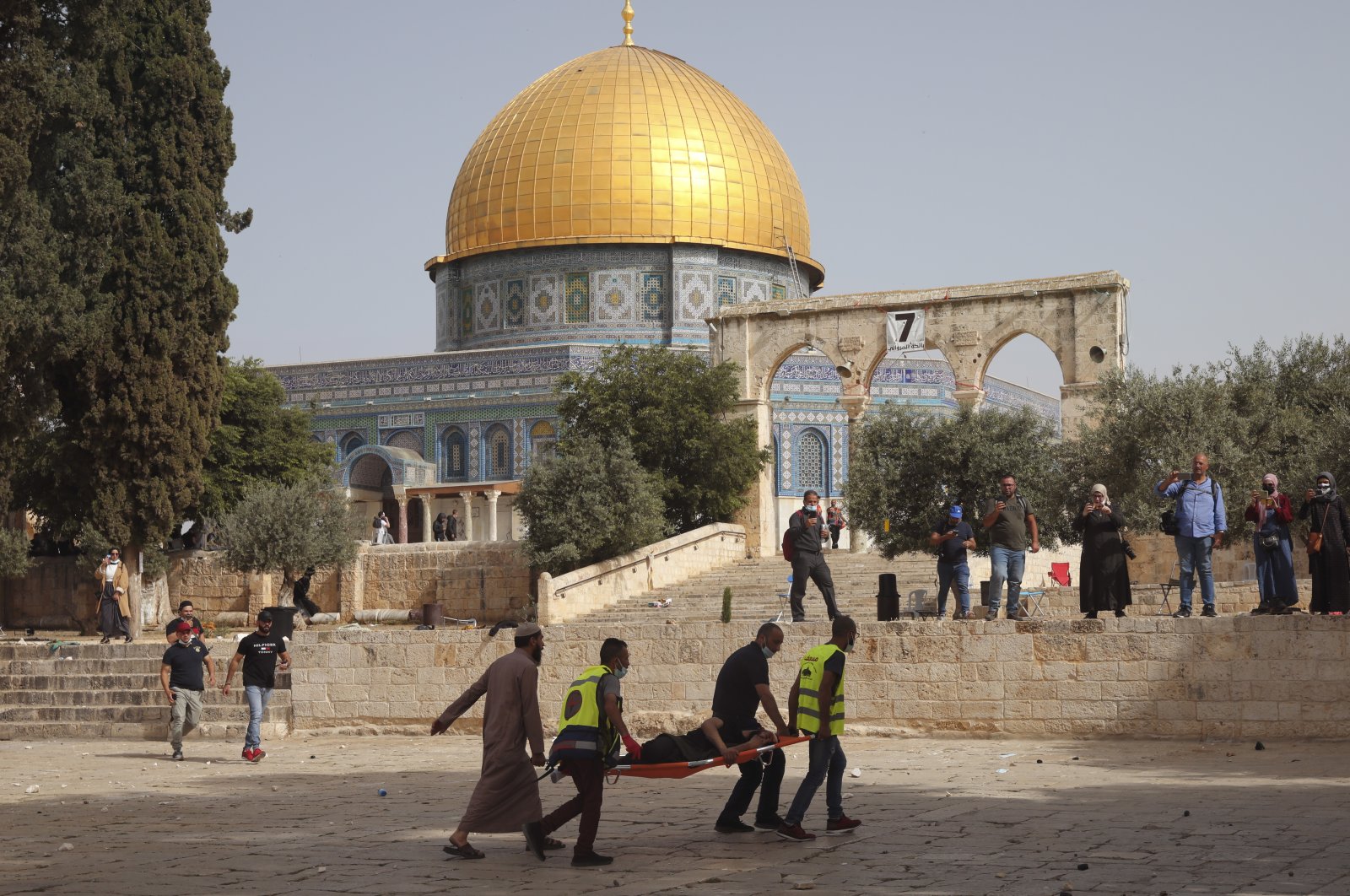 Palestinians evacuate a man wounded by Israeli forces in front of the Dome of the Rock Mosque at the Al Aqsa Mosque compound in Jerusalem's Old City, May 10, 2021. (AP Photo)
by French Press Agency - AFP May 12, 2021 3:58 pm
RECOMMENDED

With accounts deleted on Twitter and content blocked on Instagram, Palestinian social media users say they have been censored from showing the reality of the unrest in Jerusalem.

The eastern part of the holy city has been hit with the worst violence since 2017, with clashes centered around the Al-Aqsa Mosque, the third holiest site in Islam, since Friday.

The tensions escalated when Israel launched devastating airstrikes on Gaza, including on civilian targets, while Palestinian groups responded by firing rockets into Israel.

The tensions, which the United Nations has warned is heading towards "a full-scale war," were triggered by the looming removal of Palestinian families from their homes to make way for Israeli settlers in the Jerusalem neighborhood of Sheikh Jarrah.

On social media, Palestinians have widely shared photos and videos of Israeli forces facing off with residents, in what Amnesty International has denounced as an "illegal and abusive use of force" against "largely peaceful" protesters.

Social media remains an important tool for Palestinians, many of whom believe traditional media coverage does not sufficiently capture the reality of the crisis.

Sada Social, a platform designed to protect content shared by Palestinians online, recorded 200 restrictions in the past week on matters related to Sheikh Jarrah and East Jerusalem.

A spokesperson for Twitter said it was reversing action against accounts that were targeted "in error by an automated spam filter."

"Defending and respecting the voices of the people who use our service is one of our core values at Twitter," said the statement sent to Agence Frace-Presse (AFP).

"We use a combination of technology and human review to enforce the Twitter Rules across the service. In this case, our automated systems took enforcement action on a number of accounts in error."

Instagram meanwhile blamed a "technical bug which impacted millions of people's stories, highlights and archives globally" including Palestinians who saw their content "disappear."

Likewise, the Arabic hashtag Al-Aqsa was "mistakenly restricted" in an action that has since been "lifted," said a spokesperson for Facebook, which owns the platform.

"We sincerely apologize for both issues, and to all those, including our Palestinian community, who felt like their ability to have an open discussion around important matters was affected in any way."

"On Friday evening, during the Israeli assault on worshippers at Al-Aqsa Mosque, Facebook restricted the 'Al-Aqsa' hashtag and the streaming of live videos on Instagram was disrupted or blocked for many users," Fatafta said.

She added that Twitter also suspended dozens of accounts, including that of Palestinian journalist Mariam Barghouti, "as she covered a violent Israeli crackdown on protesters near Ramallah" in the occupied West Bank.

"These arbitrary 'technical errors' tend to happen in peak times when activists are sharing information and documenting Israeli aggression," said Fatafta, who called for transparency and an investigation.

Rifai, from Sada Social, accused the Israeli government of having forged partnerships with major social networks to "crack down on Palestinian digital content," but said this is the first time that restrictions have become widespread.

"It is a very serious situation which prevents us, as Palestinians, from enjoying our digital rights like other users of these sites around the world," he told AFP.

Rifai said that some deleted accounts have been restored on Twitter, but that the process is "still ongoing."

In a statement released on Sunday, Instagram said that the same restrictions had affected content related to protests in Colombia and the rights of indigenous communities in Canada and the United States.

The social network said it has solved the problem but Hind Khoudary, a Palestinian journalist with more than 18,000 followers on Instagram, said she is "still censored."

"I have lost stories. And my stories on Instagram cannot be seen," she told AFP.