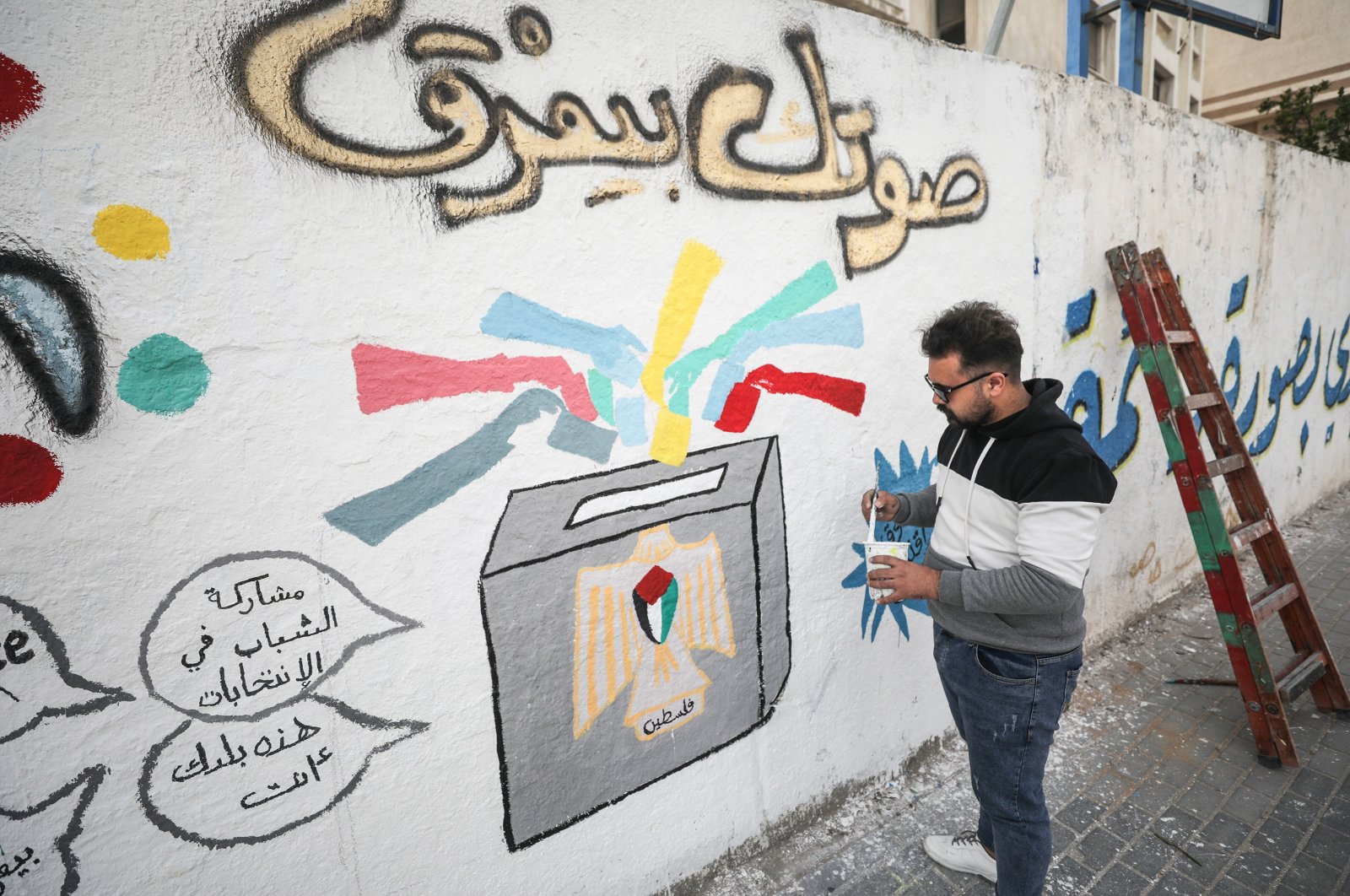 A Palestinian artist paints graffiti on a wall in the Gaza Strip to draw attention to the importance of voting in the Palestinian Legislative Council elections scheduled for May 22, Gaza, Palestine, March 24, 2021. (AA Photo)
by Agencies Mar 25, 2021 3:27 pm
RECOMMENDED

As weary Israelis count votes from yet another tight election, Palestinians are beginning to prepare for their first polls in 15 years.

For 23-year-old surveyor Abdulhameed Mwas the upcoming parliamentary and presidential polls will be the first time he has ever had a chance to vote.

"We need new faces," he said. "We want to see some results for the Palestinian cause."

As Mwas waited for lunch in a felafel restaurant in the small village of al-Walaja, he added he hoped a new leadership would work to improve the economic situation in the impoverished Palestinian territories.

The hamlet of stone homes and narrow roads is built on a hillside lying partly in Israeli-occupied East Jerusalem and partly in the occupied West Bank. It is surrounded by Israel's separation barrier, which splits it from farming land and a nearby spring.

Palestinian President Mahmoud Abbas declared in January that parliamentary elections would be held on May 22, followed by historic presidential polls in late July.

"We are looking forward to our own elections to renew the legitimacy of the Palestinian political regime," Jibril Rajoub, a senior official in Abbas's Fatah faction, told Agence France-Presse (AFP). He voiced hopes of uniting Palestinians behind "one clear-cut political plan, the emergence of a Palestinian sovereign independent state."

The Palestinians broke ties with the United States administration of former U.S. President Donald Trump, who was a key ally of Israeli Prime Minister Benjamin Netanyahu. But they are hoping that under President Joe Biden long moribund peace talks with Israel seeking to create a coveted two-state solution may be restarted.

After initial skepticism among Palestinians, a new poll released this week showed some 61% of voters expect the parliamentary polls will indeed go ahead.

"Everyone is taking it seriously," pollster Khalil Shikaki of the Palestinian Center for Policy and Survey Research in Ramallah told AFP. "Three months ago the perception was that there would be no elections."

Since then the Fatah party of Abbas and its rival Hamas, which runs the Gaza Strip, have held talks in Egypt to lay the ground rules for the elections. This has boosted support among the Palestinians for the election and at least three-quarters of those polled have now said they would participate, Shikaki said.

The election commission has been set up, voters are being registered and parties began on Saturday to put forward their list of candidates. The fate of the Palestinians is inextricably linked to the outcome of Tuesday's vote in Israel.

Vote tallying in Israel resumed Thursday in the deadlocked parliamentary elections held earlier this week, with neither Netanyahu nor those determined to topple him gaining a clear path to forming a government. Tuesday's vote, the fourth Israeli parliamentary elections in two years, was widely seen as a referendum on Netanyahu’s fitness to rule while under indictment. However, neither the pro-Netanyahu camp nor his highly fragmented opponents gained 61 of the necessary 120 seats in parliament.

With around 93% of the votes counted, Netanyahu and his allies had a projected 52 seats compared to 57 held by his opponents.

In the middle are two undecided parties: Yemina, a seven-seat nationalist party headed by a former Netanyahu lieutenant, and Raam, an Arab party that won four seats. Neither party's leader has committed to either camp.

Several of Netanyahu’s opponents have started discussing the advancement of a bill to disqualify a politician under indictment from being tasked with forming a government, a measure aimed at barring the long-serving prime minister from office.

A similar bill was floated after the March 2020 elections but was never passed. Netanyahu is on trial for three cases involving fraud, breach of trust and accepting bribes. He has denied any wrongdoing and has dismissed the charges as a witch hunt by biased law enforcement and media.

Despite the charges against him, Netanyahu’s Likud party received around a quarter of the votes, making it the largest party in parliament. A final tally of the votes is expected to be completed on Friday.