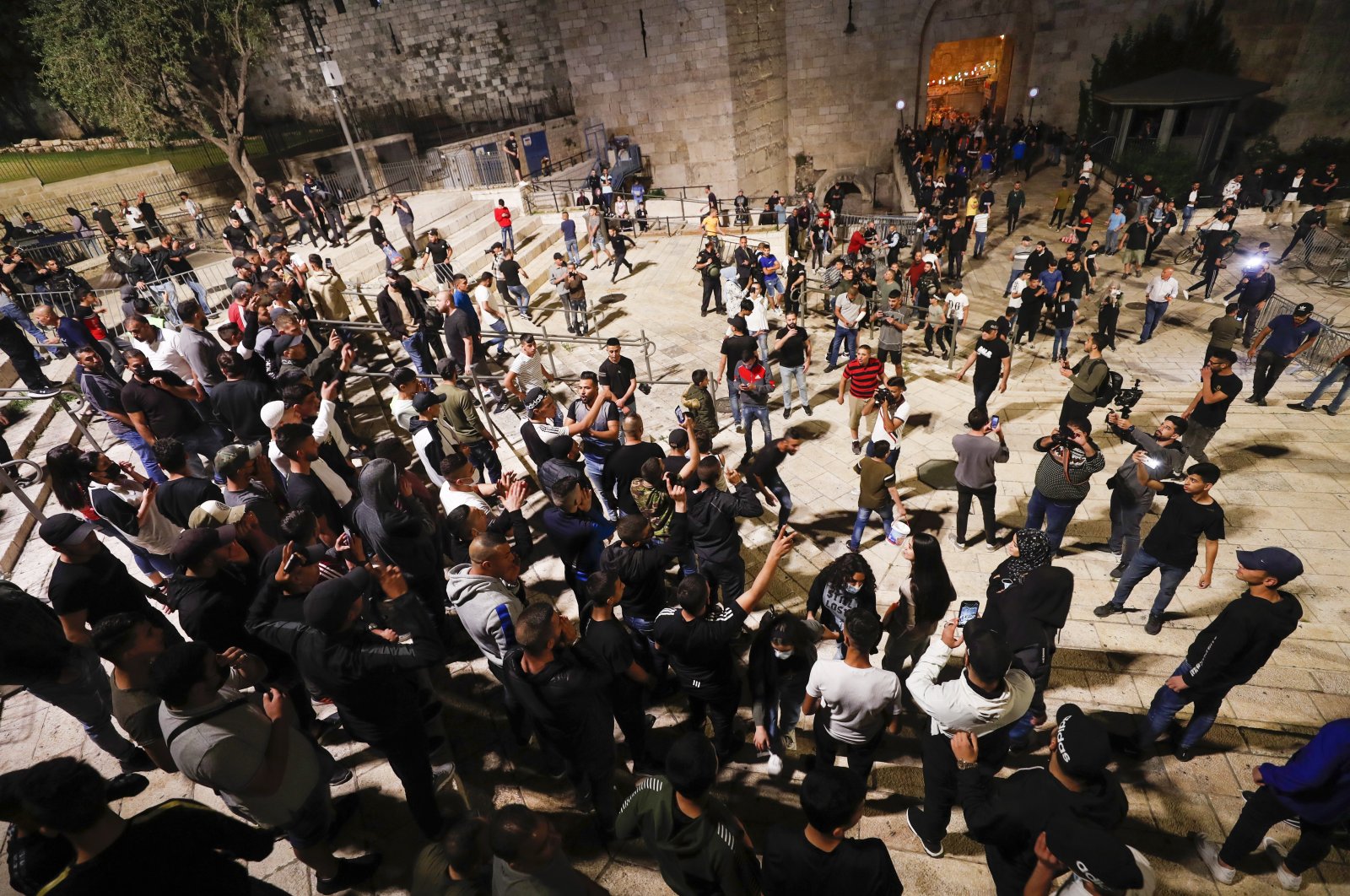 Palestinians celebrate after police removed the barricades blocking access and gatherings around the Damascus Gate area of the Old City in Jerusalem, Israel, April 25, 2021. (EPA Photo)
by Agencies Apr 26, 2021 11:00 am
RECOMMENDED

After keeping the Damascus Gate area in central Jerusalem closed to Palestinians since the start of the Islamic holy month of Ramadan, Israeli security forces late Sunday withdrew from the area.

Eyewitnesses told Anadolu Agency (AA) that after the Israeli withdrawal, Palestinians removed the iron barricades that had limited Palestinian movement in the area.

Hundreds of Palestinians celebrated the event as "a victory over the Israeli occupiers."

Palestinians gathered in celebration outside Jerusalem's Damascus Gate after barriers put up by Israeli police were removed, allowing them access to the square that became the focus of nightly Ramadan clashes.

Thousands filled the East Jerusalem plaza late on Sunday, some waving Palestinian flags after police permitted them access to the tiered entrance to Jerusalem's Old City that is a popular nighttime meeting place during the holy month.

Amid the celebratory scenes that went on into Monday morning, Ahmad Tibi, a lawmaker from Israel's Arab minority, criticized what he called the "mistaken" decision to put the metal barricades up in the first place.

"The decision to reopen is right," he told Reuters outside Damascus Gate. "It is a good decision in the right direction, but they should stop attacking Palestinians."

Around an hour later, however, the Israeli army harshly attacked Palestinians without any prior warning, according to eyewitnesses.

The eyewitnesses said the soldiers attacked the peaceful demonstration with tear gas and flash-bangs.

An elderly disabled person was among those who were attacked, and the occupying forces detained at least three people.

Some people were injured in the intervention, but they were treated at the scene and not hospitalized.

Since the start of Ramadan, Israeli forces have banned Palestinians from sitting in the Damascus Gate area and holding festive activities.

The situation escalated when Israeli settlers launched attacks on Palestinians in the tense city.

Tensions rose on Thursday when far-right Israeli demonstrators marched to the Old City with chants of "death to Arabs."

The move comes after the Israeli army said five rockets were fired from Gaza toward Israel overnight, two of which were intercepted by its air defenses.

"The fishing zone in the Gaza Strip would be completely closed until further notice," said COGAT, the Israeli military body that administers civilian affairs in Palestinian territories including the occupied West Bank.

The measure was "due to the continuation of the rocket fire from the Gaza Strip toward the state of Israel during the night," it said in a statement.

Israel would hold Hamas, which controls Gaza, "accountable for all that is done in and from the Gaza Strip toward Israel," COGAT said.

Hamas "will bear the consequences for the violence committed against the citizens" of Israel, it said.

Israel, which has imposed a blockade on Gaza for more than a decade, had set the fishing zone for the coastal enclave at 20 nautical miles following the Oslo peace accords in the 1990s.

But over the years Israel has reduced the size depending on tensions with Hamas.

In September, the fishing zone was set at 15 nautical miles after an agreement between Israel and Gaza's rulers.