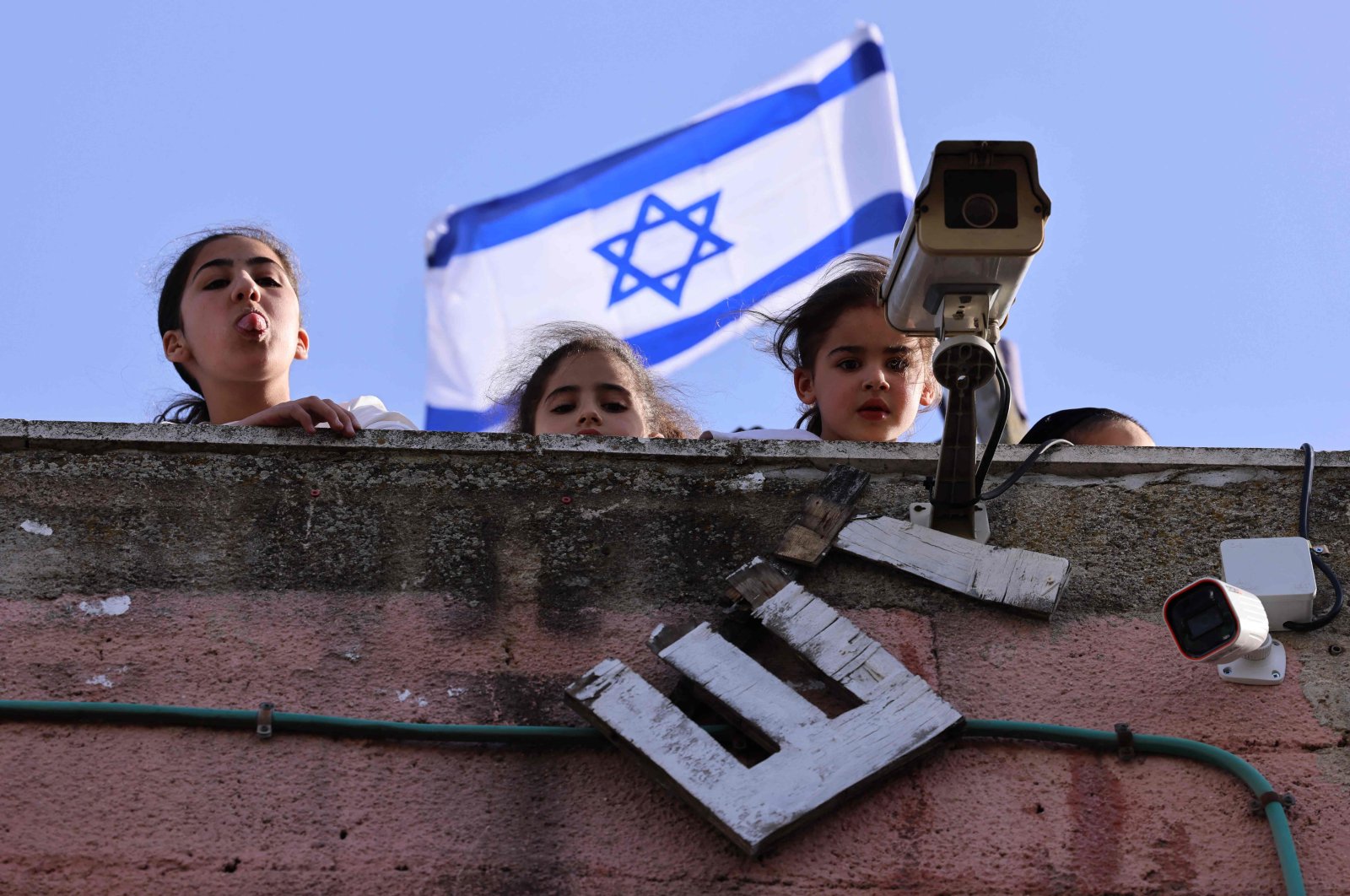 Children of Israeli settlers in the Palestinian neighbourhood of Sheikh Jarrah react as Palestinian and Israeli activists chant slogans in front of their house during a demonstration against the expulsion of Palestinian families from their homes in Israeli-occupied East Jerusalem, April 16, 2021. (AFP Photo)
by DAILY SABAH May 08, 2021 11:38 am
RECOMMENDED

"And Biden is still going, 'Oh, I support Israel in anything.' You support them in this genocidal removal of people from their homes?" the English singer asked.

"How would you like it, Joe Biden? You're sitting at home, that's your family lived for hundreds of years. Then some (expletive) comes along and goes, 'That's ours. I'm a settler, I'm going to take your house from you.'"

Waters said the situation in Sheikh Jarrah was "breaking his heart."

A note from Roger.

He also praised the Human Rights Watch, who followed the lead of Israeli rights group B'Tselem, in declaring Israel an apartheid state.

Waters called out the international community on its hypocrisy regarding Israel as the world "had something against apartheid" when it came to South Africa.

The musician said he is launching a campaign for the world's and Europe's football governing bodies, FIFA and UEFA, to isolate Israel.

The Israeli Central Court in East Jerusalem approved a decision to evict seven Palestinian families from their homes in favor of Israeli settlers at the beginning of this year. Palestinians have been protesting in Sheikh Jarrah since the court ruling, prompting clashes with Israeli police and Jewish settlers. On Monday, more than 200 people were injured after the Israeli police attacked worshippers at Al-Aqsa Mosque.

Since 1956, a total of 37 Palestinian families have been living in 27 homes in the neighborhood. However, illegal Jewish settlers have been trying to push them out on the basis of a law approved by the Israeli parliament in 1970.

Residents of another part of Palestine found themselves displaced to the Gaza Strip and the West Bank amid rising attacks by Zionist gangs to pave the way for the creation of the state of Israel.

Palestinians use "Nakba" in Arabic, or "The Catastrophe,” to refer to the 1948 expulsions by Zionist gangs.

The Palestinian-Israeli conflict dates back to 1917, when the British government, in the now-famous Balfour Declaration, called for "the establishment in Palestine of a national home for the Jewish people."