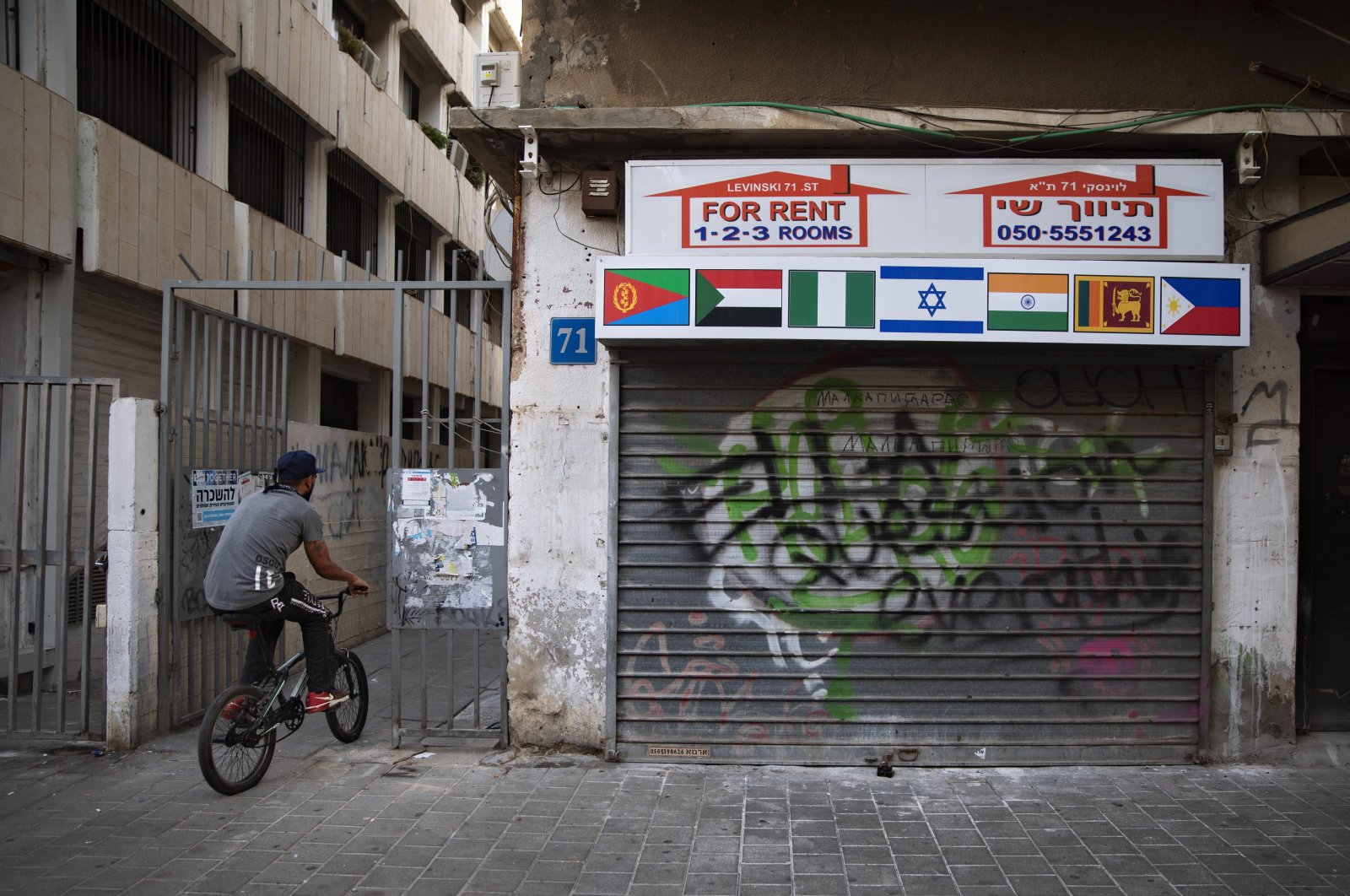 An African migrant rides his bicycle next to a closed real-estate office with the flags of Israel, Sudan and other African countries, in Tel Aviv, Israel, Oct. 23, 2020. (AP Photo)
by Daily Sabah with AP Nov 17, 2021 9:56 am

The widely condemned military coup in Sudan has put Israel in a tough spot, making Tel Aviv's plan to normalize ties with the African country more problematic, as thousands of Sudanese migrants live in fear of being deported to their politically unstable homeland

For nearly 10 years, Monim Haroon has only known one home: Israel. Like thousands of Sudanese migrants, he lives and works without legal status, fearing that a return to his native land would be a death sentence.

Israel's normalization of ties with Sudan, announced last year, had raised fears among the migrants that they would lose their migrant status and be forced to return. Now, weeks after a military coup derailed Sudan's transition to democracy, they dread being forcibly returned to a country under the full control of generals blamed for past atrocities.

"I am not against normalization," said Haroon. "But the normalization should be through the civilian Sudanese government, not the military powers that now control Sudan.”

The asylum-seekers plight points to one of the less savory aspects of the so-called Abraham Accords, a series of deals reached between Israel and four Arab countries last year. The U.S.-brokered agreements with Sudan and the United Arab Emirates (UAE), Bahrain and Morocco – widely hailed as a breakthrough in Mideast diplomacy – were struck with unelected Arab leaders with little tolerance for dissent who were richly rewarded by the Trump administration.

Sudan's military leaders, the driving force behind the agreement, secured the country's removal from the U.S. list of terrorism sponsors, unlocking vital international aid and commerce.

But then last month, Sudan's top military leader, Gen. Abdel-Fattah al-Burhan, disbanded the transitional government and ordered the arrest of civilian leaders, quashing hopes of a democratic transition after the 2019 overthrow of Omar al-Bashir.

The coup, which has been condemned by the United States and other Western nations, has left Israel in a potentially awkward situation.

Israel has been silent on the coup and its aftermath, indicating it intends to maintain normalized ties. A report on the Israeli news site Walla that an Israeli delegation had secretly visited Sudan to meet with the coup leaders deepened migrant fears that they could soon be deported. The Israeli Foreign Ministry and Sudanese officials did not respond to requests for comment.

According to the report by U.K.-based news site Middle East Eye (MEE), the Israeli delegation met with Sudanese military officials, including Abdelrahim Hamdan Dagalo, who is deputy head of the Rapid Support Forces (RSF) led by his brother Gen. Mohammed Hamdan Dagalo, widely known as Hemedti.

The RSF has been facing mounting pressure from human rights advocates who accuse the unit of targeting pro-democracy movements and protesters. It was also involved in the recent military power grab.

Current leader of Sudan al-Burhan, who reelected himself as the head of the transitional government after the coup, had frequently met with Israeli officials and, according to media reports, was excited about the prospect of normalizing diplomatic ties with Tel Aviv.

Sudanese and Eritrean migrants began arriving in Israel in 2005, with many of the Sudanese fleeing persecution in the western Darfur region and the country's south. Seeking safety and opportunity in Israel, they made often dangerous journeys across Egypt's rugged Sinai Peninsula.

Israel initially did little to stop the influx, but as more migrants arrived, the authorities began detaining thousands in remote desert prisons. And in 2013, Israel completed construction of a fenced barrier along its border with Egypt that mostly halted the migration.

The migrants' presence has sparked a backlash among many Israelis who associate them with the crime and poverty in south Tel Aviv, where most of them settled. Right-wing governments in recent years have made various attempts to expel them.

Ayelet Shaked, a prominent right-wing politician, has described Sudanese migrants as "infiltrators” and said they should be sent back since ties have been normalized. She is now the interior minister in Israel's new government, a position that oversees immigration policies.

"We are worried because she has always been against asylum-seekers,” Haroon said.

The Interior Ministry said the status of Sudanese migrants has not changed following the coup but declined to answer further questions.

Israel has resolved only a small fraction of the thousands of Eritrean and Sudanese asylum claims, deeming the vast majority to be economic migrants. Under international law, Israel cannot deport migrants back to countries where their life or basic freedoms are seriously threatened.

Sudan's former president al-Bashir was charged with genocide by the International Criminal Court (ICC) for mass killings that took place in Darfur during the 2000s. The region remains unstable, with deadly tribal clashes are still common. Since the October coup, at least 23 Sudanese protesters have been killed in confrontations between pro-democracy demonstrators and military forces.

"Although Israel does not send migrants back, consecutive decrees have purposefully made life unbearable for African refugees,” said Sigal Rozen, public policy director at the Israeli Hotline for Refugees and Migrants, an advocacy group that assists the Africans.

Most of the estimated 28,000 Sudanese and Eritrean migrants work in menial jobs and struggle to make ends meet. Their numbers have dwindled by half since the 2000s, with most traveling onward to third countries, considering it unsafe to return home.

In 2012, Israel ordered the deportation of over 1,000 migrants back to South Sudan after it gained independence, arguing that it was safe for them to go home. Those who voluntarily returned were given a cash incentive of about $1,000. The move was criticized by rights groups following South Sudan’s descent into civil war in 2013.

Stuck in Israeli legislative limbo, most African migrants are barred from basic social rights such as sick pay and driving licenses and are also subject to financial penalties. Among the most controversial of these was the "Deposit Law,” which limited asylum-seekers to accessing only 80% of their salaries while they remained in Israel. The law, which returned the remainder of their salaries only if they left the country, was later reversed in 2020.

In April, Israel's Supreme Court ordered the Interior Ministry to resolve thousands of the unanswered Sudanese asylum claims by the end of the year or grant them temporary residency.

Sudan was noticeably absent from anniversary commemorations of the Abraham Accords earlier this fall. As Israel and the other three nations trumpeted high-level visits and opened embassies, there has been little on the Sudan front beyond a surprise meeting between Israeli and Sudanese officials in the UAE weeks before the coup. Sudan also said in September that it would seize the assets of companies linked to Hamas, the Palestinian resistance group that rules Gaza.

Haim Koren, former Israeli ambassador to Egypt and South Sudan, attributed the delays to concerns by Sudanese officials over whether Israel's new government and the Biden administration would follow through on the promises of the normalization agreement. Both have expressed strong support for deepening and expanding the Abraham Accords.

"There remain areas that still require negotiation, but I expect full relations to be established,” said Koren. "Maybe not today, but it will happen.”