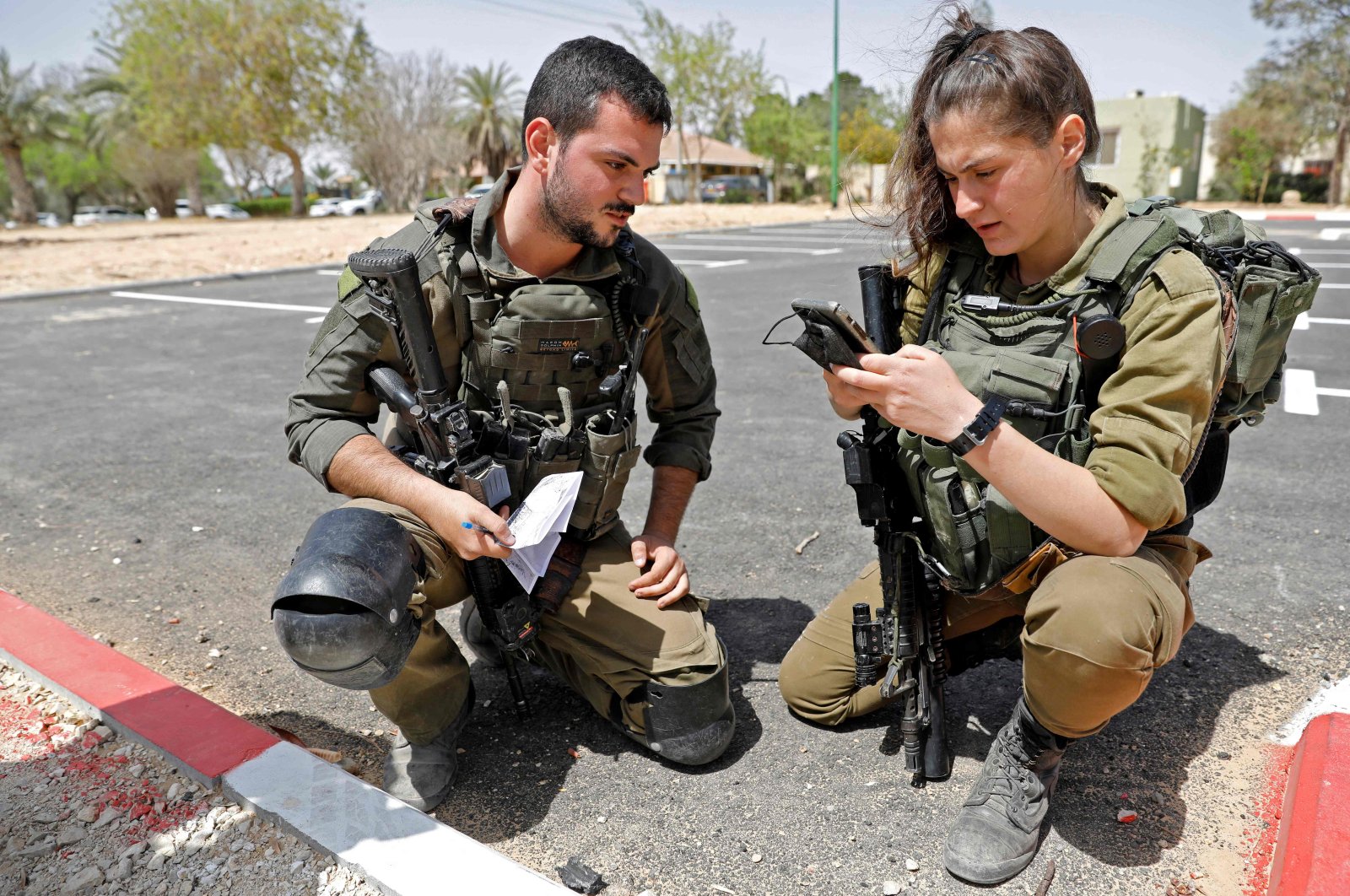 Israeli soldiers inspect a piece of debris after a missile launched from Syria landed in the vicinity of the Dimona nuclear site in Israel's southern Negev desert, Israel, April 22, 2021. (AFP Photo)
by ASSOCIATED PRESS
Apr 22, 2021 11:49 am

The Israeli military said that an anti-aircraft missile fired by the Syrian regime landed in southern Israel early Thursday, setting off air raid sirens near the country's top-secret nuclear reactor. In response, it said it attacked the missile launcher and air-defense systems in neighboring Syria.

Israeli media later described the regime missile as an "errant” projectile, not a deliberate attack deep inside Israel. In recent years, Israel has repeatedly launched airstrikes at Syria, including at military targets linked to foes Iran and the Lebanese Hezbollah militia, both allies of Syrian regime leader Bashar Assad. Such strikes routinely draw Syrian anti-aircraft fire. Thursday's exchange was unusual because the projectile landed deep inside Israel.

Syria's state news agency SANA said the exchange began with an Israeli airstrike on Dumeir, a suburb of the capital of Damascus. Dumeir is believed to house regime army installations and batteries as well as bases and weapons depots belonging to Iran-backed militias. SANA said four soldiers were wounded.

The Britain-based Syrian Observatory for Human Rights, an opposition war monitoring group based in Britain that tracks Syria’s civil war, said the Israeli strikes hit an air defense base belonging to the regime military and destroyed air defense batteries in the area. It said the military fired surface-to-air missiles in response.

Assad's media made no mention of an anti-aircraft missile landing deep inside Israel.

The Israeli military described the projectile that landed near the nuclear site as a surface-to-air missile, which is usually used for air defense against warplanes or other missiles. That could suggest the missile had targeted Israeli warplanes but missed and flew off errantly. However, Dimona, the Negev desert town where Israel's nuclear reactor is located, is some 300 kilometers (185 miles) south of Damascus, a long-range for an errantly fired surface-to-air missile.

The Israeli army said it had deployed a missile defense system to intercept the projectile and that there had been no damage. The Israeli military later said in a statement that an initial investigation indicated that the missile was not intercepted.

The air raid sirens were sounded in Abu Krinat, a village just a few kilometers from Dimona. Explosions heard across Israel might have been the air-defense systems.

Apparent missile fragments were found in a swimming pool in Ashalim, a community approximately 20 miles southwest of Dimona. Israeli troops arrived at the scene and collected the fragments.

The military said that in response to the incoming missile, it launched an airstrike at the battery that launched the anti-aircraft missile and other surface-to-air batteries in Syria.

The exchange between Israel and Syria comes against the backdrop of growing tensions between Israel and Iran, a key ally of the Assad regime. Iran, which maintains troops and proxies in Syria, has accused Israel of a series of attacks on its nuclear facilities, including sabotage at its Natanz nuclear facility on April 11, and vowed revenge. It also threatened to complicate United States-led attempts to revive the international nuclear deal with Iran.