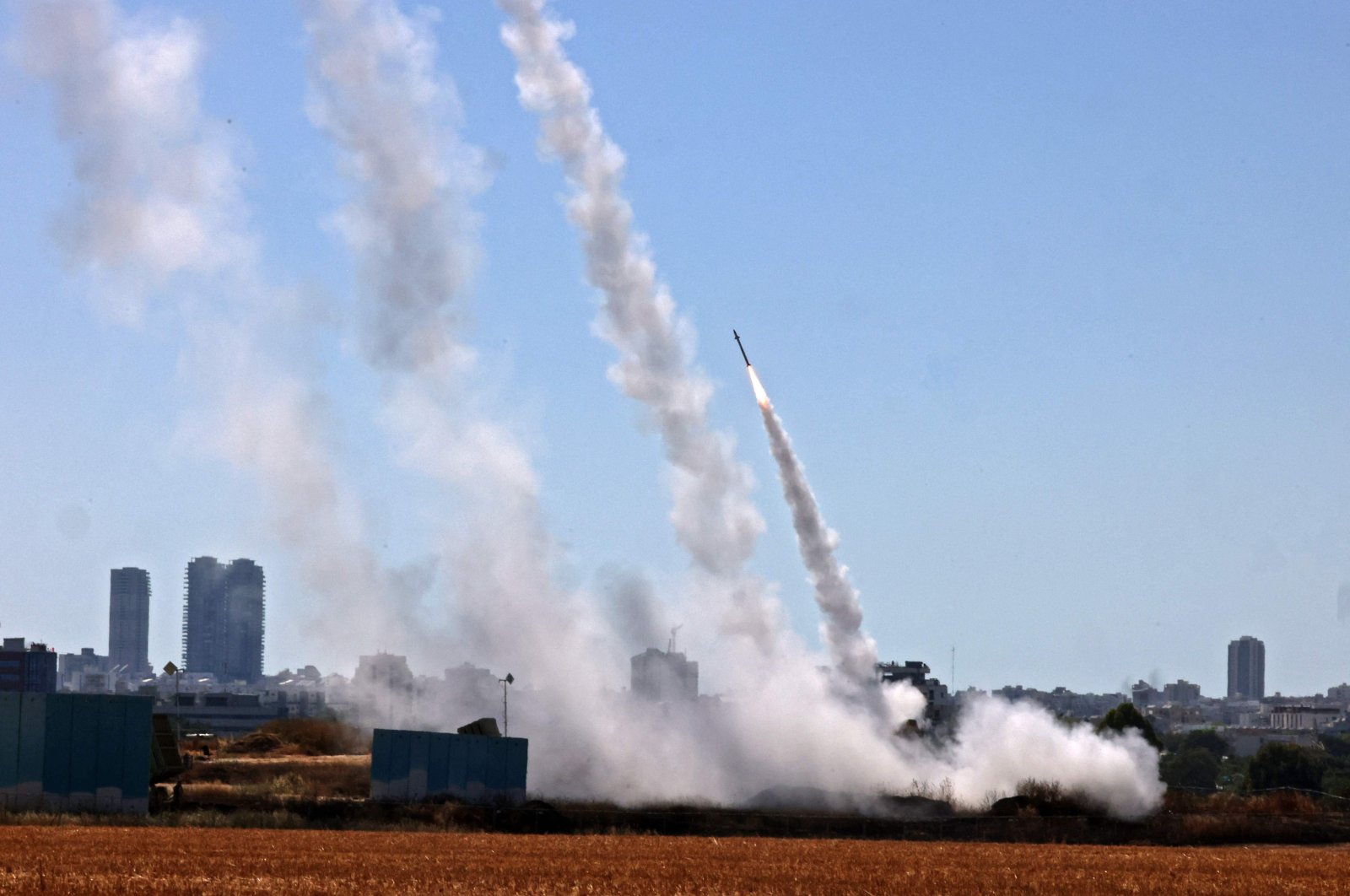 Israel's Iron Dome aerial defence system is activated to intercept a rocket launched from the Gaza Strip, controlled by the Palestinian Hamas movement, above the southern Israeli city of Ashdod, on May 12, 2021. (AFP Photo)
by Agencies Sep 07, 2021 3:41 pm
RECOMMENDED

Tel Aviv "greatly accelerated" its plans to strike Iran over its nuclear program that many nations worry Tehran will further develop despite international pressure and imposed sanctions, according to the Israeli army chief.

In an interview with Walla news website, Israeli Defense Forces Chief of Staff Lt. Gen. Aviv Kochavi said that preparations for possible strikes on Iran are being intensified. He added that “a significant chunk of the boost to the defense budget, as was recently agreed, was intended" to minimize "Iranian presence in the Middle East” and target its proxies in the region such as Hezbollah and Hamas. Last month, Israeli Defense Minister Benny Gantz said Tel Aviv was "ready to attack Iran," adding Iran represented "a global challenge."

“It’s a very complicated job with much more intelligence, much more operational capabilities, much more armaments. We’re working on all these things,” Kohavi told Walla news. "Iran seeks to pose a multi-front challenge to Israel by building up its power in Lebanon and Gaza, deploying militias in Syria and Iraq, and establishing supporters in Yemen," Gantz said.

Tensions between Israel and Iran over the latter’s nuclear program have flared recently. In 2018, former United States President Donald Trump unilaterally withdrew Washington from the 2015 nuclear agreement with Iran and reimposed sanctions in a move aimed to bring Tehran back to negotiations for what Trump hoped would be a "better" deal. Talks in the past months between Iran and Western powers in Vienna on reviving the nuclear deal have not achieved a breakthrough so far.

Meanwhile, U.S. defense chief Lloyd Austin warned allies Tuesday that Tehran continues to ramp up tensions in the Middle East through its military activities. Speaking in Qatar's capital of Doha, Austin said that “Iran’s support for terrorism and its willingness to supply increasingly lethal weapons to non-state groups undermines the regional stability that we all seek."

“So we’re committed to working together to enhance regional security and regional defenses against destabilizing actions – including Iran’s nuclear aspirations,” he added.

Flames between Israel and another foe Hamas were also raging Tuesday. Israel launched airstrikes on what it said was a Hamas military site in the Gaza Strip early Tuesday after incendiary balloons were sent into Israeli territory, the Israeli army said. Fighter jets struck a Hamas rocket manufacturing workshop as well as a Hamas military compound in Khan Yunis, a city in southern Gaza, according to the army statement.

The army said the compound houses a cement factory used for building tunnels used for attacks "and is purposefully located in a civilian area adjacent to a mosque and a water treatment site.”

The strikes came in response to incendiary balloons launched by Hamas into Israeli territory, the army said. The devices were a show of support for six escapees, which Hamas and other Palestinian militants hailed as a heroic victory.

Israeli forces searched for six Palestinian prisoners who had escaped from a high-security facility Monday in the biggest prison break of its kind in decades.

For Israel, the escape – through a secret tunnel, likely with outside help – marks an embarrassing security breach. The massive manhunt through Israel's north and the occupied West Bank continued Tuesday as Jews celebrated Rosh Hashana, the Jewish new year.

The prisoners appear to have gone into hiding and there was no indication Israeli authorities view them as an immediate threat. The developments marked an awkward moment for Israel's new coalition government as it seeks to maintain calm after the deadly 11-day war with Hamas in May and amid a surge in COVID-19 infections.

Palestinians consider prisoners held by Israel to be heroes of their national cause and many celebrated the escape on social media. Efforts to capture the six will likely draw attention to the Palestinian Authority’s (PA) security coordination with Israel, which is deeply unpopular among Palestinians. There was no immediate comment from the PA, but President Mahmoud Abbas’ Fatah party praised the escape.

A photo released by the prison service showed a narrow hole in the floor of a cell, and Israeli security forces could be seen examining a similar hole on a stretch of gravel just outside the walls of the prison. Israeli officials said they have erected roadblocks and are conducting patrols in the area.

Israel’s Army Radio said 400 prisoners are being moved as a protective measure against any additional escape attempts. The radio said the prisoners escaped through a tunnel from the Gilboa prison, just north of the West Bank, one of Israel’s most secure facilities. It was the biggest Palestinian escape from an Israeli prison since 1987 when six militants from the Islamic Jihad group broke out of a heavily guarded prison in Gaza months before the outbreak of the first intifada, or Palestinian uprising against Israel.

The six who escaped overnight Sunday are believed to have headed back to their hometown of Jenin, in the occupied West Bank, about 25 kilometers (15 miles) away. The internationally recognized PA wields little control in the town, where militants in recent weeks have clashed with Israeli forces.

The Palestinian Prisoners’ Club, which represents both former and current prisoners, identified the men as ranging in age from 26 to 49 years old. The most well-known among them is Zakaria Zubeidi, 46, who was a prominent leader in the Al-Aqsa Martyrs Brigade, a group affiliated with Fatah from 2000-2005. He was arrested again in 2019 on what Israeli authorities said were new terror suspicions.

As a child, Zubeidi had been part of a children’s theater troupe in Jenin established by Arna Mer-Khamis, an Israeli rights activist, that was the subject of a 2004 documentary. The other five prisoners were members of Islamic Jihad, and the prisoners’ group said four were serving life sentences. Israeli Prime Minister Naftali Bennett called the breakout a "grave incident” that required maximum effort by Israel’s various security branches.

The escape poses a dilemma for Abbas, who met with Israeli Defense Minister Benny Gantz a week ago in the first high-level meeting between the two sides in years. The Palestinian president has said he hopes to revive the peace process after more than a decadelong hiatus under former Israeli Prime Minister Benjamin Netanyahu. But Abbas’ Palestinian Authority is deeply unpopular. He canceled the first elections in 15 years in April when it appeared his Fatah party would suffer an embarrassing defeat.

The PA was largely sidelined during the Gaza war in May, and it has cracked down on a wave of protests following the death of an activist in its custody in June. PA security forces coordinate with Israel to target Hamas and other militants that both view as a threat. But any effort to help Israel rearrest the escaped prisoners risks further undermining the PA in the eyes of Palestinians.