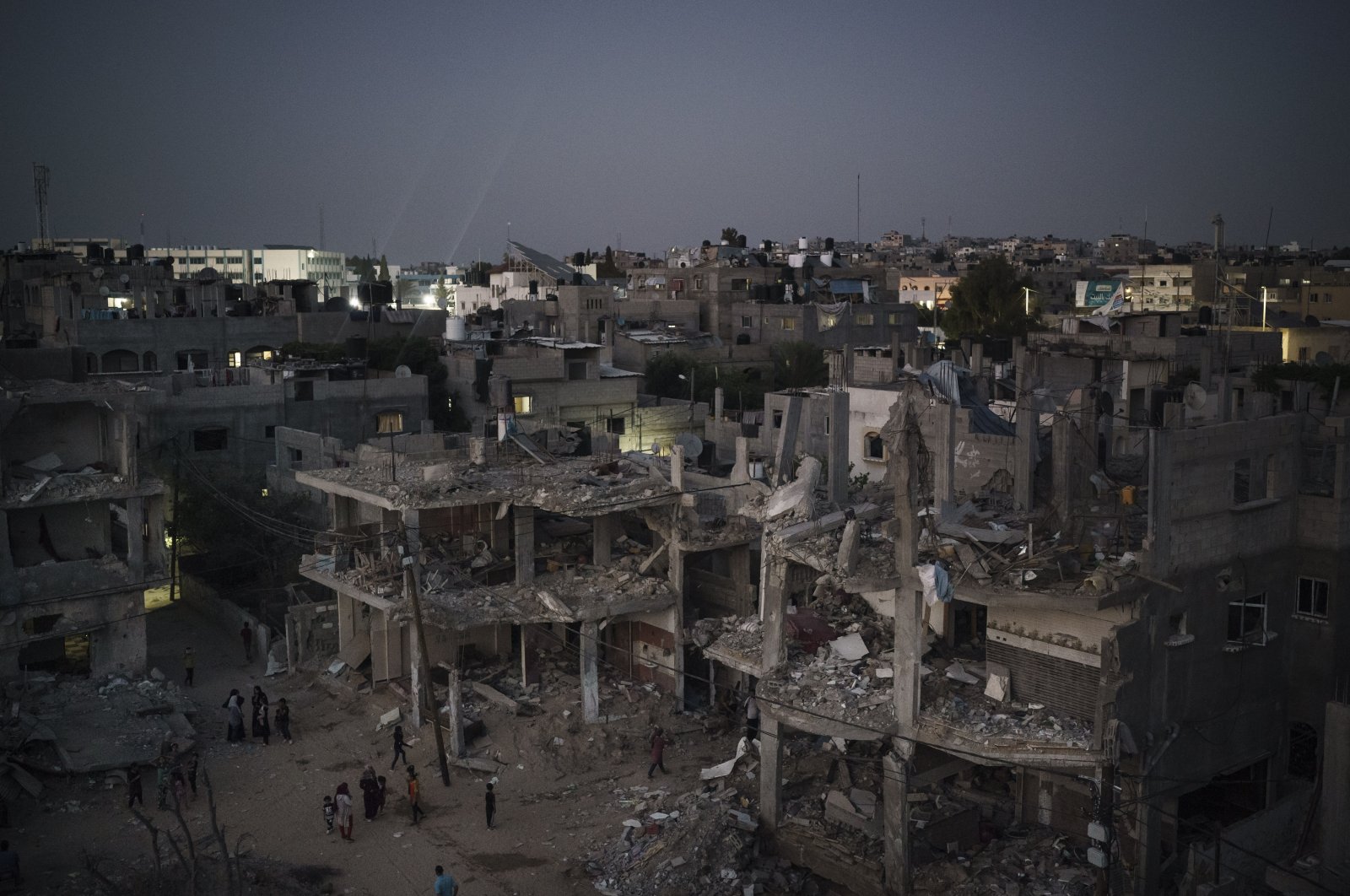 Palestinians walk at night along Al-Baali Street, next to homes heavily damaged by airstrikes during an 11-day war between Israel and Hamas in Beit Hanoun, northern Gaza Strip, Palestine, May 31, 2021. (AP Photo)
by ASSOCIATED PRESS Aug 25, 2021 9:06 am

After 13 years of constant conflicts that were followed by the formation of Israel decades ago, the Gaza Strip is left in destruction and grief with an increased death toll from the fourth war in 13 years

The latest war between Hamas and Israel followed a familiar and troubling pattern: devastating Israeli airstrikes, a mounting loss of life and appeals for the "senseless cycle” to end. Left behind after each war in 2008-09, 2012, 2014 and 2021 is an enduring fear of the next one.

In Gaza, Palestinians mourn the dead, try to resume life amid the ruins and rebuild. The United Nations says there has been more than $5 billion worth of damage over four wars to Gaza’s homes, agriculture, industry, electricity and water infrastructure. A closer look behind the staggering figure reveals the daunting challenges for any rebuilding plan.

Satellite imagery and death tolls show the magnitude of the devastation. Economic data reveals a young populace, hungry for work but with few job prospects. Even before May's war, polls show that Gaza residents are dissatisfied with their living conditions and 40% would leave if they could. Gaza, experts say, is in crisis, each war further exacerbating the struggles faced by Palestinians.

Gaza has been a flashpoint between Israel and Palestine for decades. Over two-thirds of the population are families that fled or were forced from their homes during the war surrounding Israel’s creation in 1948. In the late 1980s, the first Palestinian uprising against Israeli rule erupted in Gaza, and resistance group Hamas formed, opposed to Israel's existence.

In 2007, a year after winning Palestinian parliamentary elections, Hamas wrested control of Gaza. Israel, with Egypt’s help, swiftly closed Gaza’s borders, and today little can enter or leave without Israeli permission. In each war, Israel launches missiles and airstrikes and, in May, struck over 1,500 targets in Gaza. Israel says it aims only at military targets, but civilians and civilian structures are often hit as well. Israel blames Hamas, arguing that the group often operates in residential areas.

The U.N. tracked the damage to structures in Gaza using satellite imagery following the wars in 2009, 2014 and 2021. By layering the images, one war atop the next, the map reveals dozens of areas along Gaza’s border that suffered repeated rounds of Israeli strikes.

Among those are cities such as Rafah in southern Gaza, the town of Khuza’a and the northern town of Beit Hanoun, where Khaldiya Nassir lost her husband to Israeli gunfire and has seen her home damaged twice by war.

"This war? It destroyed us,” she said after the latest conflict. "Everything is gone. We used to have a home but now it’s gone. Every time there are problems, every time we have wars.”

There are many families like the Nassirs and neighborhoods like Beit Hanoun. Every war brings an accounting of the people killed and places destroyed. The wars have killed more than 4,000 Palestinians, more than half of whom were civilians, according to the U.N. Israeli officials say 106 people have died in the fighting, including civilians, soldiers and foreign residents.

The cumulative damage from the strikes also brings a monetary cost. The Israel Tax Authority paid 303 million shekels ($96 million in today's dollars) to its citizens for repairs after the conflicts in 2009, 2012 and 2014. In May's conflict, according to the Institute for National Security Studies, an Israeli think-tank, estimated payouts could reach 315 million shekels (or $97 million).

In Gaza, the dollar cost encompasses a scale of damage wider and more lasting. The direct damage from four wars amounts to more than $5 billion in losses, using 2021 dollars. Palestinian authorities largely depend on foreign donors to rebuild, with aid funneled to families and steered to construction projects through the U.N. For months and sometimes years, damage goes unrepaired as donations are prioritized for the buildings worst hit. And there are persistent shortages of necessary supplies: Cement and steel require lengthy approvals to enter Gaza, as Israel supervises materials it believes Hamas could use to rearm.

Gaza’s economy is caught in a "vicious” cycle of destruction, reconstruction and infusions of aid - "just to get it back to before this military operation,” said Rami Alazzeh, a U.N. economist who has studied the wars’ impact on Gaza. "If this cycle keeps going on, Gaza can never recover,” he said.

A generation shaped by war

According to Palestinian authorities, 70% of Gaza’s 2 million residents are not yet 30 – a generation of young adults who spent their childhood and adolescent years in an active war zone. The median age in Gaza is 19, compared to 30 in Israel. Among the challenges they face are joblessness and the long-term effects of living through war.

Unemployment in Gaza reached levels more than twice that of the West Bank, where goods and people move more freely and where permits to work are easier to get. Joblessness has hit Gaza’s young adults especially hard, with unemployment standing at 62% in June.

"This is a lost generation. A generation that is losing years of experience and skills that can be built,” Alazzeh said.

Symptoms of post-traumatic stress disorder are common among Gaza’s children – at least 640,000 of whom have been born since the first war between Hamas and Israel. In a study of 1,000 children after the 2012 war, nearly every child said they’d heard or witnessed shelling by tanks, artillery or military planes. More than half said they’d witnessed someone being injured or killed.

"Gaza is so dense. When these airstrikes occur, even if it’s not your building, you’re seeing it, you’re hearing it,” said Yara Asi, a scholar studying public health in conflict zones. Abdullah Srour, 16, knows the toll of surviving four wars. He spent years in therapy recovering from memories of the 2014 war when a missile hit his bedroom in Jabaliya refugee camp.

In May, Abdullah watched as rescue teams pulled out the bodies of a family crushed to death by rubble. His mother said he is restless now, often biting his nails and can no longer sleep alone.

Wanting to leave, no place to go

The wars have chipped away at any sense of positivity toward life in Gaza, according to surveys by the Palestinian Center for Policy and Survey Research. As of June, positive perceptions among Gazans of their living conditions stood at 14%. Spirits were higher around 2013, reflecting perceived gains from the 2012 war. But in recent years, positivity has dipped as low as 4%. Hardship fuels the desire for escape.

Some 40% of Palestinians said in the June survey they were forced to consider leaving Gaza permanently. The chance to do so is extremely rare. Gaza has no airport or commercial seaport, and exits by land are closed to the vast majority of travelers, with permission needed from Israel or Egypt, and Hamas.

Visa waiting lists are thousands of names long. But if an opportunity arises outside Gaza, many take it.

"People are not finding the opportunities or they’ve looked for too long,” said Majd Mashharawi, an engineer and entrepreneur. Her brother and many of her university classmates gave up searching, leaving for Europe or Turkey with no plans to come back. She doesn’t blame them. Life in Gaza and repeated war makes it almost impossible to picture the future, she said.

For Alazzeh, the economist, the totality of the wars’ impact remains difficult to grasp. "We like to put a dollar sign on everything,” he said. But "the people in Gaza who lived under four wars, 14 years of closures, restrictions and blockade – how do you put a dollar sign on this? How do you quantify basically the suffering?”