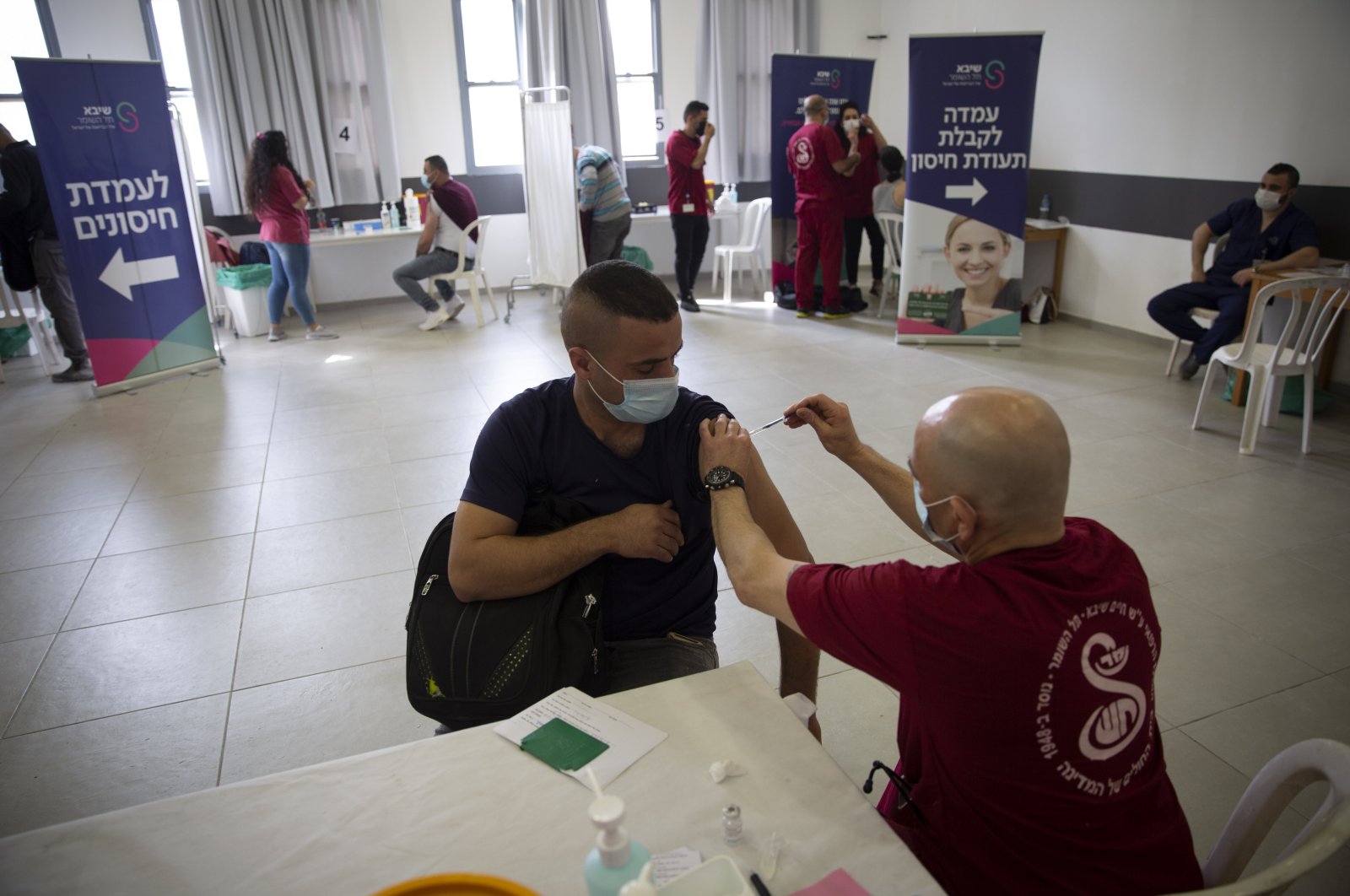 A Palestinian laborer who works in Israel receives his first dose of the Moderna COVID-19 vaccine at a coronavirus vaccination center set up at the Taiba checkpoint crossing between Israel and the West Bank, near the West Bank town of Tulkarem, Monday, March 8, 2021. (AP Photo)
by ASSOCIATED PRESS Mar 08, 2021 1:59 pm
RECOMMENDED

After delays, Israel started vaccinating Palestinians who work inside the country and its occupied West Bank settlements on Monday, more than two months after launching an immunization blitz of its own population.

The vaccination drive orchestrated by COGAT, Israel's military agency coordinating government operations in the West Bank, had been beset by postponements.

Some 100,000 Palestinian laborers from the West Bank work in Israel and its settlements, which are widely seen internationally as illegal and an obstacle to peace.

Maj. Gen. Kamil Abu Rukun, the head of COGAT, said in a statement in Arabic that Israelis and Palestinians "live in the same epidemiological space" and that it was a shared interest to vaccinate Palestinians.

Israel has administered over 8.7 million doses of the Pfizer vaccine to its population of 9.3 million. Over 3.7 million Israelis – more than 40% – have received two doses of the vaccine.

But until Monday, Israel had provided few vaccines for Palestinians in the West Bank and Gaza Strip, a move that has underscored global disparities and drawn international criticism.

Human rights groups and many Palestinians say that as an occupying power, Israel is responsible for providing vaccines to the Palestinians. Israel says that under interim peace accords reached in the 1990s, it does not have any such obligation.

Israeli officials have said the priority is vaccinating Israel's own population first, while the Palestinian Authority (PA) has said it will obtain its own vaccines through a World Health Organization (WHO) partnership with humanitarian organizations known as COVAX.

To date, the PA has acquired enough vaccine doses for only 6,000 people in the West Bank and the Gaza Strip, which are home to nearly 5 million Palestinians.

It received 2,000 doses from Israel and acquired another 10,000 doses of a Russian-made vaccine. Each is given in two doses. Israel had also announced plans to share surplus vaccines with far-flung allies in Africa, Europe and Latin America, but the decision was frozen by legal questions.

On Thursday, Israeli Prime Minister Benjamin Netanyahu met with leaders of Denmark and Austria and said the three nations would join forces in the fight against COVID-19 with an investment in research and the roll out of vaccines.