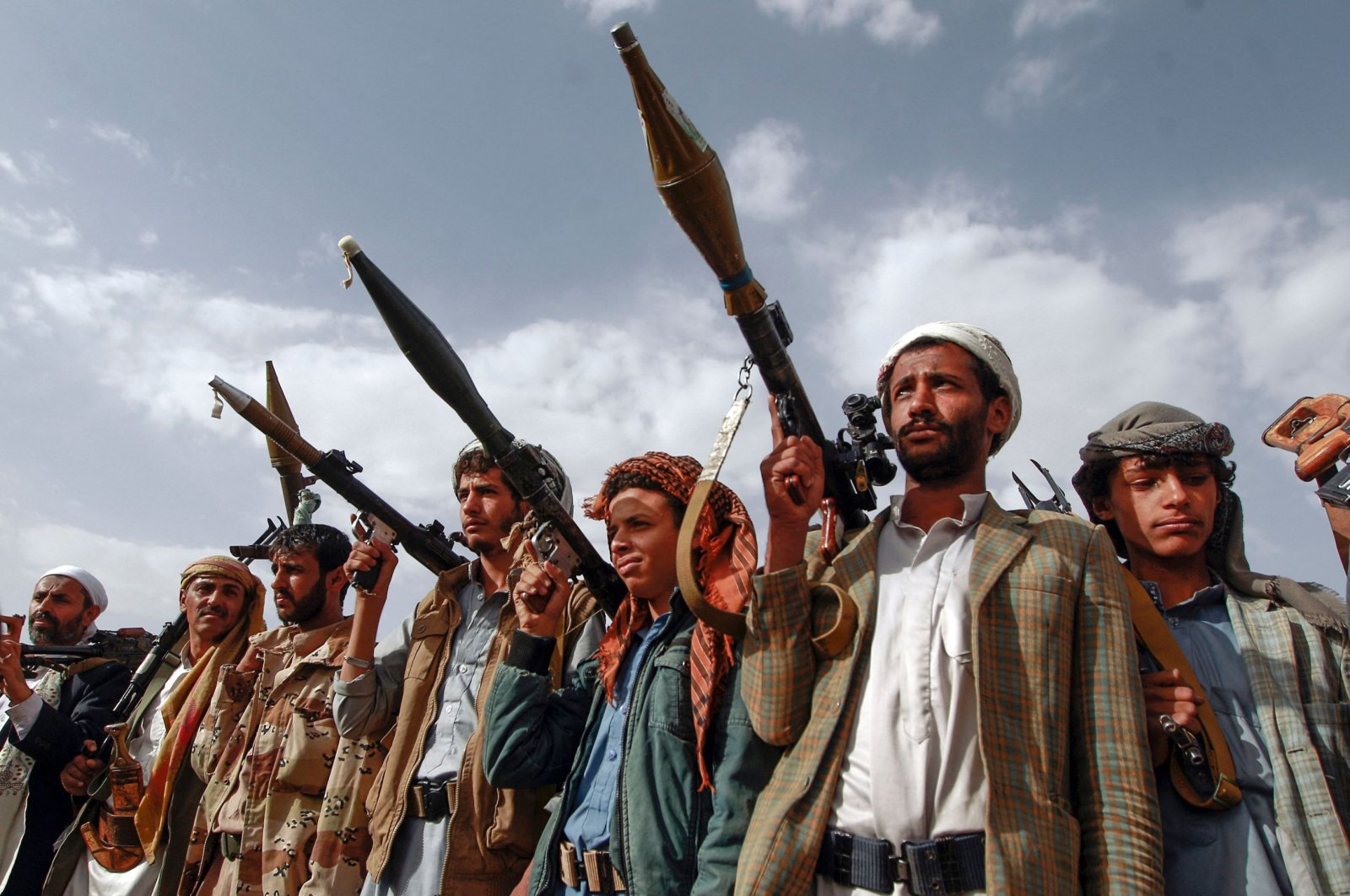 Armed tribesmen, loyal to the Shiite Huthi rebels, brandish their weapons at a gathering in the capital Sanaa to mobilize more fighters to battlefronts to fight pro-government forces in several Yemeni cities, June 20, 2016. (AFP Photo)
by Reuters Mar 08, 2021 12:50 pm
RECOMMENDED

Yemen's Houthi forces fired drones and missiles at the heart of Saudi Arabia's oil industry Sunday, including a Saudi Aramco facility at Ras Tanura, which is vital to petroleum exports. Riyadh has called the attack a failed assault on global energy security.

The Saudi energy ministry said there were no casualties or loss of property from the attacks. The defense ministry said it intercepted an armed drone coming from the sea before hitting its target at an oil storage yard at Ras Tanura, the site of a refinery and the world's biggest offshore oil loading facility.

Shrapnel from a ballistic missile fell near a residential compound in Dhahran used by state-controlled Saudi Aramco, the world's biggest oil company, the ministries said.

The attacks drove Brent crude prices above $70 a barrel to their highest since January 2020, while U.S. crude futures touched their loftiest since October 2018.

The sites are located on the Gulf coast across from Iran and near Iraq and Bahrain, which is home to the U.S. Navy's Fifth Fleet. Yemen lies thousands of kilometers southwest on the Gulf of Aden.

Announcing the attacks, the Houthis, who have been battling a Saudi-led coalition for six years, also said they attacked military targets in the Saudi cities of Dammam, Asir and Jazan.

"Such acts of sabotage do not only target the Kingdom of Saudi Arabia, but also the security and stability of energy supplies to the world, and therefore, the global economy," a ministry spokesman said in a statement on state media.

The Saudi-led coalition earlier said it intercepted 12 armed drones aimed at "civilian targets" without specifying a location as well as two ballistic missiles fired towards Jazan.

The coalition said on Sunday it conducted airstrikes on Houthi military targets in Sanaa and other regions in response to the armed drones launched toward Saudi Arabia.

The Eastern Province is home to most of Aramco's production and export facilities. In 2019, Saudi Arabia, the world's top oil exporter, was shaken by a big missile and drone attack on oil installations just a few kilometers (miles) from the facilities hit on Sunday, which Riyadh blamed on Iran, a charge Tehran denies.

That attack, which was claimed by the Houthis but which Riyadh said did not originate from Yemen, forced Saudi Arabia to temporarily shut more than half of its crude output, causing a huge price spike.

Houthi military spokesman Yahya Sarea said on Sunday that the group had fired 14 drones and eight ballistic missiles in a "wide operation in the heart of Saudi Arabia."

The Houthis recently stepped up cross-border attacks on Saudi Arabia at a time when the United States and the United Nations are pushing for a cease-fire to revive stalled political negotiations to end the war.

Last Thursday, the movement said it fired a missile at an Aramco petroleum products distribution plant in the Red Sea city of Jeddah which the Houthis had attacked in November 2020, hitting a storage tank. Aramco and Saudi authorities have not commented on Thursday's claim.

The military alliance intervened in Yemen in March 2015 after the Houthis ousted the Saudi-backed government from power in the capital, Sanaa. The conflict is widely seen in the region as a proxy war between Saudi Arabia and Iran.

Colonel Turki al-Malki, the spokesman of the Saudi defense ministry and the Saudi-led military coalition, said in a statement that the ministry would take "all necessary, deterrent measures to safeguard its national assets."

Earlier, the coalition said it conducted airstrikes on Houthi military targets in Sanaa and other Yemeni regions Sunday and warned that "civilians and civilian objects in the Kingdom are a red line."

It said the Houthis had been emboldened after the new U.S. administration revoked terrorist designations on the group in February that had been imposed by former President Donald Trump's administration and backed by Riyadh.

In February, Biden declared a halt to U.S. support for offensive operations by the coalition but said the United States would continue to help Saudi Arabia defend itself.

The war, which has been in a military stalemate for years, has killed tens of thousands of people and pushed Yemen to the brink of famine. The Houthis say they are fighting a corrupt system and foreign aggression.