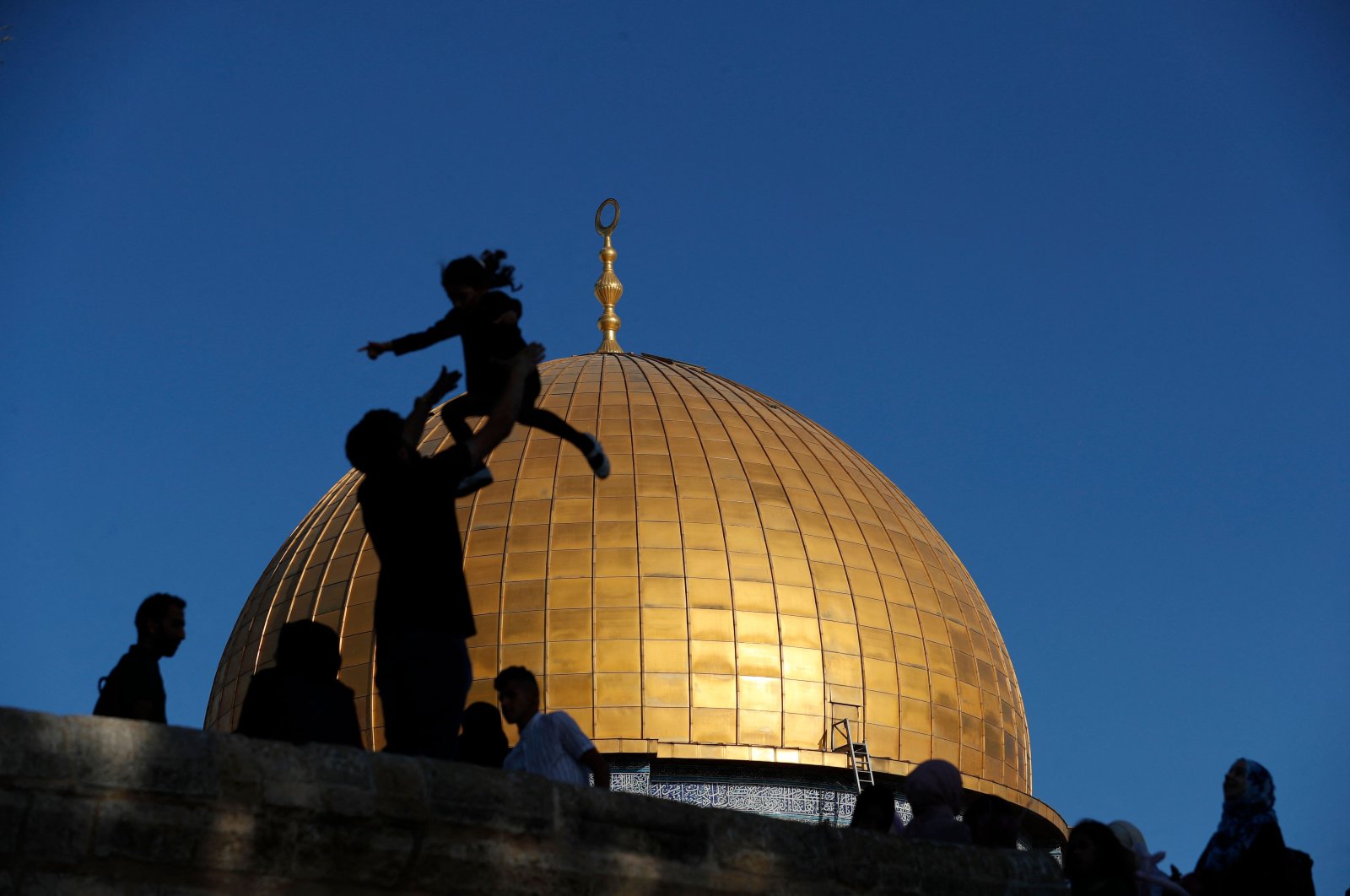 Muslim worshippers are silhouetted while celebrating in front of the Dome of the Rock mosque before the morning Ramadan Bayram prayer, which marks the end of the holy month of Ramadan, at the Al-Aqsa Mosques compound in Jerusalem, May 13, 2021. (AFP Photo)
by ASSOCIATED PRESS May 13, 2021 9:02 am
RECOMMENDED

Muslims on Thursday celebrated the second consecutive Ramadan Bayram, also known as Eid al-Fitr, under the shadow of the COVID-19 pandemic.

This year the holiday marking the end of Islam's holiest month of Ramadan also comes amid Israeli violence against Palestinians and continuous assaults on the Al-Aqsa Mosque, one of the holiest sites for Muslims.

Worshippers in Turkey headed to mosques wearing masks to perform communal bayram prayers while practicing social distancing. Imams also called on the attendees to refrain from carrying out traditional family visits amid the pandemic.

Indonesia, the world’s most populous Muslim-majority nation, allowed mosque prayers in low-risk areas, but mosques in areas where there was more risk of the virus spreading closed their doors, including Jakarta’s Istiqlal Grand Mosque, the largest in Southeast Asia.

Indonesians and Malaysians were banned for a second year from traveling to visit relatives in the traditional Eid homecoming.

In Bangladesh, however, tens of thousands of people were leaving the capital, Dhaka, to join their families back in their villages for Eid celebrations despite a nationwide lockdown and road checkpoints. Experts fear a surge in cases in a country grappling with a shortage of vaccines and fear of Indian variants of the coronavirus spreading.

“I understand that we all miss our relatives at times like this, especially in the momentum of Eid,” Indonesian President Joko Widodo said in televised remarks. “But let’s prioritize safety together by not going back to our hometowns.”

With no congregational prayers at mosques, no family reunions, no relatives bearing gifts and cookies for children, “Eid is not a grand event anymore,” Jakarta resident Maysa Andriana said. “The pandemic has changed everything... this is too sad!” she said.

In Malaysia, Prime Minister Muhyiddin Yassin unexpectedly announced another nationwide lockdown from May 12 until June 7 to curb a spike in cases. Interstate travel and all social activities are banned, which means that like in Indonesia, Muslims cannot visit each other or family graves.

Muhyiddin acknowledged that many are angry with the lockdown but defended the need for drastic measures, saying hospitals have almost reached their capacity.

Meanwhile, weary Palestinians prepared for a somber bayram, as Gaza braced for more Israeli airstrikes and communal violence raged across Israel after weeks of protests and violence in Jerusalem.

Israeli airstrikes have struck around 600 targets inside Gaza, the defense military said.

The current eruption of violence began a month ago in Jerusalem, where heavy-handed Israeli police tactics during Ramadan and the threatened removal of dozens of Palestinian families from their homes by Jewish settlers ignited protests and police attacks on Palestinians. A focal point was the Al-Aqsa Mosque, built on a hilltop compound that is revered by Jews and Muslims, where police fired tear gas and stun grenades at protesters.

The violence has set off violent clashes between Arabs and Jews in Israel, in scenes unseen in more than two decades. Israel's Prime Minister Benjamin Netanyahu warned that he was prepared to use an “iron fist if necessary” to calm the violence.

But violence erupted across the country late Wednesday. The Jewish mobs attacked the Arabs in the central city of Lod, the epicenter of the troubles, despite a state of emergency and nighttime curfew. In nearby Bat Yam, a mob of Jewish nationalists attacked an Arab motorist, dragged him from his car and beat him until he was motionless.

Many Muslim-majority countries slammed Tel Aviv for the violence and called for an immediate stop to the Israeli aggression.